Local jobs at stake as Deane Transport goes into administration 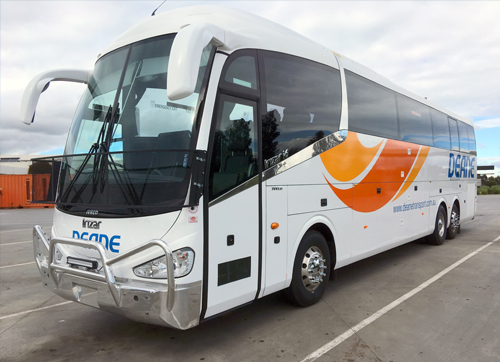 Queanbeyan-based charter bus operator Deane Transport has gone into administration in a bid to restructure the debt-laden business.

It has appointed national restructuring firm Vincents as administrators but will continue to trade while seeking a new partner.

“We’d love to see a new player come on board to assist in the restructure,” he said.

Administrator Tony Lane says the outlook for restructuring the company, which employees about 17 casual and full-time workers, was positive.

“The debt position of the company meant that current operations were going to become unsustainable,” he said. “The decision to appoint an administrator gives the company the best chance of restructuring its operations and keeping local jobs intact.

“There’s over a dozen local jobs at stake here. We’ll be doing all we can to work with the existing operators and other interested parties to see the business preserved and those jobs maintained.”

He said there was a range of factors involved in the company’s predicament rather than any one cause or failure, saying it had been a victim of its own success.

“They’ve grown quite rapidly over the past four years. The financials exhibit strong revenue growth but it’s a tale of a lack of working capital,” Mr Lane said.

He said the company had managed to exploit a niche in the local and regional market and was relatively well positioned as far as its competitors were concerned.

Mr Lane said the revenue numbers contradicted any claims that the state of the economy may have played a role.

He praised the attitude of the directors and said administration was an opportunity to rebirth a business that had developed a strong reputation.

Deane posted on social media that the company was working closely with the Administrator to ensure uninterrupted service while the business continued to trade as usual.

“Our Board and all our staff are committed to ensuring that our excellent reputation for quality service is not diminished, and you will see no change to the way in which we continue to deliver market-leading service,” it said.

“We want to thank you all in advance for your kind words of support and encouragement during this stressful period. As many of you will know, being in business has its challenges and rewards – we expect this process to be rewarding as we emerge stronger and better from this phase; however, it is still a challenge … but one we’re up to.”

“We’re all extremely positive about our future as the Canberra Region’s #1 choice operator and with your ongoing support, we will maintain that position.”

Deane Transport Services is a family-owned bus and coach charter company that services the Canberra and Snowy Mountains regions.

Qcity Transit Pty Ltd are sorry to hear the news that Deane Transport have gone into voluntary administration. We understand the challenges of the competitive transport market. We would also like to clarify the current confusion in the marketplace. Qcity Transit and Transborder Express are not in anyway affiliated with Deane Transport and will continue to deliver quality services under contract to Transport for NSW for route and school bus services, ACT Government for rural school student services, and charter and special events.

thank you for the clarification

Maybe they should try operating under the Transport Canberra financial model with massive taxpayer subsidies, new $500,000 busses and no weekend services.

It’s a “winner” in Canberra according to our government.

Just for those who seem to be confused, Deane Transport Service are a private charter company and are still operating as normal! QCity that used to be called Deanes a couple of years ago are the local public transport company for Queanbeyan, local public school routes. 2 seperate companies

Katie Beck Thank you Katie I had no idea of the change!

Katie Beck me either. That made it easier to understand

I was about to say, I've passed multiple deane's busses this week.

Trading as usual it says!

Courtney Matthew that the bus that parked down the street

Jason Matthew yeah I was gonna tag you in it.

Cherry, will this be a problem for you?

I mean for work.

Cherry Bailey phwew. Hope the home front busses are ok for you as well.

No buses to googong any more first to go school runs are to bee keeps,

William William QCITY will continue to run school busses out of Googong. This situation has nothing to do with them. QCITY are a completely different business/Company. Deans is a private charter business.

Bummer - we need our public transport

Deane's also do the school runs for the kids located outside the the ACTION bus routes. They are a private company contracted to do public transport as well.

Todd they are contracted by the ACT government to do the outlying area school runs for all schools - Hall, Tharwa, Uriarra, etc. This means they are filling a public transport role that will have to performed by either ACTION or another contractor if they move from administration to receivership.

Michael Croft no they are not contracted to offer school runs by the ACT Government. QCity that used to be named Deanes, names changed a few years ago, does do school runs that support Canberra surrounding suburbs. Deane Transport Services are a private coach company that supports touring school groups, weddings, winery tours, long distance group transfers etc.

https://www.transport.act.gov.au/getting-around/rural-services - Michael, feel free to check the information on Transport Canberra's page regarding your incorrect statement

Thanks all for the clarification. My confusion is because a bus clearly labelled "Deane" picks up kids on the Uriarra run just past my farm gate.

Dwayne Still - 44 minutes ago
Lucky to escape View
Chris Durban - 11 hours ago
A warm welcome, my best wishes for their future lives here. I hope they settle in and find peace and happiness 🤗... View
Cheryl Clare Riordan - 12 hours ago
What a lovely photo of gratitude and relief .... View
News 32

Hunter Smithers - 56 minutes ago
Staring at your speedo instead of watching the road is far safer for pedestrians !! View
Bob Foster - 8 hours ago
You had me till the 2nd sentence of your 2nd paragraph Gai Wil THEY need to realise that roads were built for cars etc, and a... View
Matt Flagget - 9 hours ago
Tony Siciliano yep, us too - gone. Born, raised and lived most of my life in Canberra but it’s green/left underbelly is rot... View
News 23

Tom Wills - 6 hours ago
Jorge Gatica Dont rent your house then, simple. Pay for it off your own back rather than the backs of tenants. Actually stick... View
jorie1 - 10 hours ago
Agree Realist. Landlords in the ACT are not treated fairly. I guess the proof is in the lack of rental properties available.... View
Rob - 10 hours ago
This article seems to misunderstand some basic investment concepts: “But the main reason for owning rental properties is no... View
Lifestyle 32

Il Padrone - 8 hours ago
Costanza Maffi what is this fascinating attraction that cockatoos have for alpacas? 🤔 View
Sophie Patterson - 9 hours ago
James, I love the namea View
Mark Dennis - 13 hours ago
Lee Hearn have I got a deal for you!! 🤣🤣🤣 View
News 11

Rob - 11 hours ago
You missed their best wine: the sparkling Shiraz. It is just magnificent and I think the only one in region. Worth the trip o... View
Sport 24

Sher Bee - 13 hours ago
No playing with anti vaxers. View
show more show less
*Results are based on activity within last 7 days

An old well has been unearthed in Queanbeyan during excavations on the new precinct for Queanbeyan-Palerang Regional Council (QPRC). Bulldozers...
Lifestyle 32

With the ACT Government's revenue from traffic infringements predicted to more than double this financial year, a standing committee has...
Opinion 27

Don’t let his title scare you: Jonathon Colbran has been helping businesses stay afloat for 20 years