Lyn Mills on Canberra, community, and the pictures that say a thousand words 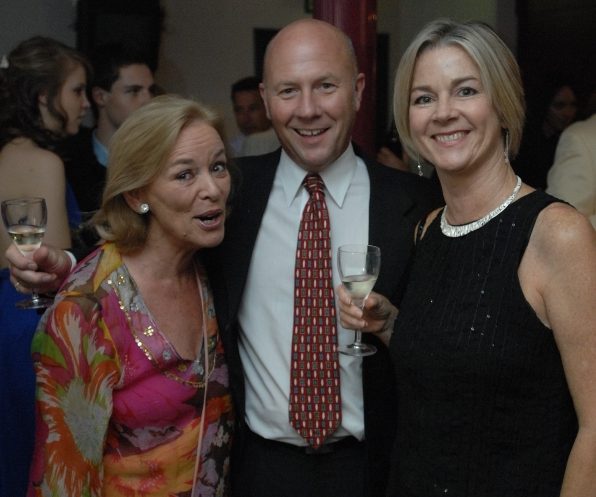 Longtime social photographer Lyn Mills (left) has always been the life of the party. Photo: CATawards.com.au.

The legendary Canberra Times social photographer has always known where the bodies were buried, who was who, and how to do a good turn for the right people. And she has ink in her veins: her father was a Canberra journalist with the old Melbourne Argus, considered at the time the national paper of record, and then Sir Robert Menzies’ press secretary.

Lyn herself was born in New York when her father was posted there at the end of the war. Her mother had been through the fall of Singapore and the family was also posted to Papua New Guinea. 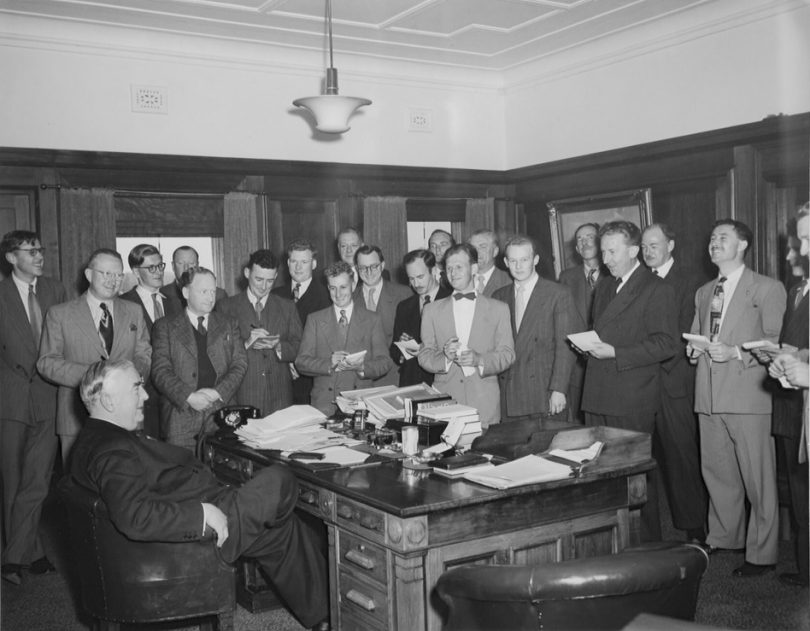 But back in Canberra, the press gallery at Old Parliament House became her childhood stamping ground, and there’s where the media fascination really began to take hold.

“We’d be there constantly to pick up all the teleprinter messages,” she remembers. “It seemed to me like a huge room at the time.” When the gallery was reopened as part of the Museum of Australian Democracy restoration, she reminisced with Alan Reid’s son about Reid Sr, “the Red Fox”, and his legendary ilk.

“I think we’re the only ones left that knew the old place as children”, she says.

Television was her first media career. Lyn fronted the ‘David Jones Notebook’ segment on CTC 7, a half-hour weekly program she produced and presented “anything and everyone from David Frost down”.

“I had the best time with that because I had complete free rein. I could interview anyone I wanted who came to town,” she says. Nobody was making anything remotely similar and Lyn says it “rated better than Kojak“, as she combined a television career with producing a couple of children.

“The camera was at chin level so I sat there with my great big fat belly out of shot. There was no faffing about being pregnant, I worked so long that Sam was nearly born on the set.” 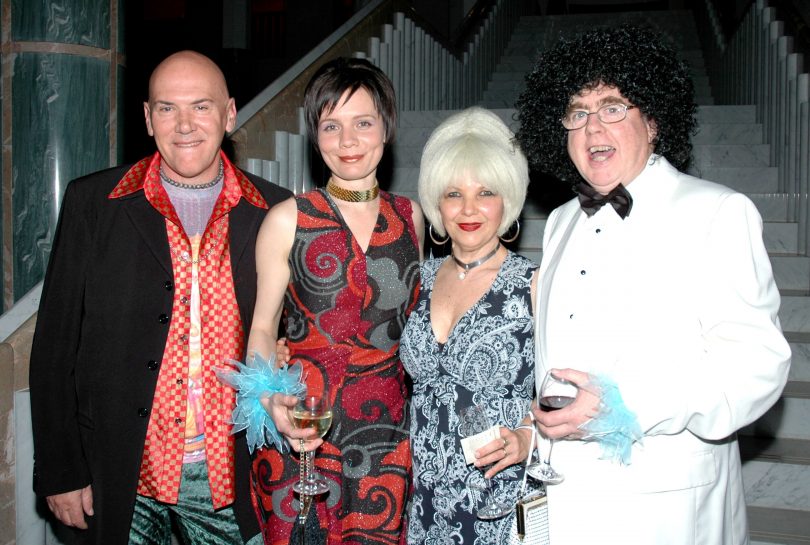 Multi-tasking is nothing new for her.

“I’ve always had about three things going at once,” she says. These included the Faces beauty salon in Woden Plaza, restaurants and a modelling agency. In 2001 she went to The Canberra Times, initially as a social columnist tailed by a photographer.

Lyn’s taken photos all her life, beginning with the childhood gift of a Box Brownie.

“I started on Cronulla beach, taking photos of seagulls and shadows,” she says. But when the Times requested seven pages of socials each week, the sidekick disappeared and Lyn’s role evolved from capturing the local “glamourpusses” to documenting how the community functions. 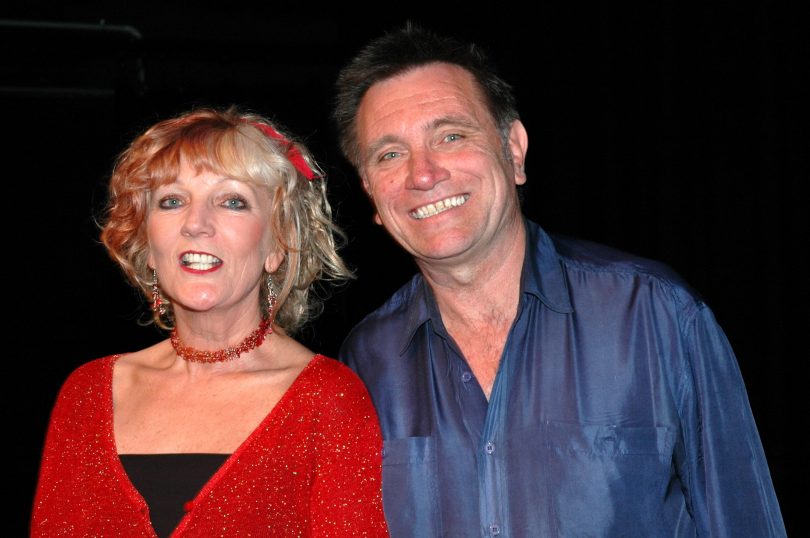 “The work became so much more complex than just snapping the powerful people,” she says. “I went to an incredibly wide range of events from the John Curtin Medical School at the ANU, to the theatre, to fundraisers for everyone trying to do some good in town.

“I met a huge number of people from right across Canberra – and that’s why I go to the shopping centre in disguise!

“This has always been a small town in many ways … and you have to connect with everyone. I found I rarely got a knockback because people are at events for a purpose.”

Lyn loved photographing “flamboyant arts people” and adores musicians. I was there when jaws dropped as she left an after-party at the Canberra Theatre with rock legend Tex Perkins (he’d gallantly offered to walk her to her car).

But she also values those behind the scenes who make things happen, like Canberra Pops Orchestra founder and musician Ian McLean – “that man is worth his weight in gold” – or Cultural Facilities Corporation CEO Harriet Elvin and longtime philanthropists John and Rosanna Hindmarsh.

“So many of those people just give and give to the city,” she says.

These days Lyn photographs the Press Club lunches (“they were just about kissing Kevin McCloud’s feet earlier this year, and he had the best pair of shoes I’ve ever seen on a man”) and we’re working with her and her remarkable archives at Region Media.

“I don’t want to ever stop,” she says happily. “If you do, you’ll fall off your perch.”

What a good looking couple!!

Thanks Margaret Brodrick...but it was a very long time ago!

Wow. A blast from the past!

Such wonderful memories of Lyn's work from my time in Canberra.

Hello Lyn Mills, you have ALWAYS done well in everything you have put your hand too!

John Goodwin - 3 hours ago
29th April 1770 was when an explorer landed /discoverd Australia View
Chris Hobbs - 6 hours ago
Unless I'm missing something, James cook landed in botany bay on 29th April 1770. The first gun shot was fired on this day. I... View
Linda Stapleton - 12 hours ago
Changing the date will just be like reconcilliation day.. it becomes a nothing action. remember when they said we had to have... View
Community 6

Lucy Baker - 3 hours ago
Michelle Langsam please share to church? View
Robyn Jones - 7 hours ago
Where is it located View
Monica Tiffen - 7 hours ago
I find it hard to put a light-bulb in!!!!! View
News 5

Peter Major - 8 hours ago
Hugo Young Ride in single file and comply with ALL road rules, do not impede the flow of traffic and there are minimal proble... View
Kirby Haines - 8 hours ago
lol sure, costs 10x in admin what it would recover in revenue. Where do you draw the line? Are you going to insist some gorml... View
Hugo Young - 9 hours ago
Adam Jovanovic I'll be sure to suggest to my cycling club that we start running groups rides on paths. A group of 15 people t... View
Opinion 53

Adam Jovanovic - 9 hours ago
Daniel Burden Government owning up to its own mistake buahahha View
HiddenDragon - 10 hours ago
Unless there's a nice little quid pro quo coming up for the ACT in the next federal Budget (dream on....), this outbreak of "... View
Opinion 21

@The_RiotACT @The_RiotACT
Sweet Piper had a litter of puppies when she was only a baby herself, and is now at @rspcaact waiting to find her forever home https://t.co/VHBQOCXP4f (10 hours ago)