The Kings Highway is once again closed east of Braidwood between Monga and Nelligen as the Currowan fire on the south coast impacts the area. The highway is also closed between Braidwood and Warri.

Live Traffic NSW says the highway at Nelligen was closed at 11:23 am and will remain closed in both directions until further notice. Residents of Nelligen will be allowed access.

The highway at Braidwood has been closed in both directions since yesterday.

At 1:54 pm, the Araluen Rd was closed in both directions between Braidwood and Moruya on the south coast. Residents of the area will be allowed access at the discretion of emergency services.

Meanwhile, the North Black Range Palerang fire continues to burn to the west of Braidwood and is spreading in multiple directions.

The NSW RFS says that conditions eased overnight, which allowed firefighters to conduct backburns and work to slow the spread of the fire.

Their latest advice is that the fire is burning in a north-easterly direction towards the Kings Highway in the Warri area. Crews are working to slow the spread of the fire.

“Westerly winds and very low humidity are forecast today,” the NSW RFS website says. “This is expected to increase fire activity throughout the day and may place pressure on containment lines, especially in the north-east area of Colombo Road, Larbert Road and Kings Highway (south of Shoalhaven River), and to the south area near the Tallaganda Forest, north of Cooma. 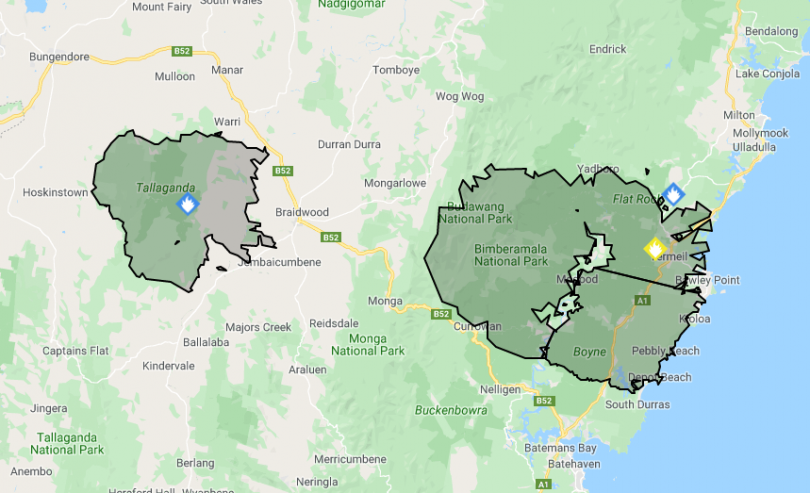 The Currowan and North Black Range Palerang fire grounds as of 10:00 am on Friday 6 December. Photo: NSW RFS website

The North Black Range Palerang fire has returned to ‘watch and act’ level after being listed as an emergency fire earlier today.

He said spot fires continue to burn in the areas of Mount Elrington, Bendoura or Wallaces Gap.

“The fire is burning in a north-easterly direction towards the Kings Highway. Crews are working to slow the spread of the fire,” Mr Marks said.

“The fire is also spreading in a south-easterly direction and has crossed the Cooma Road in the Elrington area.”

The Kings Highway remains closed to the northwest of Braidwood, between Deloraine Lane and Mayfield Road.

Here's the view from above – the North Black Range fire near Braidwood. Difficult conditions but amazing work by firefighters and residents protecting property where possible. #nswrfs #nswfires pic.twitter.com/Wwe9BOc175

Further advice from the NSW RFS is:

Posted by The RiotACT on Wednesday, 4 December 2019

The village of Majors Creek south of Braidwood is bracing for a renewed threat from the North Black Range Palerang bushfire, with gusty westerly winds fanning the blaze which was spreading in multiple directions.

NSW Rural Fire Service spokesperson Darren Marks says the fire has been upgraded to Emergency level on Thursday afternoon, with spotting in the north along the Shoalhaven River and in the south over Cooma Road in the Farrington Road area.

The RFS has units deployed to protecting property in the Larbert Road area.

The bush fire is burning through the Tallaganda National Park, and the Bombay and Braidwood areas, is more than 27,300 hectares in size and is being controlled.

Mr Marks said the fire was about 8 km from Braidwood but the area in the middle had been bolstered in recent days.

“We’ve done a lot of work there in the past few days, so that’s good protection for Braidwood,” he said.

But with the potential for the fire to run, Majors Creek was an area of particular concern and residents had been told to implement their bushfire survival plan.

“If they are not prepared we want them to have left already,” he said.

The RFS is advising people in the Mount Elrington, Bendoura or Wallaces Gap areas to seek shelter as the fire approaches. It advises those in Harolds Cross, Majors Creek, Reidsdale and Jembaicumbene to monitor the situation.

For those in the north-east of the fire, in the areas of Six Mile Flat, Warri, Manar, and along the Kings Highway between the Shoalhaven River and Black Sally Lane, and your plan is to leave or you are not prepared, leave now towards Braidwood.

Mr Marks said the battle today had been to deploy firefighters to tackle breakouts and spotting fuelled by the wind.

“We’re managing to hold these fires but we are expecting this sort of pressure to continue for another five hours,” he said.

The winds were not expected to ease until well into the evening and there was an ongoing risk.

“We have a real risk today and people need to be prepared and actively ready to defend their properties if fire approaches,” Mr Marks said.

The RFS have 170 firefighters on the ground and seven aircraft in the air attacking the blaze, as well as plenty of heavy machinery building containment lines.

For travellers, Mr Marks has this advice: “I’d be not planning to head through Braidwood this weekend.”

In Majors Creek, it’s a waiting game for those who have decided to stay.

Publican of the The Elrington Hotel, Kate Mitchell said most people who had wanted to leave had already done so and others with fire plans were waiting to see what movement there was across the Cooma Road before deciding what to do.

People were calm but “sick of waiting”.

The video below has the latest information from both the North Black Range and Currowan fires, as of 4:00 pm on Thursday, 5 December.

Graham Byrne - 9 hours ago
I was wondering what all those cameras were about. They are everywhere. But I’d rather see more red light cameras. View
Property 14

JS9 - 9 hours ago
Absolutely agree Brendan. Unlike some on here who seem to see apartments as almost the work of the devil, I don't mind densif... View
HiddenDragon - 10 hours ago
Hooray! - we're one of the richest (on paper) countries in the world with one of the dumbest economies - having dropped from... View
bj_ACT - 16 hours ago
ACT Government should be mandating apartment buildings with 3 bedrooms or large two bedroom units with multiple living areas.... View
News 7

Mike of Canberra - 10 hours ago
Over many years, the only consistency I've seen from the green-left is their apparent dislike of ordinary working people actu... View
News 6

steve2020 - 11 hours ago
The disrespect towards women had been encountered in many workplaces that I had worked in, in Canberra. The irony is that bec... View
jybrik - 19 hours ago
What a thoughtless, demeaning comment. "So, get over it" is a sentiment that we as a society should be fighting against, as i... View
Business 1

Nick Swain - 12 hours ago
Even in the hardest lock down time Green Square was the place to hang out - there was a strong sense of community. Many of us... View
Community 25

Bernard - 22 hours ago
Problem ACT Government have with promotions and perceptions (possibly the realities) of conflicts of interest are nothing new... View
News 12

Capital Retro - 22 hours ago
Given we were told last year's hot, summer weather was the new norm, does this mean this year's coolest summer in 10 years sh... View
Kay Makin - 23 hours ago
Amanda McLean this looks like one of your beautiful water paintings. View
Motoring 2

keek - 23 hours ago
Yeah, you basically have to ride like everybody else on the road is trying to kill you. People trying to change lanes on top... View
Lifestyle 29

Jackie White - 23 hours ago
There's always one or two hanging around my place each year, but without fail, they wander into the neighbour's yard and her... View
Food & Wine 10

Roasted garlic ice cream, pistachio and cherry essence, spearmint and salted caramel - these were the ice cream flavours that...
Property 14

The ACT Government has promised a greener, safer and passenger-friendly Woden Interchange, with plans lodged for the $35 million project....
News 31

@The_RiotACT @The_RiotACT
Canberra has been discovered. Let's hope we can relish the opportunities and overcome the challenges that brings, says Ian Bushnell https://t.co/0Nbtm98Tn1 (53 minutes ago)

@The_RiotACT @The_RiotACT
What do you think of Allycorn? The giant pink unicorn will grace Canberra's skies as part of the Canberra Balloon Spectacular! Here's where you can catch this fantastic creation, and say hello to Skywhale and Skywhalepapa https://t.co/6Nw9532xSJ (11 hours ago)

@The_RiotACT @The_RiotACT
With a long weekend coming up in the ACT, there’s lots to see and do in Canberra as Enlighten gets into full swing https://t.co/FoK8puPWeE (12 hours ago)