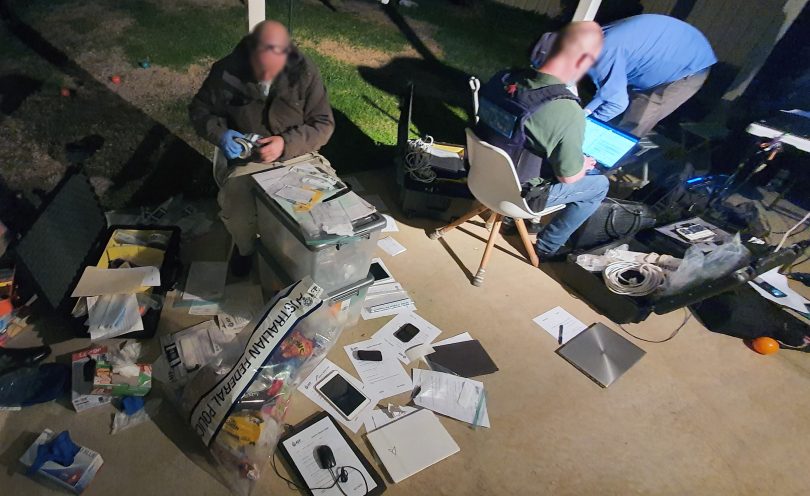 AFP investigators collect evidence at the man’s home during the execution of a search warrant. Photo: AFP.

A 32-year-old Blacktown man has been charged over a spam email campaign against the Labor candidate in the Eden-Monaro by-election, Kristy McBain.

The Australian Federal Police arrested the man during a raid at his house and later conveyed him to Parramatta Police Station. He was charged with one count of using a telecommunications service to menace, harass or cause offence, contrary to section 474.17 (1) of the Criminal Code Act 1995 (Cth).

The man was released on police bail and is due to appear before the Blacktown Local Court on 2 September 2020.

The AFP launched the investigation following a report from the Electoral Integrity Assurance Taskforce and the Australian Electoral Commission on 10 June 2020.

The spam emails, which appeared to be from legitimate sources, had been sent from an unidentified user to the Australian community and various organisations, and were assessed as offensive and harassing in nature.

The AFP investigation identified that a number of telecommunications services had been subscribed to using suspected fraudulent identification documents. Investigators will allege in court that these activities were linked to the 32-year-old man.

The bizarre emails targeting Ms McBain claimed that God had forsaken Eden-Monaro and linked her to the prosecution of Cardinal George Pell. The latest one said Ms McBain had withdrawn from the race because she had contracted COVID-19.

All the major candidates and the Australian Catholic Bishops Conference condemned the emails.

Richard Orchard - 11 minutes ago
Retail space is always troublesome to rent out- it’s either that landlords want rents and leases, with personal guarantees,... View
chewy14 - 3 hours ago
JC, $60million a year for one stage of light rail that services a tiny minority of the population. With the government commit... View
Margaret Tuckwell - 3 hours ago
Nobody owns the whole buildings, but individuals so hard to enforce rules. View
News 63

Finagen_erection - 27 minutes ago
It’s simply a result of poor investments by governments (plural) and failures in leadership within CHS. The CEO has quit, t... View
Kimmy Hunter - 2 hours ago
Well your very lucky because I had a family member told they can’t access nsw health and had treatment refused View
JC - 4 hours ago
Christian your $35 is not a co-payment that is you paying your doctor more than what Medicare pays then. The proposed co-paym... View
News 12

Capital Retro - 57 minutes ago
Here's something that hasn't been mentioned before: A study suggests that electric cars can create almost twice as much ozone... View
News 9

Richard Grainger - 2 hours ago
That building is simply storage. The cost that the Archives desperately need funding for is to digitise the records. A lot of... View
Louise O'Donnell - 8 hours ago
Yes that is the repository, or storage area. The files (paper, digital, and so forth) need to be stored somewhere safe and en... View
Community 1

Tyson Powell - 4 hours ago
Tyler Greening look at him doing so much more View
Sarah L Yoong - 4 hours ago
Great story which many of us can relate to. Well done Alan! View
Michael Rose - 6 hours ago
Congrats Alan for owning your story and the business! All the best View
Sport 19

@The_RiotACT @The_RiotACT
Messages of condolence are flooding in for the family and friends of a Canberra man killed while watching the Finke Desert Race near Alice Springs on Monday https://t.co/sDzPaNDQvg (20 minutes ago)

@The_RiotACT @The_RiotACT
A 29-year-old woman will face numerous driving charges after a serious crash south of Queanbeyan that led to a passenger having a leg amputated https://t.co/S0Fhm1Zhsu (1 hour ago)

@The_RiotACT @The_RiotACT
The @NatGalleryAus plans to renovate its grounds and gardens which it says are no longer befitting of a national cultural institution https://t.co/gr04AD29T3 (1 hour ago)