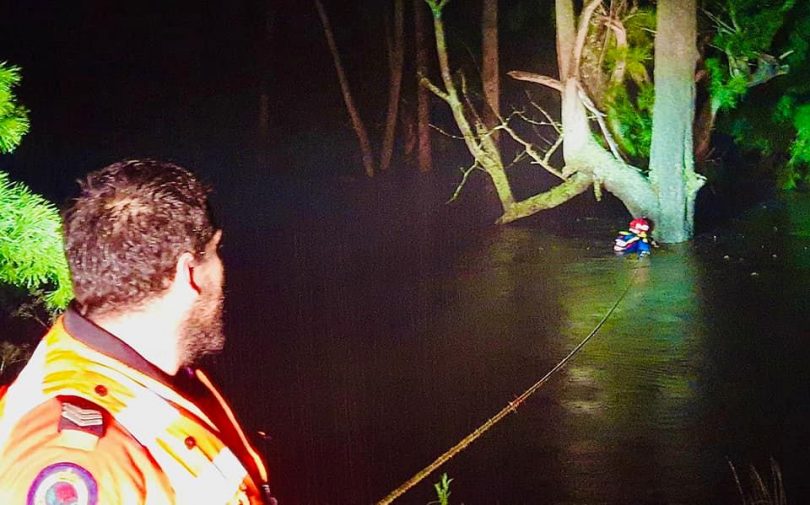 SES members rescuing a man who clung to a tree in the flooded Brogo River overnight. Photo: Bega Valley SES.

A man was “barely hanging on” to a tree for more than 10 hours when NSW State Emergency Services (SES) crews made a successful rescue from floodwaters north of Bega in the early hours of this morning (11 February).

NSW SES spokeswoman Sharon Fox told the ABC, “The message from police was quite clear, he was barely hanging on”.

“It’s really important that people don’t attempt to enter these floodwaters as it can end quite badly,” she said.

The man had been clinging to a tree in the Brogo River since 6:00 pm last night when a passer-by spotted the man and alerted authorities just before 4:00 am.

The Bega Valley SES said three SES members from Queanbeyan-Palerang and four from Bega Valley used a boat to rescue the man about an hour later.

The rescued man was transported to South East Regional Hospital at Bega.

“Conditions in the Bega, Brogo, Bemboka and Towamba rivers and all surrounding creeks and waterways are dangerous this morning,” a Bega Valley SES spokesperson said.

“Significant volumes of water and strong flows are still being experienced in some locations.”

The Brogo Dam, which was at 10 per cent capacity a few days ago, is now full and spilling over.

Staff from Bega Valley Shire Council are assessing the road network for damage; however, the following roads are currently closed:

The NSW SES responded to 500 calls for help for flooding and fallen trees overnight, bringing the total number of call-outs during the recent rain event to more than 12,000.

Got to love a flowing Bega River!!!

Naimad Doowneerg - 2 hours ago
Bernard Miller not sure what you mean by "shear (sic) volume of adverse events and deaths". According to the TGA There have b... View
Garvin Francis - 2 hours ago
Nada Krstin So here’s totally what wrong with this whole anti vaxx, anti mask, anti lockdown argument. Its not about believ... View
Deborah Gale - 8 hours ago
Nada Krstin The vaccine gives protection and greatly reduce the likelihood of serious disease which is great. But children wh... View
Lifestyle 16