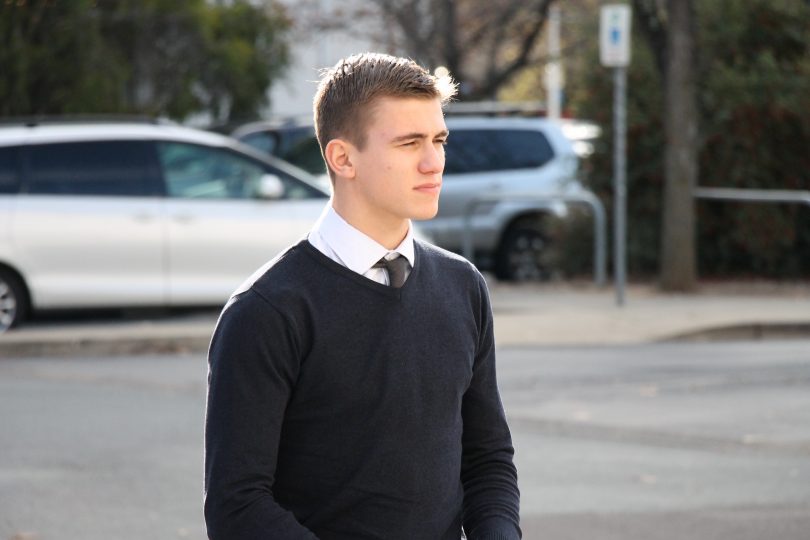 UPDATED: A not guilty verdict was recorded by the jury in this matter.

JUNE 16: A man allegedly continued to have sex with a young woman after she told him to stop, reportedly telling her, “it’s not rape if you enjoy it”.

Hayden Smedley, 21, denies the accusations and is facing a jury trial in the ACT Supreme Court after pleading not guilty to a charge of having sex with the woman without her consent.

On Tuesday (15 June), prosecutor Keegan Lee told the jury Smedley met the woman on the dating app Bumble in early 2020 when she was 17 years old, although she said she was 18 on the app.

Mr Lee said in April 2020, she decided she wanted to meet him in person for the first time and have sex with him.

Smedley sent her his address and she drove to see him at the two-storey house in Gungahlin he shared with several housemates.

He met her at the front door and they went into his bedroom and started watching Netflix together.

The two began to have consensual sex but stopped after it became painful for the woman. They then began to watch television again.

But Mr Lee alleged Smedley got back on top of the woman and told her: “I’m not done with you yet”.

Smedley allegedly raped the crying woman, despite her saying “stop” and that the sex was hurting her.

Mr Lee said she later fled the house to her car and called her aunt while crying hysterically.

“I told him to stop, but he didn’t,” the woman said she told her aunt.

In an interview with police, footage of which was played to the court, she also alleged that after he began raping her and she told him to stop, he said, “it’s not rape if you enjoy it”.

“I thought he was joking because he was laughing when he said it,” she said.

She said the alleged incident had left her feeling violated and scared.

“I realised it was probably the right thing to do to tell someone,” she said.

Mr Lee said Mr Smedley admitted he had sex with the woman but said it was consensual.

He said Mr Smedley said the woman appeared to be uncomfortable at one stage and he offered to stop having sex, but she declined.

Mr Lee also said Smedley agreed he used the word “rape” but said he had done so because he was trying to joke around.

Earlier, Justice Michael Elkaim had told the jury he expected the key question in the trial was going to be whether or not the woman had consented to the sexual activity.

The trial is expected to run for several days before Justice Elkaim.