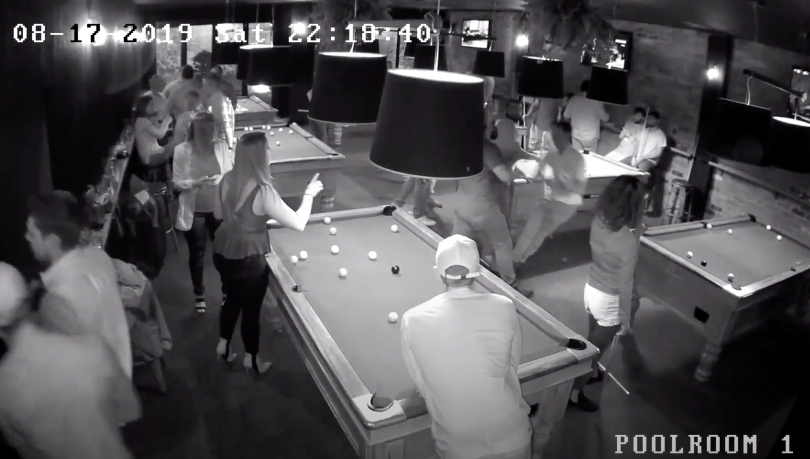 CCTV still of the fight at Civic Pub that left a man with traumatic brain injury. Image: Screenshot.

An electrician who coward punched a man leaving him in hospital for 75 days has escaped spending time in jail.

Zane Daniel, 26, walked out of the ACT Supreme Court on Tuesday (15 June) after he was sentenced over the brutal attack in the Civic Pub that left his victim with a severe traumatic brain injury.

Before he left, Justice Chrissa Loukas-Karlsson reminded him of the “tragic consequences” his attack had on his victim.

“Your life goes on in the same way, but the life of the victim does not, Mr Daniel,” she told him.

“Imagine your life now. And I want you to think about that every day.”

Justice Loukas-Karlsson found him guilty of causing grievous bodily harm over the attack, outlined in her judgement released earlier this year. 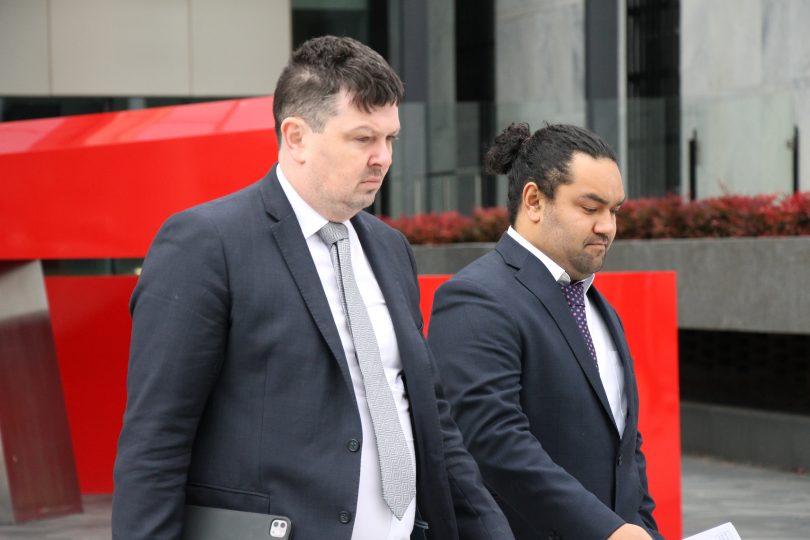 On the evening of 17 August 2019, Daniel was playing pool at the Civic Pub with his partner and friends.

But when Daniel and the victim’s girlfriend were taking shots at their tables, their pool cues got in the way of each other’s, and tension escalated until the victim walked over to speak to Daniel’s girlfriend across a table.

The man immediately fell to the ground, unconscious. Daniel turned back to his group and finished his drink before he and his friends tried to leave.

Closed-circuit television footage tendered to the court and provided to Region Media shows the attack.

The victim was taken to Canberra Hospital with life-threatening injuries, and active resuscitation was needed to save his life.

The man’s injuries included a severe traumatic brain injury and post-traumatic amnesia that lasted for 38 days after the attack.

In the ACT Supreme Court on Tuesday, Justice Loukas-Karlsson said the man had been left with “extreme injuries”.

A report said the ongoing impact of the assault on the victim included mild to moderate hearing loss, mild cognitive impairment and mental and physical fatigue.

An intensive corrections order (ICO) assessment report found Daniel’s behaviour was influenced by his anger at the time of the assault, but he had expressed regret and had not minimised his actions.

His employer gave a reference to the court, saying he was surprised to hear about the case because he had never known Daniel to be violent towards anyone and Daniel was now ashamed and embarrassed by what he had done.

Justice Loukas-Karlsson sentenced Daniel to three years and six months’ jail to be served by an ICO, a community-based sentence. He must also serve 500 hours of community service.

“The offence you have committed is a very serious matter, Mr Daniel,” Justice Loukas-Karlsson told him.

“The consequences for the victim are appalling.

“You would not want someone to behave as you did towards you, a member of your family or one of your loved ones.

“To end up in hospital for 75 days and have a traumatic brain injury, it’s unacceptable.”

While Daniel has been living in Carwoola, outside Queanbeyan, he must move to Canberra to serve his ICO.

Frankly, it’s crazy that thuggish violence like this is rewarded with a slap on the wrist and a finger-wagging lecture from the presiding judge.

Society is to blame.

How the hell does he not get jail time? Seriously need to hold these woeful judges to account when decisions like this are made. Hopefully this sentence (or lack of it) gets appealed and justice is served.

Another great sentencing outcome by our courts that will really provide a great disincentive to individuals in the community who may find themselves in similar situations in the future.

Capital Retro - 35 minutes ago
Will it be named after Sam Stosur? View
Community 46

Zoe Lewer - 36 minutes ago
Bob Foster yep. Us humans sure have made an impact. We are the problem. You are right. The day the people who were invaded ch... View
Joy Gosden - 43 minutes ago
Yes. What were they thinking planting them in our suburbs. They drop limbs attract pests and stop grass growing around them.... View
Bob Foster - 1 hour ago
Another deluded hypocrite post Zoe Lewer 😂 I'm betting you live in a man made structure....made with either cut down trees... View
Opinion 64

Chris Montgomery - 37 minutes ago
Brian Ashcroft they only blow over cause their root system is higher than they should be. Most eucs that blow over are on fro... View
Chris Montgomery - 43 minutes ago
Gertraud Bell All the big Eucalyps were there before all the housing went in. So??? your saying to remove all native trees an... View
Mark Gledhill - 2 hours ago
how long will the eucalypt hate continue? this sounds like treescrimination to me! View
News 46

phydeaux - 43 minutes ago
Buy the way TheSilver, I nearly forgot to mention this with regard to your supposed other scenario https://pubmed.ncbi.nlm.ni... View
phydeaux - 59 minutes ago
A few points if I may, starting with your first post in this sub-thread where you start: ".... is literally no good evidence... View
TheSilver - 5 hours ago
Yes, I'm aware there are observational and laboratory studies. I am sceptical of those because it isn't obvious how transfera... View
News 1

@the_riotact @The_RiotACT
The ACT has recorded 620 new cases of #COVID-19 in the 24 hours to 8 pm yesterday. Of those, 61 people are in #hospital, with five in #ICU and one person requiring ventilation https://t.co/yrOFhW3j7d (33 minutes ago)

@the_riotact @The_RiotACT
#Moncrieff residents are pushing for the ACT Government to remove a #smelly and hazardous 'sludge pit' from their backyard. The petition has already attracted more than 400 signatures https://t.co/fW6ONtnb5f (39 minutes ago)