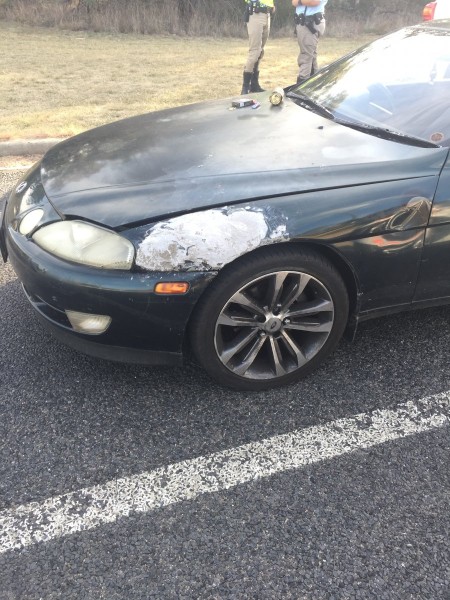 A 26-year-old man appeared in ACT Magistrates Court on Thursday charged with nine offences, including driving while unlicensed, drug driving, failing to stop for police and dangerous driving.

Aubrey James Agostino did not apply for bail and was granted a four-week adjournment to seek legal advice.

The charges arose after police attended a residence in Downer on Wednesday following reports of a burglary.

A 1991 dark green Toyota Soarer with stolen number plates was seen leaving the area prior to the arrival of police.

The vehicle was further sighted during the day in Ainslie, Lyneham and Kaleen, before being located by police on the Tuggeranong Parkway.

Agostino has also been charged with three counts of burglary and using an unregistered, uninsured and unsafely maintained vehicle, and plates calculated to deceive.

Investigations are continuing into other offences committed by the offender on Wednesday.

Members of the public who can assist police with their investigations should contact Crime Stoppers on 1800 333 000 or via act.crimestoppers.com.au quoting reference 5950840.

If he has 2 or more priors, he needs to be locked up for 20 years.
Sick of these scumbags.

ChrisinTurner - 1 hour ago
It is amazing how the number wishing to return home has remained constant despite over 100,000 returns. View
Food & Wine 2

Gassed - 1 hour ago
Shame I thought they were going to sell actual chilli's not just sauces... View
Brisal - 6 hours ago
I can't wait to check out the new store! View
News 13

dulynoted - 1 hour ago
the electricity market in australia seems rigged, we pay way more for electricity than other countries with similar generatio... View
Capital Retro - 2 hours ago
Then there is the "thermal runaway" risk if these things catch fire: https://stopthesethings.com/2020/03/01/giant-batteries-b... View
Ol L - 3 hours ago
This would be great however I foresee yet another hike in electricity prices if it goes ahead View
Food & Wine 50

Ol L - 3 hours ago
Buying to rent out doesn’t make sense in Canberra. The government costs make for a poor investment, however across the bord... View
Property 1

whatwik - 4 hours ago
"And when these materials do arrive, they have been going missing from job sites, builders told Region Media" When our renova... View
Property 1

Nat Smith - 7 hours ago
I know people that are waiting for two bedroom houses for 7 years . They have not replaced civic Kingston or narrabundah apar... View
Food & Wine 5

JC - 11 hours ago
So so true. With social media such as this type of site and Facebook etc so many political decisions these days are about opt... View
JC - 11 hours ago
If they are renting an ACT government property and no longer have a need for a property that big then yes they should be move... View
Lifestyle 26

Jacq Miller - 15 hours ago
shame there are no longer all 4 in situ View
Barry Matson - 17 hours ago
of what? View
show more show less
*Results are based on activity within last 7 days

When it comes to stalwarts of the Canberra hospitality industry, few could rival The Old Canberra Inn on Mouat Street,...
Sport 18

@The_RiotACT @The_RiotACT
The National Folk Festival is looking for a new general manager at a precarious time for the annual Easter event https://t.co/MXXAch4FnU (26 minutes ago)

@The_RiotACT @The_RiotACT
The community has rallied around St Bede's Primary School in Red Hill and the Catholic Education Office has guaranteed its future until 2023 https://t.co/6BGz14wswR (56 minutes ago)

@The_RiotACT @The_RiotACT
Thursday is Earth Day. How will you be reducing your environmental impact? Let us know in the comments https://t.co/pI1fN2E9hj (1 hour ago)