The man will face court on five charges, including driving at police. Photo: Michelle Kroll.

A 29-year-old Kambah man who allegedly evaded police, resulting in a helicopter search of West Basin at around 3:00 am on Monday (28 December), will face the ACT Magistrates Court today charged with several offences, including driving at police.

At about 12:25 am on Monday, police were alerted to a black Hyundai Tuscon in the area of Limestone Avenue, Ainslie. Checks on the vehicle revealed it to be stolen, and police attempted to affect a traffic stop on the vehicle.

Police followed the Hyundai to Hackett Place, Hackett where two women ran from the vehicle to a waiting silver Kia Sportage allegedly being driven by the 29-year-old man.

Police arrested the two women at the scene and attempted to stop the Kia from leaving the area.

At about this time, police allege the man drove at police and failed to stop.

Police allege the Kia then travelled through the City and onto Parkes Way before coming to a stop on the Kings Avenue Bridge at about 1:15 am.

A man and woman fled the Kia. The woman was located and arrested by police a short time later. Police followed the man, but he then jumped into Lake Burley Griffin.

Extensive resources were deployed in and around the lake to locate the man, including AFP Maritime and the Toll SouthCare Rescue helicopter. ACT Fire & Rescue and the ACT Ambulance Service also attended.

Following a police investigation, which included DNA testing, a search warrant was executed at a residence in Kambah on 31 December, and the man was arrested.

He will face a total of five charges: driving a motor vehicle at police; failing to stop for police; driving while disqualified; theft; and obtaining property by deception. 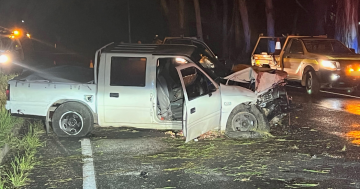