Crickets fans will get to see two finals of the Big Bash League at Manuka Oval this weekend. Photo: Michael Weaver.

Canberra cricket fans will again be treated to first-class cricket action as Manuka Oval comes to the rescue of the Big Bash League, with two finals to be held there this weekend.

Limitations around travel for teams in and out of Sydney due to ongoing state border restrictions means Manuka Oval will host a double-header of games this Saturday and Sunday nights.

Canberra’s adopted team during the Big Bash – the Sydney Thunder – will play an elimination final on Sunday evening against the winner of the Brisbane Heat and Adelaide Strikers on Friday (29 January) in Brisbane.

The top two BBL teams, the Sydney Sixers and Perth Scorchers, will face off on Saturday night for the right to go straight into the BBL grand final on 6 February at a venue to be confirmed. 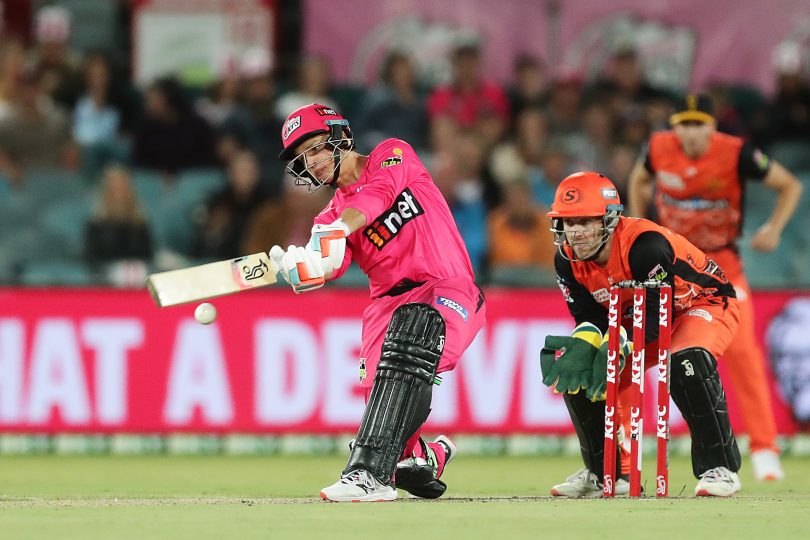 Josh Philippe of the Sixers during the BBL match against the Perth Scorchers at Manuka Oval on 16 January. Photo: Mark Metcalfe/Getty Images.

Manuka Oval has already hosted 10 BBL games this season, and this weekend’s finals are sure to attract fans from Sydney after the ACT Government lifted travel restrictions for all but one local government area.

The Thunder and Sixers nominated Canberra’s Manuka Oval as their preferred venue to host finals, while Canberra fans of the Sydney Thunder have flocked to Manuka Oval to support the team in lime green.

Ground staff at Manuka Oval have been on stand by since the most recent match there on 18 January and have been ready to be called into action at a moment’s notice.

There is a chance Sydney could host a final next week – either the final if the Sixers win through to host that, or the challenger final – but that decision has been delayed.

Cricket Australia’s Head of the Big Bash Leagues Alistair Dobson said the finals series marks the crescendo of an extraordinary summer of Big Bash, with 115 matches played so far across seven states and territories.

“Whether watching from home or in the stands, our fans have enjoyed arguably one of the best KFC BBL seasons ever, with more overseas stars and exciting new rules helping to produce a number of thrilling finishes throughout the summer holidays,” Mr Dobson said.

“We now move to the Finals series and extend our congratulations to the Sixers, Scorchers, Thunder, Heat and Strikers on their performances so far this season. We know their fans will be flocking to the grounds the Finals series to urge them on.

“We’d also like to acknowledge the Hurricanes, Stars and Renegades whose understanding, flexibility and commitment allowed us to execute a full season under the extraordinary requirements that come with sport in the current climate.”

Manuka Oval has hosted 12 games of cricket this summer, including two internationals between Australia and India prior to 10 Big Bash games.

Tickets to all matches will be on sale at cricket.com.au/tickets.