UPDATED: We’ve got a double pass to this for a lucky premium member. Just send an email to root@the-riotact.com with your userid to go in the running. Entries close 5pm Friday 29 May.

3 BORN AND BRED CANBERRA ACTORS RETURN HOME WITH THEIR “UNDERGROUND CULT HIT SHOW” FOR 3 NIGHTS ONLY!! 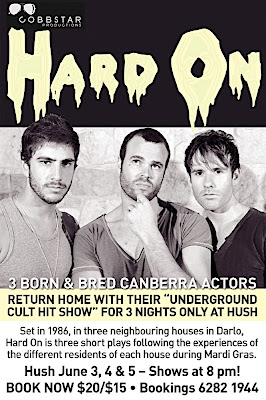 HARD ON @ THE HUSH LOUNGE

Hard On was the underground cult hit of the Sydney Gay and Lesbian Mardi Gras 2009, selling out the two week run and enthralling audiences with their crazy Mardi Gras antics.

Conceived and Directed by Wanniassa boy Brian Cobb, who is fresh from producing his first feature film, this ensemble cast of 8 includes 2 born and bred Canberra actresses, Miranda O’Hare and Jane Porter.

Fadden girl, Miranda O’Hare is fresh from a guest role on ‘Packed to the Rafters’ and ABC’s ‘The Cut’. Miranda doubles as both Producer and Actress in Hard On.

Forrest girl, Jane Porter returns home from her critically acclaimed role in The Crucible where she wowed audiences in her role as ‘Goodie Proctor’.

HARD ON is set in 1986 on the eve of the Mardi Gras parade. 3 houses on Bourke Street open their doors for our amusement as the “Gay Bachelor Of the Year” picks up a one night stand who out stays his welcome, the lesbians next door hold a party that goes incredibly wrong, while across the road the local Unicorn in denial about his sexuality decides to come out to his flatmates.

This was an enjoyable night out – thanks muchly for the tix Riotact. Did anybody else see this? Was the unicorn a metaphor/figment of his imagination … and if ‘yes’, why did the other flatmate also interact with the unicorn also? Or were they both figments? I actually asked the playwrite after the show … and she said ‘it can be whatever you want it to mean’ (which perhaps means that she doesn’t know either). Deep.

yeh just noticed the update bit then sorry about that
Thanks

hey stonedwookie..
no spam going on here, just an update with a competition for premium members!! jump on board!! you may get something out of it. nice name by the way.

I absolutely think it is worth seeing. I saw it in Sydney and it is such a fun night. Set in the 80’s, doesn’t take itself too seriously, has an edge of seriousness…. I’ll be there for sure.

So BC is it worth seeing?

i saw a duck once.

Has anyone seen this?

Andrew Wadey - 19 minutes ago
Same thing in so many sports, like A-League who keep stringing supporters along and then find some justification to do whatev... View
Martin McMaster - 25 minutes ago
Who needs to start winning? View
Neil Chandler - 2 hours ago
Peter Bee true, but they produce some great players and there is a fanatical enough fan base that it would be a worthwhile ve... View
Opinion 7

Brisal - 19 minutes ago
"If you want to maintain that sense of community, less worrying about what other people might be doing is probably a good pla... View
Futureproof - 2 hours ago
Ditch Facebook and you will be much happier. Facebook is a morale vampire... View
Sam Oak - 2 hours ago
The majority of Canberrans either have moved from interstate or have links such as family in other states. It already became... View
News 123

Capital Retro - 20 minutes ago
I don't think Murrays Buses are "public transport", Leon and the only modes are buses and trams, the latter goes only in one... View
Craig Webb - 2 hours ago
Greg Donoghoe thats well and truely faster than an old plastic cab with a gardiner straight 8 in it! View
Greg Donoghoe - 2 hours ago
Yvoir Hingee maybe you need to give it a try now. Very enjoyable way to travel to Sydney. No traffic to put up with & very co... View
Property 2

Ian Jessup - 1 hour ago
Maureen Ryan yeah it is. Both Q and WW punch well above their weight in sport View
Maureen Ryan - 4 hours ago
Ian Jessup that's a bit rough View
News 27

Capital Retro - 1 hour ago
......"do they look like they are getting married." Anything is possible now, in Canberra.... View
Cheryl Boyd - 2 hours ago
Kangaroos will go into water if they have been bitten by a snake. Hope it was taken to a vet to get checked over. View
Property 15

Mikey Moore - 2 hours ago
I would be more than happy to have something like this in my area. Unfortunately, the NIMBYs at WVCC oppose anything over 2 s... View
News 16

@The_RiotACT @The_RiotACT
A Kambah pizza bar has been identified as a close contact #exposure site in the latest list from @ACTHealth, while supermarkets across the ACT are named as #casual or monitor for symptoms sites https://t.co/LKRHn7xAFZ (1 hour ago)

@The_RiotACT @The_RiotACT
Zed Seselja's Senate seat may be vulnerable, according to new polling from the @TheAusInstitute, but ousting him will be a big ask https://t.co/0HDjhrW54O (1 hour ago)