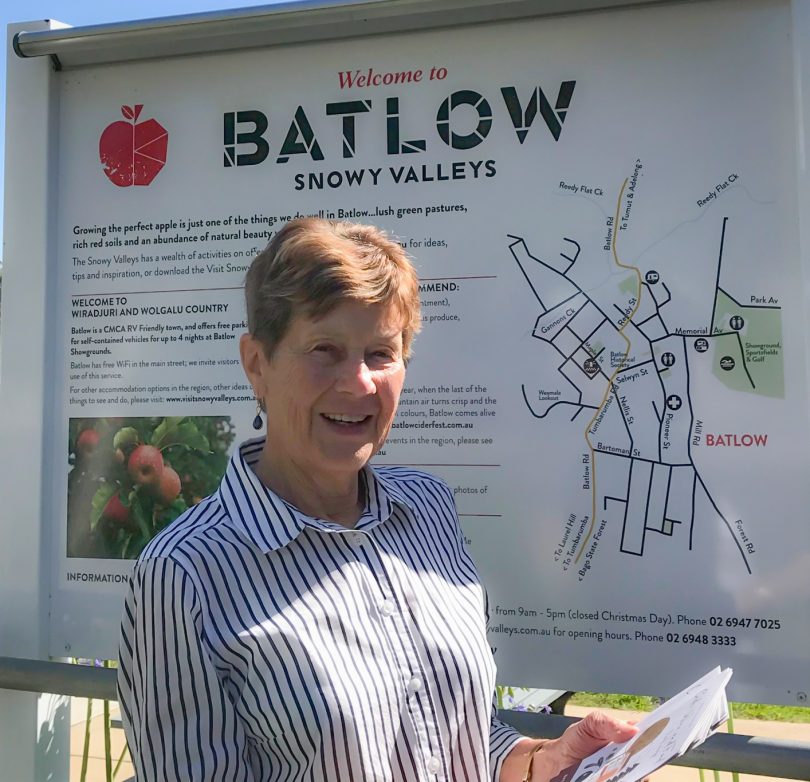 It’s the apple of Batlow’s eye, and there are high hopes a new self-guided High Country Cider, Wine and Food Trail will help clinch the Snowy Valley town’s spot on visitors’ agendas in coming months.

The freshly minted idea is the brainchild of one of Batlow’s long-time residents, Margaret Sedgwick, and it comes in the form of a map currently being distributed to shops, countertops and visitor centres in the region in a bid to get business booming.

“It was one of those ideas that comes to you in the middle of the night when you can’t sleep,” Margaret tells Region Media. “I was thinking about how we could help the town and then it dawned on me.

“I thought it’s probably a good thing to give businesses a bit of a boost in the Batlow and Tumbarumba area.”

So Margaret went straight to the ‘Do it for Batlow’ committee, which was formed in the aftermath of the Black Summer bushfires, which threatened to raze the town, and amid the shadow of COVID-19 which decimated the high hopes for a rehabilitated economy.

“They’re a very active and positive organisation,” she says. “They’re younger people, smart, enthusiastic, and they get things done. I’ll thought I’d hand over the idea to them.

“But they said to me, ‘Margaret, it’s a good idea, but sorry, that’s not how we operate – you’ve got an idea, you have to develop it because we’re not leaving everything to a few people.’”

Her genius had been returned to sender. 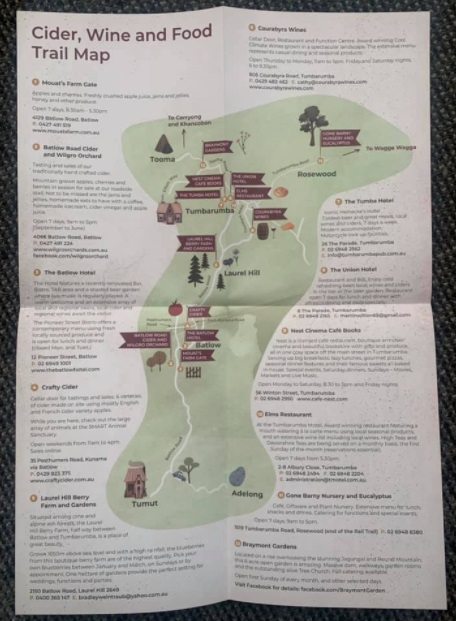 The High Country Cider, Wine and Food Trail map takes visitors on a journey through Snowy Mountains towns and villages. Photo: Do it for Batlow Facebook page.

“So I thought, ‘Fair enough,’ and then wondered what I’d got myself into,” she says.

But it wasn’t long before rubber hit the road and Margaret was travelling throughout the Snowy Valleys Shire and beyond in a bid to create a cider, wine, food, accommodation and event guide showcasing the best of the region to visitors.

“I found it most enjoyable travelling around talking to the different businesses who either have cellar doors or food,” she says.

“The criteria was that establishments had to feature Batlow ciders or Tumbarumba wines. So we were able to include hotels, restaurants and cafes that sell those ciders and wines.”

The completed trail map features 12 businesses of varying nature, all with local food, cider and wine that sell to the public.

“Unfortunately, due to the bushfires some of the cellar doors at Tumbarumba have not reopened, but I hope by the end of the year they’ll have wines to sell and can be included in a future trail map,” says Margaret.

The hunting and gathering of information was one thing. Next came the design and printing.

Margaret worked with Wagga Wagga firm Chambers Whyte Design and Print, and a graphic designer by the name of Jo Long.

“All credit to them, especially Jo, because she has come up with brilliant designs,” she says.

Margaret is personally involved with the distribution – to a new town each day.

“The reception has been amazing and Tumut just called yesterday looking for a box of 400 brochures,” she says.

Today, she is off to Tumbarumba for her next delivery and to continue spreading the word.

Jimbo Lambert - 1 minute ago
Justo Justo some people have driven that stretch of road for 30 or 40 years at 60km/h. If they suddenly reduce the limit it i... View
Dean Soccol - 1 hour ago
Nathan Grieve in Queensland every time we get a fine we lose points. So if you are one of those that don’t care about the m... View
Nathan Grieve - 2 hours ago
Andrew Nelson not every offence comes with demerit points, so unfortunately that statement is incorrect View
Community 8