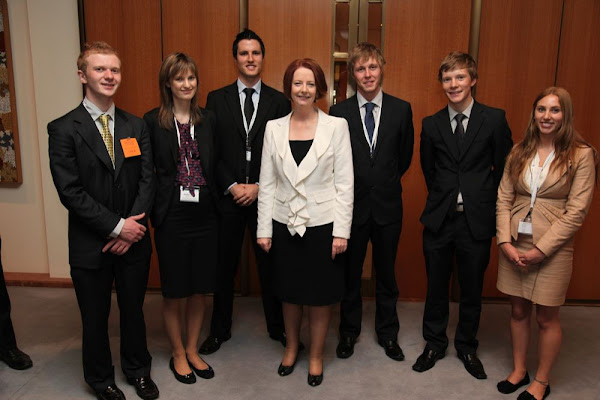 Congratulations to Marie-Alice McLean-Dreyfus (second from the left). ANU has announced that she has been selected to attend the G20 Youth Summit in Washington. Marie-Alice is a fourth year Bachelor of Arts and Asia-Pacific Studies undergraduate who will be joining five other young Australians attending the Summit this June. They will be making up the Global Voices G20 Australian Youth Delegations, established to promote the participation of young Australians in international diplomacy.

“Attending this summit will allow me to put my skills and knowledge of the world economy and global development into practice,” she said.

Marie-Alice will also be studying in Taiwan this September as a recipient of the 2012 Prime Minister’s Australia Undergraduate scholarship.

Marie-Alice, as a young person, how about grilling the Prime Minister when you see her about why she is supporting the decision to keep a 16-year-old in Albany’s high-security jail, somehow convicted of being a deckhand on a refugee boat – when the Indonesian authorities have authenticated his age?

David Riddell - 3 hours ago
Unless interstate waste is banned from Mugga the waste could still be accepted even should CRS facility becomes operational.... View
Alex Troy Elsworth Adkins - 5 hours ago
Marea Fatseas the site is on the railway line with exsisting sidings thst would allow waste to be transported by rail to Tara... View
JC - 5 hours ago
Maya the land in question used to be a petrol terminal. I wouldn’t call that light industrial and that terminal had been th... View
Lifestyle 1

Karin Foxwell - 10 hours ago
Frank Valzano hear hear! As an Art Therapist working with veterans with PTSD I can only imagine how that sort of money could... View
David Stephens - 12 hours ago
But if your head is in the sand you might come a nasty gutser. Moving on has its drawbacks. View
Smackbang - 16 hours ago
What a coincidence - your opinion is also irrelevant, and yet here you are offering it. View
News 7

rationalobserver - 11 hours ago
3 points; No sane person would raise the topic of Defence force help in the same breath as raising the possibility of a law s... View
Simon Lynch - 1 day ago
I'd check the facts first Kerry. At the time there was no fire in ACT and yet your wonderful Administration hired the helicop... View
News 1

Capital Retro - 11 hours ago
Slowly but surely all cell-phone challenged reception areas in our region are being addressed. Last week the new Telstra 4Gx... View
Sport 20

PaulWalshe1 - 13 hours ago
Great article Tim, it was a special day for AFL in Canberra. The ACT had only 3 VFL players - Jezza, Ian Low and Queanbeyan's... View
Business 20

Capital Retro - 14 hours ago
I don't know who is going to read it then JC. I suppose the hardcore lefties and self-appointed experts who contribute almost... View
JC - 1 day ago
The paper is still going to be made. View
Rebecca Hosking - 1 day ago
Jane Larkin Naomi Feuerherdt Kim Beaumont This is a bit sad 😥 Remember our team photos on the massive reams of paper 😊... View
News 29

@The_RiotACT @The_RiotACT
Our latest newsletter has all the top stories of the week wrapped up, from the return of COVID-19 to articles about black cockatoos, Tik Tok clips & controversial rock art https://t.co/PHRxmoBngx (1 hour ago)

@The_RiotACT @The_RiotACT
One of Queanbeyan’s oldest ever residents, Linda Moore, died peacefully last weekend at the age of 105 https://t.co/TULostP4NV (2 hours ago)

@The_RiotACT @The_RiotACT
While parents across Australia breathed a sigh of relief when children went back to school after weeks of learning from home, education departments had to ensure schools were COVID-safe. And it wasn't cheap https://t.co/vpuD1LJfd5 (4 hours ago)