Mariners and Phoenix to clash in Canberra 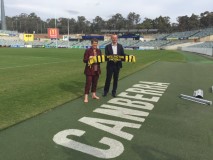 Canberra will host an A-League match between Central Coast Mariners and Wellington Phoenix later this year.

The clash at GIO Stadium is likely to take place in November in the early rounds of the 2016/17 season.

Canberrans have demonstrated an appetite for elite sports in recent years, especially football.

There were strong crowds at Canberra Stadium for the Asian Cup matches in January 2015, including two sell-out games, and another bumper crowd for the Socceroos’ World Cup qualifier at the same venue in November when Tim Cahill fired home the second in a 3-0 victory against Kyrgyzstan in front of 19,412 fans.

The Mariners have enjoyed strong connections with the capital in recent years.

Current Socceroos and Celtic star Tom Rogic played his junior football with Tuggeranong United and at senior level with ANU and Belconnen United before joining the A-League club for two successful seasons in 2012.

Central Coast played two A-League home matches in Canberra in 2009, beating Perth Glory and Adelaide United, and in the 2015/16 pre-season the club spent a week in the capital where they played against Canberra Olympic and Gungahlin United and participated in a range of community activities and coaching clinics.

ACT chief minister Andrew Barr joined with the mayor of Wellington Ms Celia Wade-Brown to announce the clash and raised the prospect of further national league games in the capital in future seasons.

“I’m delighted that the Central Coast Mariners have partnered with the ACT Government to bring this clash to Canberra, and I hope to see many more A-League games in Canberra over the coming years,” he said.

Mr Barr added the fixture announcement was further evidence of the strong relationship developing between the two capital cities, which will be linked by direct international flights starting later this year.

“There are a number of opportunities for economic and cultural exchange when direct international flights connect Canberra and Wellington from September,” he said.

“We have already announced that the Australian cricket team will face New Zealand later this year at Manuka Oval, with New Zealand fans able to travel directly to Canberra to watch the match and enjoy our city in the summer months.”

Mayor Wade-Brown said she was delighted to see further links developing between Wellington and Canberra.

“The Anzac capitals have much in common,” she said. “The best city relationships have connections on every level: economic, political, tourism, environmental, cultural and sporting.

“This game is an excellent opportunity for Wellingtonians and Phoenix fans to take the Singapore Airlines direct flights across the ditch to Canberra to see the match. They can enjoy a weekend in Australia’s capital, which has so much to offer in the way of museums, galleries, outdoor activities and shopping.”

Capital Football president Mark O’Neill said hosting an A-League match would have a range of benefits for football in Canberra.

“This match presents a significant opportunity for Capital Football to develop relationships and continue to grow our future prospects of bringing the A-League to Canberra on a regular basis,” Mr O’Neill said.

“We see this is a first step towards forming a long term strategic partnership with the region,” he said.

“We are committed to doing as much as we can in the lead-up to help community football grow and our partnership with Capital Football will help us achieve this.”

GWS Giants are not out-out-towners. It was always joint team between WS and Canberra.

However, I want an A-League team of our own, and not these NSW teams visiting teams here when money is waved.

The Raiders once played in QBN between 1982-1987 dont forget. NSWRL team

Name me two GWS players who are permanent residents of Canberra.
Their presence in Canberra is limited to the games they are contracted to play for huge amounts of ratepayers money that is “waved” at them.
The Canberra Raiders had Seiffert Oval as their venue until the Stadium at Bruce was available. There was no other venue before than that was suitable (for “international” matches either).
Seiffert Oval is closer to a lot Canberrans that Bruce Stadium is.
How many times has Canberra tried to get an A League soccer team? It’s just like that blue sky tram, not needed and not viable.

GWS Giants are not out-out-towners. It was always joint team between WS and Canberra.

However, I want an A-League team of our own, and not these NSW teams visiting teams here when money is waved.

The Raiders once played in QBN between 1982-1987 dont forget. NSWRL team

There are strong overtones in this report that the ACT government is planning to “do a GWS” with the Central Coast Mariners.
We can’t afford another “out of town sponsorship” and just how much is it going to cost us to stage the Central Coast Mariners and Wellington Phoenix match? What are the economic benefits?
While the government comments on the pluses of selling Canberra to Wellington residents when the direct flights start, the Wellington Regional Economic Development Agency appears to be first out of the blocks in “unapologetically and shamelessly wooing us into visiting or moving to Wellington” through the inclusion of the Autumn/Winter Wellington Guide in today’s Sunday Canberra Times.
No doubt our tourism special events man in the ACT government is on top of this.

Matt Sposito - 16 minutes ago
Sending their guys interstate with buckets of junk...... Should have just sent personel amd found trucks for them. I believe... View
Mario Vozella - 1 hour ago
Disgraceful, cost cutting has caught up with governments now, this fire escalated very quickly that day, people madly trying... View
Sport 18

John Mair - 20 minutes ago
I was there and celebrated that night. The VFL Pres. Allen Alyett declared that they would never have multi Rep teams again.... View
News 51

Russell Nankervis - 57 minutes ago
Have you tried to lobby them to do something or are you only complaining because it is an election? View
Breaking 30

Lynn Stape - 1 hour ago
well this went from bad to worse and very quickly didnt it...four now, unless they have gotten another one in the last few ho... View
O L - 8 hours ago
I’d be more worried about the eight inbound commercial passenger flights arriving in Canberra today. Who is so important th... View
Angie Fearon - 10 hours ago
Steven citation requured. Also, what is the cost for every life lost? A family in mourning & an associated economic effect.... View
Business 2

Tim Primmer - 1 hour ago
It was a ploy by the owner to shut it down.. Hope he has the money to pay out redundancy and long service leave.. View
Alan Rose - 1 hour ago
What a shame, it was a staple under my cat litter box for years. Lol. With all the online news these days you don’t really... View
News 5

Lynn Stape - 1 hour ago
I am very pleased we chose not to live in the general area of this... good luck to those who live anywhere close to this. View
Trish Roberts - 2 hours ago
I thought this was refused?... View
Marea Fatseas - 8 hours ago
Ricky Toms it makes no sense to transfer all the waste currently going to Hume where it’s all set up for waste management a... View
News 1

Tara Jameson - 7 hours ago
A lot of these have over-wide staircases, I expect so that a stair lift can easily be installed. View
Kerry Jackson - 9 hours ago
Pity there are no single storey for downsizers. No one wants stairs as they get older. So little being built like that. View
Opinion 24

Spiral - 9 hours ago
ACT Labor has been in power so long that problems like this are their fault, aided by the Greens who have helped them keep po... View
Acton - 10 hours ago
This is a problem of your own making. The Labor/Greens ACT government have intentionally restricted land supply. Result: high... View
show more show less
*Results are based on activity within last 7 days

"For a restaurant that opened right in the middle of COVID-19 restrictions, we have felt the love," says manager Vidya,...
Breaking 0

Police have released the details of a 44-year-old man who died after an altercation at the Kingston Hotel on Sunday night...
Opinion 28

UPDATED 4:15 pm, 6 July: Victorians will be refused entry into the ACT from midnight Tuesday (7 July) and Canberrans...
Sport 18

@The_RiotACT @The_RiotACT
A troop of former Australian War Memorial officials opposed its controversial $500 million redevelopment will line up before a federal parliamentary committee next week https://t.co/2ChXETvyr1 (15 minutes ago)

@The_RiotACT @The_RiotACT
After a long shutdown, it seems likely that The Canberra Times' Fyshwick presses will be permanently closed as staff enter consultations with ACM management https://t.co/8ZWBfWKZJy (1 hour ago)