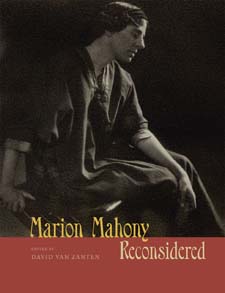 Marion Mahony Griffin (1871–1961) was an American architect and artist, one of the first licensed female architects in the world, designer for Frank Lloyd Wright’s Chicago studio, and an original member of the Prairie School of architecture. Largely heralded for her exquisite presentation drawings for both Wright and her husband, Walter Burley Griffin, Mahony was an adventurous designer in her own right, whose independent and highly original work attracted attention at a moment when architectural drawing and graphic illustration were becoming integral to the design process.

This book examines new research into Mahony’s life and paints a vivid portrait of a woman’s place among the lives and productions of some of our most noted American architects. The essays included take us on an ambitious journey from Mahony’s origins in the Chicago suburbs, through her years as Wright’s right-hand woman and her bohemian life with her husband in Australia — whose new capital city, Canberra, she helped to plan — up until her golden years in the middle of the twentieth century. Filled with richly detailed analyses of Mahony’s works and including and populated by an international cast of characters, ‘Marion Mahony Reconsidered’ greatly expands our knowledge of this talented, complex, and enigmatic modern architect.

Would be nice if Stanhopeless had spent some cash on a statue or some other commemoration of her contribution to Canberra rather than being so intent on celebrating that corrupt mafia trash Al Grasby.