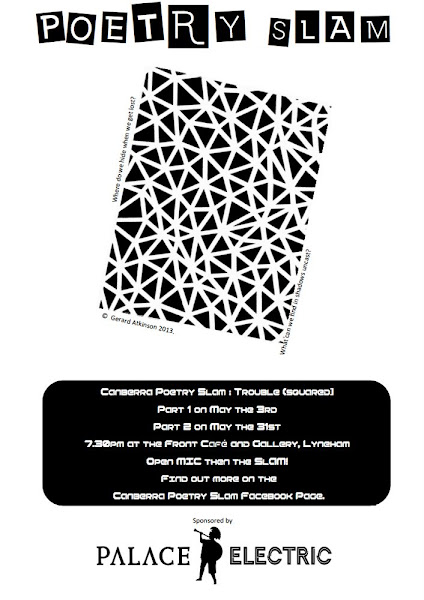 Part 1 starts Friday the 3rd at the Front Gallery. As with all our slams, we start with the open mic at 7:30 before moving onto the Slam.

The slam rules:
— 3 minute limit
— 1 poem that you have composed
— no props or musical accompaniment

Part 1’s featured performers are
Will Small and Azim Zain

Will Small runs the ANU Voice Poetry Slam workshop program for secondary students in the ACT. He is currently writing an English Honours thesis exploring the impact of hip-hop music and slam poetry in education. He represented the ACT at the Australian Poetry Slam in 2009. He’s pretty a big fan of words. Some of them can be found at: willsmall.tumblr.com

Azim Zain is a local indie singer songwriter who has been playing plenty of gigs around Canberra of late. you can check out his songs on Triple J Unearthed. http://triplejunearthed.com/azimzain

hosted by JC Inman and the Flying V

Two hosts for the price of none! Two features for a small donation.

Adele Craven - 3 hours ago
Renee Mae RiotAct has had lots of opportunities to understand and present up-to-date info, but have refused to - instead cont... View
Food & Wine 14

Dom Polegubic - 4 hours ago
Enjoy an evening with Andy Bernal Saturday the 19th of June at the Australian Croatian Club in Turner. Includes dinner and a... View
Opinion 5

Capital Retro - 5 hours ago
The "science" is yet to be proven. The main "tool" they have is computer modelling which can be contrived and most scientists... View
MERC600 - 8 hours ago
@maya did you receive your free roof insulation from that kind Mr Rudd ? Perhaps now with this insulation your hoose is a lit... View
Futureproof - 10 hours ago
There's science and there's follow the money science, like the great scientific mind of school drop out, Greta Thunberg, alon... View
News 62

Marisa Navarro - 7 hours ago
Linda Navarro i’ll just keep them! View
Bek Clark - 8 hours ago
Lucinda it depends on the category; and while it was a different specialty I can confirm, private specialist consult with a d... View
Paige Johnson - 9 hours ago
Why though? Shortage of staff/surgeon? I’m genuinely curious to know why. View
Community 3

Capital Retro - 13 hours ago
While getting the snow report from Thredbo this morning the ABC 666 presenter was reminded of building a "snowperson" in youn... View
News 40

@The_RiotACT @The_RiotACT
The ACT is looking to diversify the economics of the CBD as the work from home culture means fewer workers in city offices https://t.co/J1DoofRqD5 (6 hours ago)