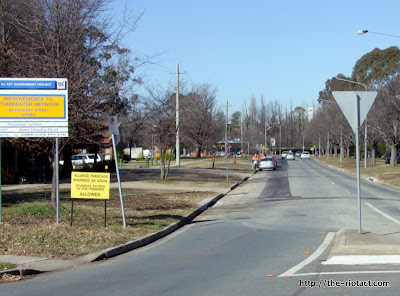 After living in the inner north for a few years now I’m still no closer to solving this little riddle – how should one pronounce McCaughey Street?

Is is McCorgi? Or perhaps it might be McCoffee. Or, a new theory put forward to me over the weekend, is it McCackey?

The street in question starts at Barry Drive before terminating at the roundabout on David Street. Thanks to the ACTPLA Place name search I can also tell you the street was named after Samuel McCaughey who was a “Pioneer pastoralist and philanthropist of New South Wales; early advocate of irrigation for pastoral as well as agricultural uses; MLC, New South Wales, 1899-1919; made generous bequests to the Universities of Sydney and Queensland.”

Hopefully someone can give me a definitive answer on the pronunciation.

I have only heard it pronounced once- I used to live on Stawell St (Store-well St, Stall St??) and my dog got out and my elderly neighbour said “I saw Kip sprinting down McCaughey [McCorgi] street”. What struck me as odd was not the pronunciation but the fact he chose to say sprinting rather than running.

Your surname is pronounced anyway you like it. The soccer player isn’t the only person in the world to pronounce it kay-hill. Remember Darren Cahill the tennis player? Pronounced the same as Tim’s surname

Perhaps we could ask Her Majesty? She corrected us about Manuka, afterall.

…by everyone except the Cahill family and (generally) those outside of South Australia. Jack Cahill, great Port Adelaide FC personality, and he or his son never call themselves Cay-hill.

“PS – Cahill is definitely pronouced ‘Karl’ unless you are a super-star football player and then, I guess… whatever…”

Your surname is pronounced anyway you like it. The soccer player isn’t the only person in the world to pronounce it kay-hill. Remember Darren Cahill the tennis player? Pronounced the same as Tim’s surname

If you type in “pronounce McCaughey” into Google, the 2 links before this page are:

McCaughey pronunciation: How to pronounce McCaughey in English

Which contains an auio file to listen to the pronounciation – ma-coi or McCoy as some other have said, and

Which says the correct way is – Mc Co(w)ee

So who really knows.

Nah, you’ve got it all wrong. McCoy circuit is in Acton. 😛

PS – Cahill is definitely pronouced ‘Karl’ unless you are a super-star football player and then, I guess… whatever…

lol Erg0. Least us Kiwis would have got Manuka right 😛

Smith & Caughey department store in Auckland is pronounced “Coe-ey”, but I suppose that New Zealanders aren’t the most reliable source when it comes to pronounciation.

Thanks bigcohuna1, that’ll do me.

My whippet’s pedigree name includes the name ‘Eoghan’. How do you pronounce that?

when I first came to Canberra i was given directions by people on how to cut throughthe back of turner & oconnor by taking “Mac cawghey” or “Mc Corgi” or “Mc Cowhey” street.

Had me stumped until i found out it was “Mac Ackey St ” (aka Mc Cackey St)they were referring to. No problems.

Sir Samuel owned plenty O’ property and was a smart businessman & philanthropist. His main property was at Yanco in the Riverina and he offered the first trials of irrigation. (also with pronunciation problems is Yanco or Yanko – depending on which side of the canals you reside on) When he died he left his main estate to the government to build a school (the mansion is the main building) – Yanco Agricultural High School.

Once had strong family links to the Mc Caughey family (older generations were employees and spoke highly if him) and in our family and other heaps of other folks I know it’s pronounced “Mc Ackey”. Silly I know but that’s the way it goes with celtic names I spose.

He also was going to invest in & bankroll some small business experiment in aviation in the early post WWI years that no one else wanted to know about but passed away before he had issued authority to his bank to transfer the fund$ – that was for some mob made up of two blokes with a little box kite of a plane – called QANTAS.

My whippet’s pedigree name includes the name ‘Eoghan’. How do you pronounce that?

McCoy and McCorkey, well I’ll be, hadn’t considered those two options. Thanks for that feedback.

Why don’t you thin the plot a little and give the Irish Embassy a ring?

I did try this mob, but the email bounced back, haha…
http://www.mccaugheycentre.unimelb.edu.au/

Given that there’s about 19 different ways of pronouncing ‘ough’ I imagine ‘augh’ could offer the same opportunity for variety. 🙂

I think you’ll find it’s pronounced ‘McCoffee’, sorta like that yucky warm drink you get at the drive-through.

Oh this is a fantastic thread!

I don’t think anyone who lives or works in Deakin pronounces Geils Court the same way. While working there I heard it pronounced like Gails, Jales, Giles, Jiles, Geels, Jeels… etc.

Do any of you brainiacs, pedants or nitpickers know the answer?

McCoy and McCorkey, well I’ll be, hadn’t considered those two options. Thanks for that feedback.

Why don’t you thin the plot a little and give the Irish Embassy a ring?