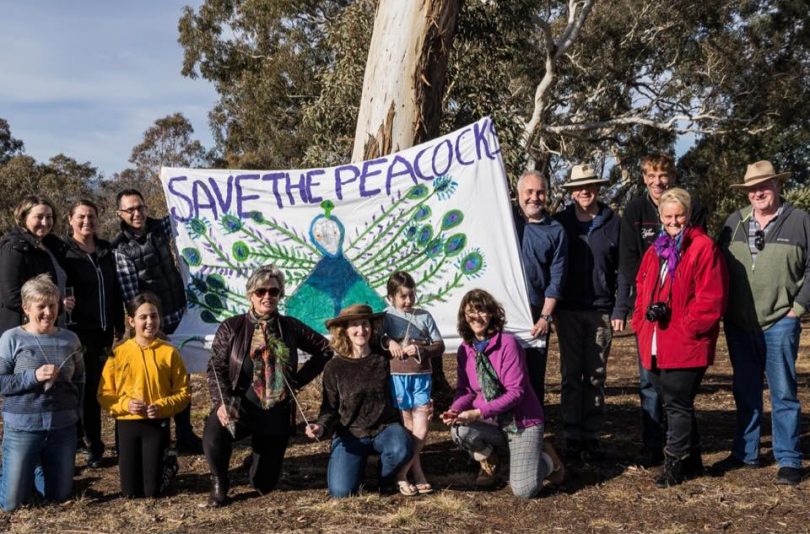 In the suburbs surrounding Narrabundah, there’s one group of birds that rule the roost: peafowl.

But as the brightly coloured birds sometimes run fowl of motorists, the local community, led by the Save the Narrabundah Peafowl group, campaigned for 18 months to have four safety signs installed in locations along La Perouse Street and Carnegie Crescent at the end of July. (Four-year-old Patrick Peascod, couldn’t wait, though, so he made his own signs.) 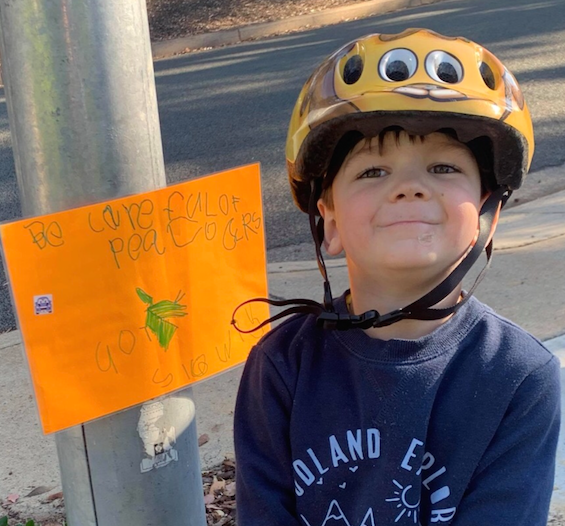 Patrick and his handmade sign for the peafowl. Photo: Supplied.

Narrabundah Peafowlers spokesperson Timothy DeWan said the Narrabundah and Griffith area is home to about 30 peafowls that have co-existed with the local community for more than 30 years.

As large, ground-based birds, most get around by slowly walking. They rarely fly, except when threatened or when accessing trees to sleep in. 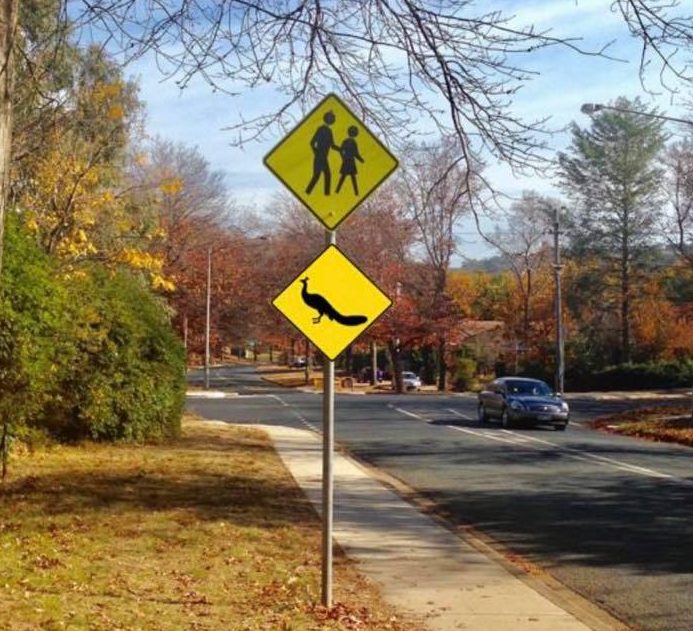 One of the peafowl warning signs at Narrabundah. Photo: Supplied.

Now the Narrabundah Peafowllers are working to further protect the birds that have adapted to their surrounds and have their own P names such as Percival, Penelope, Prudence, Portia, Pericles, Patrick, Phoebe and Percy. The exception is Andrew.

A video for Jules and John, two of our keenest fans!?

Posted by Save The Narrabundah Peafowl on Thursday, July 9, 2020

“It’s a perfect example of how we need to educate ourselves on the interaction with nature in a suburban environment,” Mr DeWan told Region Media.

“The peacocks walk around very gracefully and they tend to walk in groups. They’ve even taken to walking in single-file when crossing the road. Unfortunately, when a 30-tonne truck comes hurtling along, someone has got to slow down and when the boys [peacocks] are growing their tails, they are much slower.

“In the summer, when the chicks are about, they tend to scatter and unfortunately some get squashed.”

Mr DeWan said the Peafowllers successfully lobbied the ACT Government in 2018 to prevent a cull from occurring, and the group is fighting to have the birds delisted as a feral or invasive pest, which currently puts them in the same category as foxes.

The birds can usually be found in the section around La Perouse Street and Carnegie Crescent but have been known to traverse Red Hill for a bit of a day trip. There is also a small population at Pialligo.

“But they are very vulnerable and we lose a fair amount to dogs, foxes and larger birds who prey on the chicks. That tends to keep the population under control, so there has never been any need for a cull.

“During the summer just gone, we lost a lot of them as there just wasn’t enough water for them.”

The group is also working with the ACT Government to report on how the peafowl of Narrabundah can become a pilot for other towns where the birds co-habitate.

“We are not aware of any other city in Australia that has peafowl crossing signs,” said Mr DeWan. 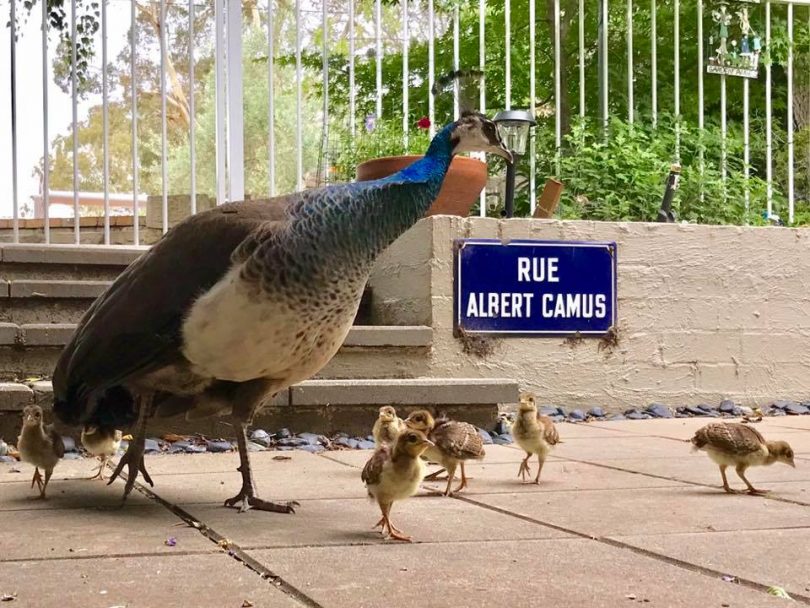 Narrabundah resident and Canberra Progressives party candidate for the upcoming ACT election Peta Swarbrick said she is angry and disappointed that the peafowl has been listed as a pest by the ACT Government.

“My experience of having these birds in my backyard and my neighbourhood has been a delight,” Ms Swarbrick said. “They have some habits, which like any birds we have to live with, but the joy and colour they bring can’t be described unless you have had the privilege of watching them in all their glory.

“Peacocks have brought me personally closer to my neighbours across the whole suburb, people I would never have had the pleasure of meeting. The designation as ‘pest’ is completely inappropriate in my opinion.”

Mr DeWan said the peafowl have become somewhat of a tourist attraction for visitors from overseas who like to avoid Canberra’s typical tourist trail and can get up-close to the birds without having to see them enclosed in a zoo. The local children also take delight in collecting the tail feathers when the males finish their mating season.

“What we’re asking from the government is to leave them alone,” Mr DeWan said. “The community is very happy to look after the peafowl and keep an eye on them. Our local vets help us by treating them at no charge. It really brings people together.

“People complain that Canberra is bland and colourless and dull. These peafowl and their interaction with us demonstrates that there are these little pockets of colour, literally, within our community and our suburbs.”

What a colossal back down by the Government from their earlier stance. Another example of squeaky wheels getting the result at the expense of everyone else. Why weren’t any of the “anti-peacockers” interviewed for this story? There are plenty of them up there and they’ll tell you it’s not all pretty birds and cute tourists avoiding the zoos. Ask them about the all night mating calls, the mounds of slippery poop threatening to break a hip at the first misstep by the aged residents and the aggressive behaviour by protective parent birds.

But they are feral…..how can you relist that to make otherwise? Maybe change the dictionary meaning of the word?

Annie Thomas i see them all the time whilst running. We should give them names

Annie Thomas why is it peafowl 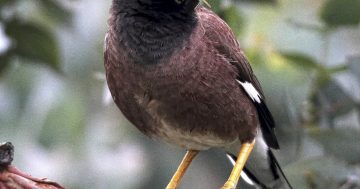