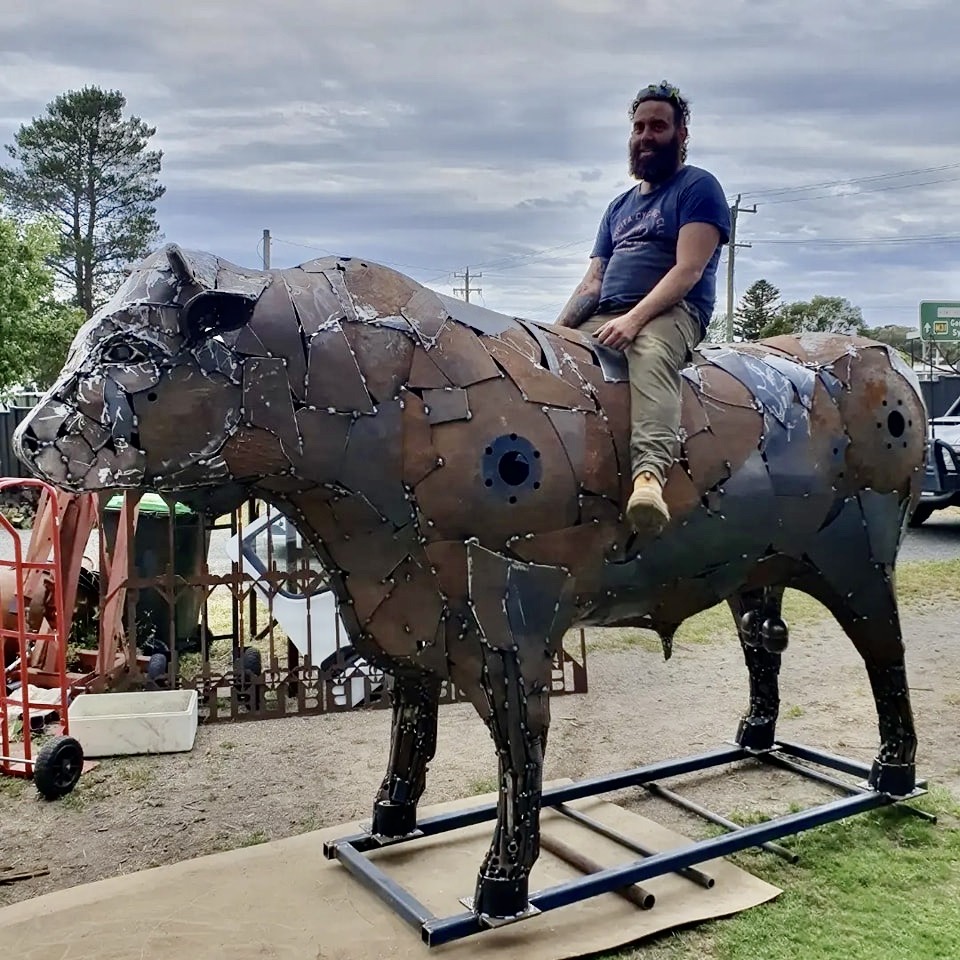 In the early days of taking his work to markets, Shannon Hobbs (on the bull) sat a sign on them: “Out of respect for the artist, please take as many photos as you like.” Photo: Supplied.

Metal sculptor Shannon Hobbs is living his dream – except for those negative demons.

He has enough commissions to last him well into next year. He has just returned from a 2200-kilometre round trip to South Australia delivering his latest full-sized Wagyu beef bull made of metal. Now he is mapping out a large smoker for a client in Tasmania.

But every commission triggers a battle in his head.

“There is a little head-scratching and I am sure as with lots of artists, all the negative demons in the head go, ‘Nah, that looks terrible, you are not going to do this’,” Shannon said. “That goes on up to the stage where it [his sculpture] looks really good.”

Establishing his home enterprise, HOONart77 metal sculptures, at Marulan in 2013, he has captured the imagination of cattle producers, transport companies, his fellow barbecue fanatics and dog owners who have commissioned his work.

Ten years ago he was a tyre fitter who began tagging along with his younger cousin, acclaimed sculptor Tobias Bennett, to markets selling small examples of his emerging metalwork.

As his work became bigger and better, word-of-mouth spread. Gradually, he progressed to special commissions worth $25,000. He says the real hero in his story is his wife Samantha for being game enough to agree with him quitting his ”real job”.

“As all artists know, it’s a bumpy income track, so I do appreciate her support to get this far, because we are pretty lucky now and I got to spend all this time with my kids when they were little,” he said. “I’m really grateful for that, too.” His daughter is nine and his son is 12.

“I’m a full-time artist, a full-time, stay-at-home ‘nanny’,” he said. “I am very aware of how fortunate I am, because I know a lot of people who have tried and they still have to do their day job. I am to a point where I think I am almost unemployable because I have become used to my own schedule.” 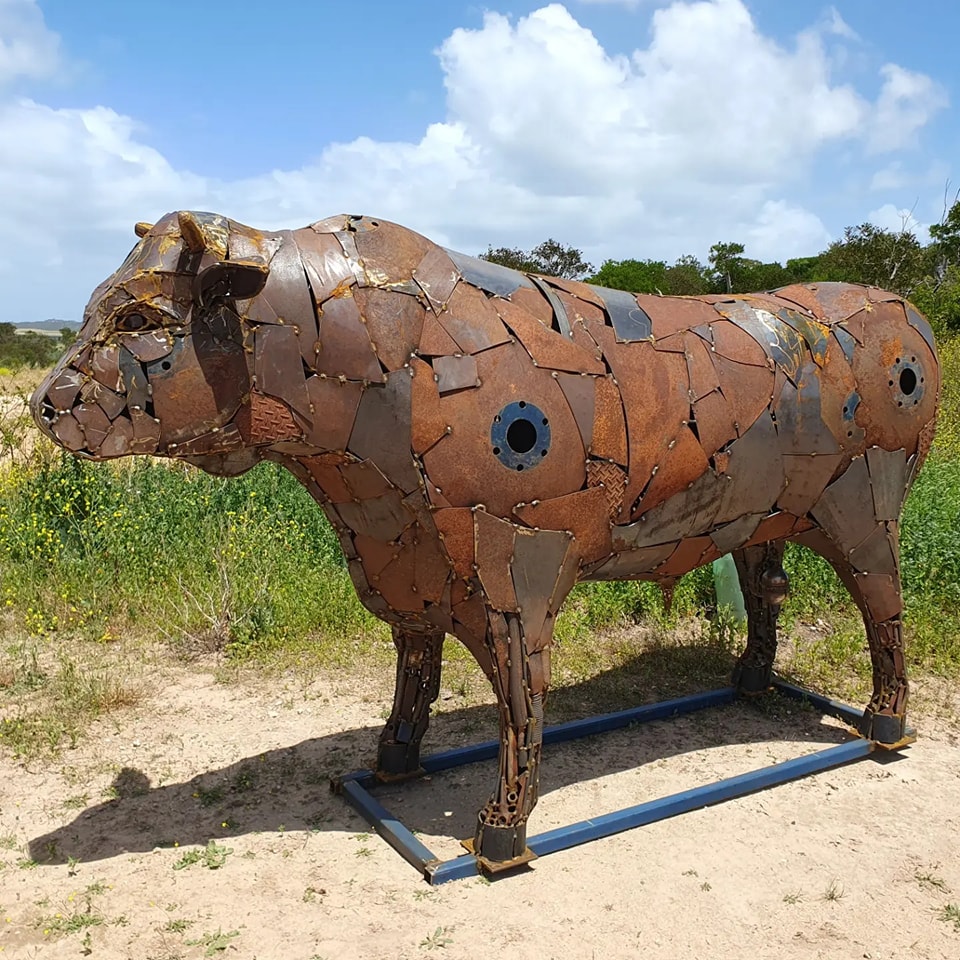 Shannon Hobbs says his wife Samantha became a ”single mother” during the months it took him to create this Wagyu bull. Photo: Shannon Hobbs.

A big fan of American low-and-slow barbecuing, he dreamed of building something like the smoker he saw on a Netflix show about that style of cooking.

Then one day a thought struck him when he saw Yvonne Hughes, who owns Marulan Meats.

“Hey, let me know if you need a smoker,” he said. This led to a commission creating a large smoker that became the prototype for many more. Working with a welder, grinder and plasma cutter to cut steel, he used an air tank originally designed for an imported air compressor.

“You read about people who say they scratched their own itch and it made them money, and I am pretty happy how this has worked out,” Shannon said.

“There are lots of people making smokers in Australia but my customers want my artistic flair to make theirs a little bit different. I am making one at the moment; it has to be in a shipping container at Port Melbourne on 19 January because it’s going to Tasmania.”

Word-of-mouth recommendations are running as hot as the smokers.

“The last big one I made was for a cattle producer for his annual sale day,” Shannon said.

He has sculpted lyrebirds, B-double truck letterboxes, birds of prey and many other works of art.

He says the key to his success is the quality of his work.

“It does the talking for me,” he said.

South Australian Wagyu beef producer Mayura Station, which exports throughout South-East Asia, commissioned Shannon for a full-sized replica of one of its bulls. So happy with the outcome was the elite breeder, they returned later, requesting another for their foundation sire, Itoshigenami JNR. Shannon spent at least three months to complete the replica bull, although he was in his shed for so long he lost track of time. 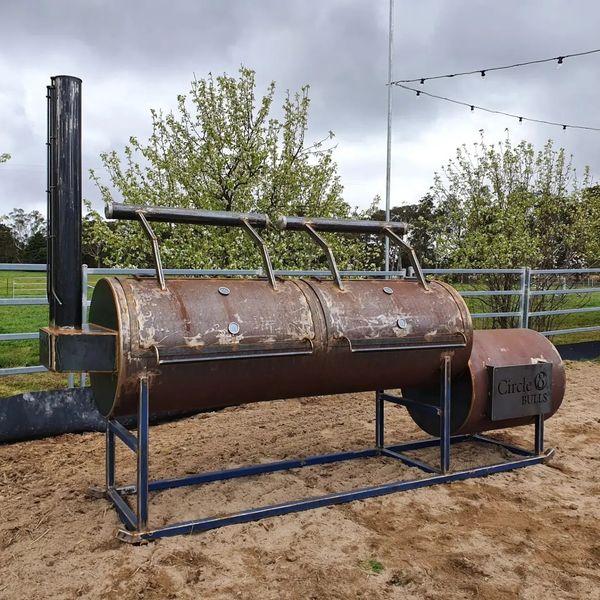 One of HOONart77’s smokers for a cattle producer. Photo: Shannon Hobbs.

Guided by a photo and overhead projector, he makes a basic outline using a 12mm round bar. He creates the body section first to get the scale right. If it looks wrong, he will cut the offending piece off and start again. He and mentor Tobias Bennett call this the jellybean technique.

Shannon likes working with metal because he can discard mistakes and start again.

“It’s pretty satisfying,” he said. “Sometimes it’s a bit of a struggle, but it wouldn’t be good if it were easy.”

Shannon, great pieces of work. Wish I had that talent. Then I could make a fire breathing dragon bbq modelled on my wife…..arghhhh I am doomed.