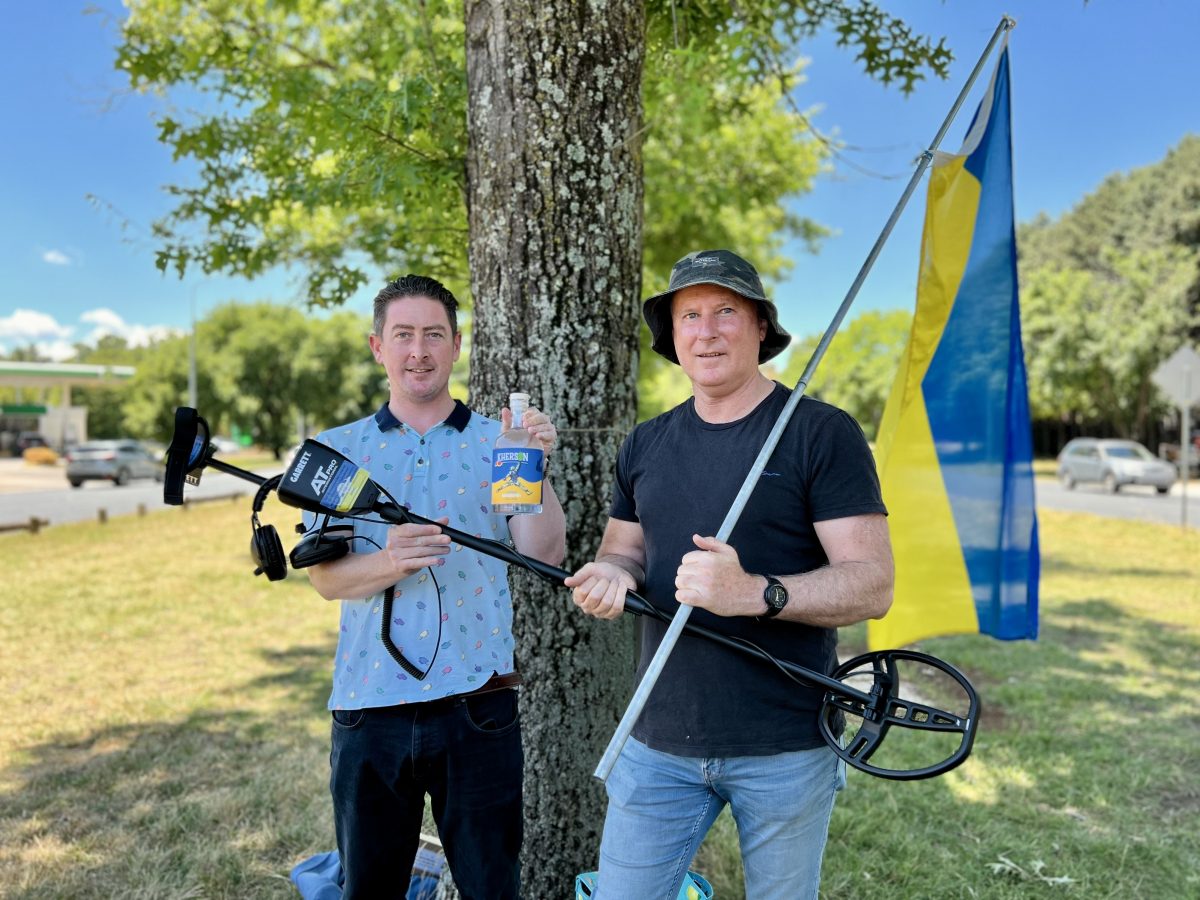 It’s been going on for more than 10 months now. When Russia launched a full-scale invasion of neighbouring Ukraine on 24 February 2022, people on the other side of the world starting protesting it. In Canberra, opposite the Russian embassy on Canberra Avenue, they’ve been at it every day of the week – bar Sunday – ever since.

The “Stand with Ukraine – Canberra” group might be marked by the usual protest ingredients – flags, placards and megaphones – but there’s a lot going on behind the scenes. For instance, the group has just sent two bottles of gin to the Ukrainian president as a symbol of Canberra’s fundraising efforts to help the people fighting for their homeland.

The custom label reads: “Presented with the love of Australia, to Volodymyr Zelenskyy”.

Nathan Burraston is one of the brains behind the initiative, and says it all started when he heard how many civilians were being maimed and killed by Russian-laid landmines, many along evacuation routes.

At his request, metal detector company Garrett Australia agreed to supply hundreds of them, with a humanitarian discount, so Nathan turned to the Federal and ACT governments for interest in funding it.

“We unfortunately got no response from either, so we thought, ‘we’ll just have to do this ourselves’.”

The group has since raised more than $95,000 on Australian crowd-funding website Chuffed – mostly from Canberrans’ donations – and sent 60 metal detectors to Ukraine, with another 30 set to go. 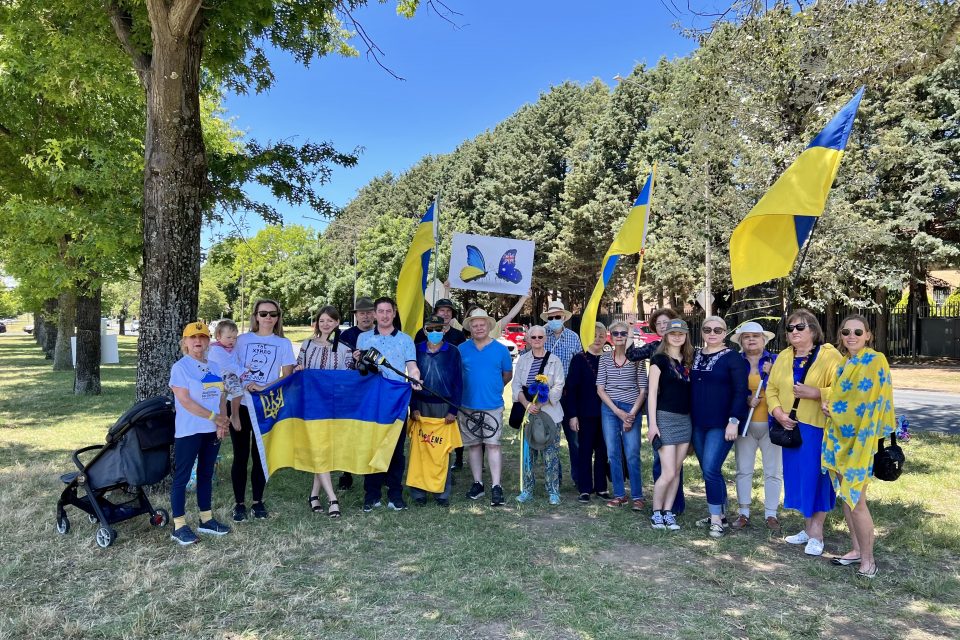 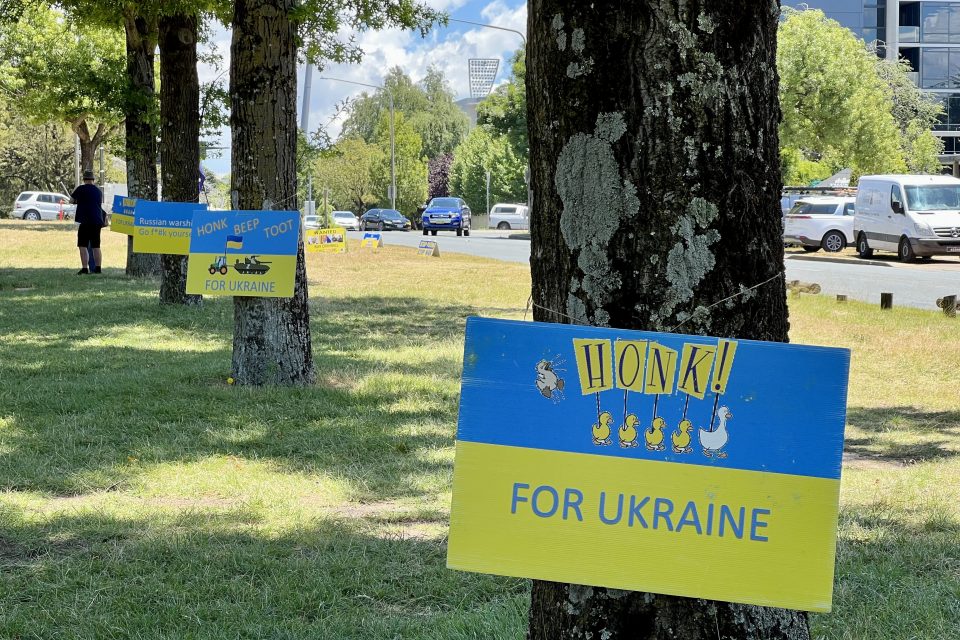 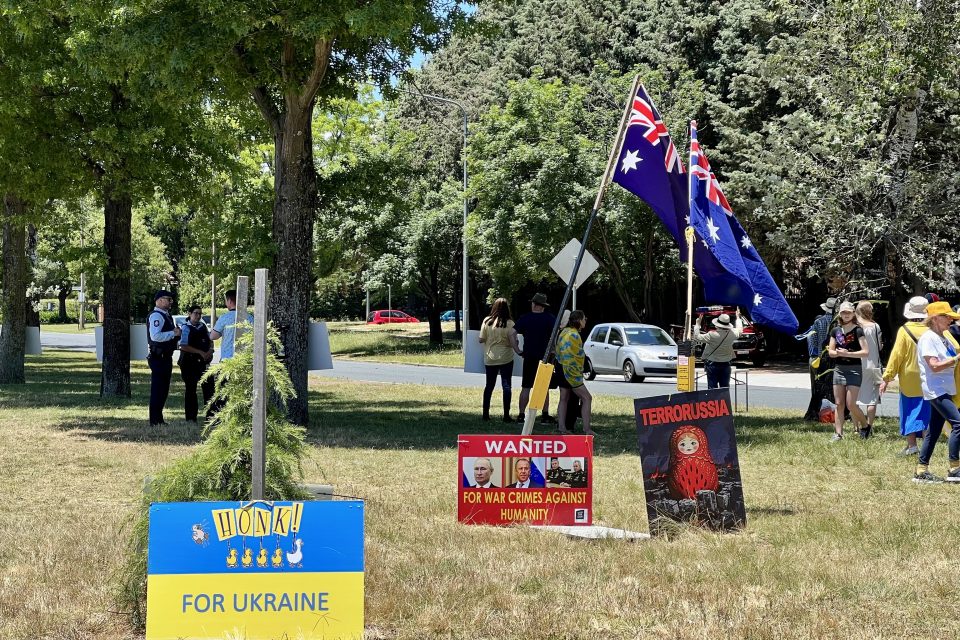 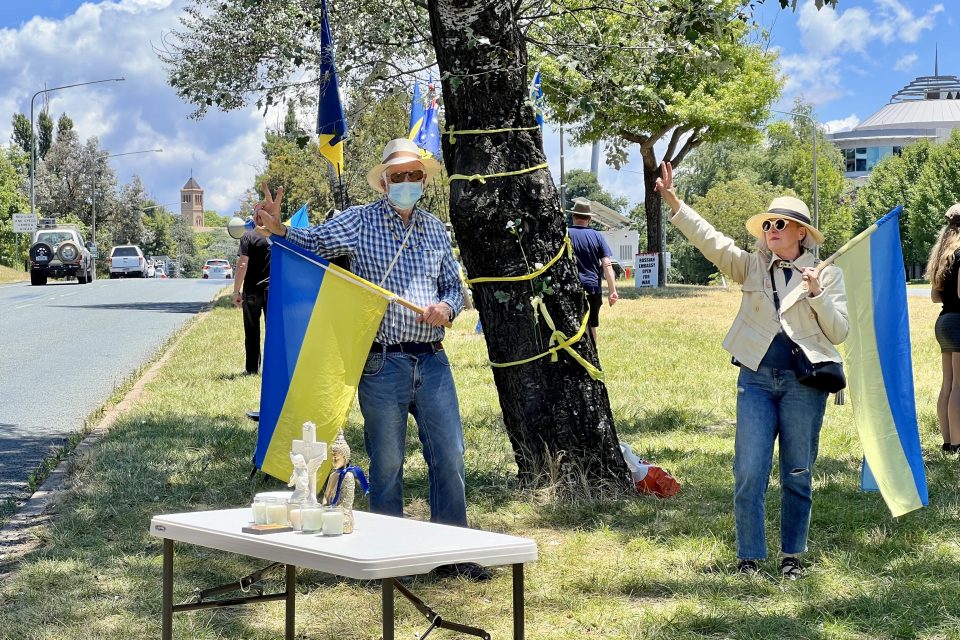 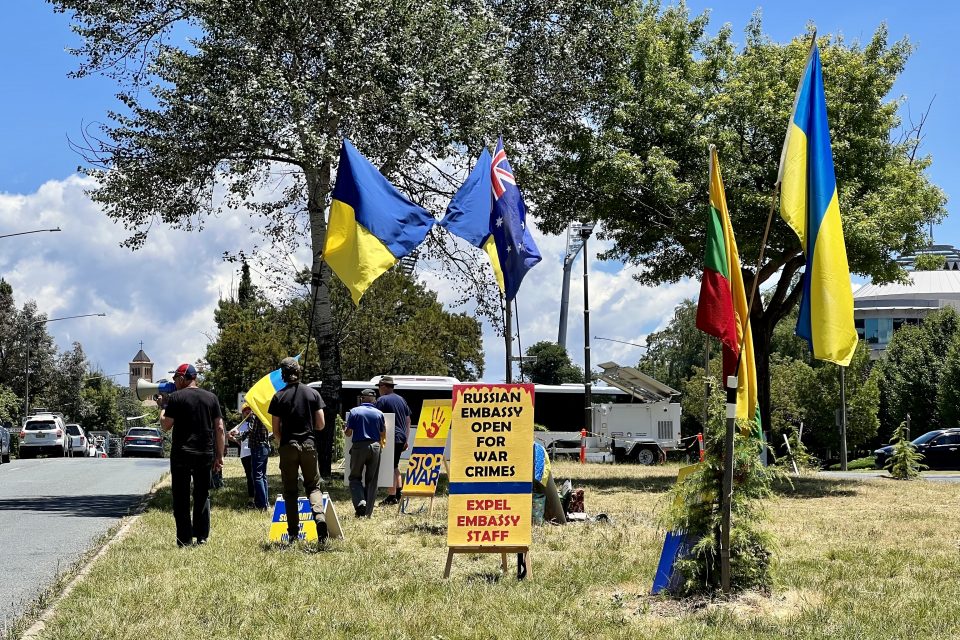 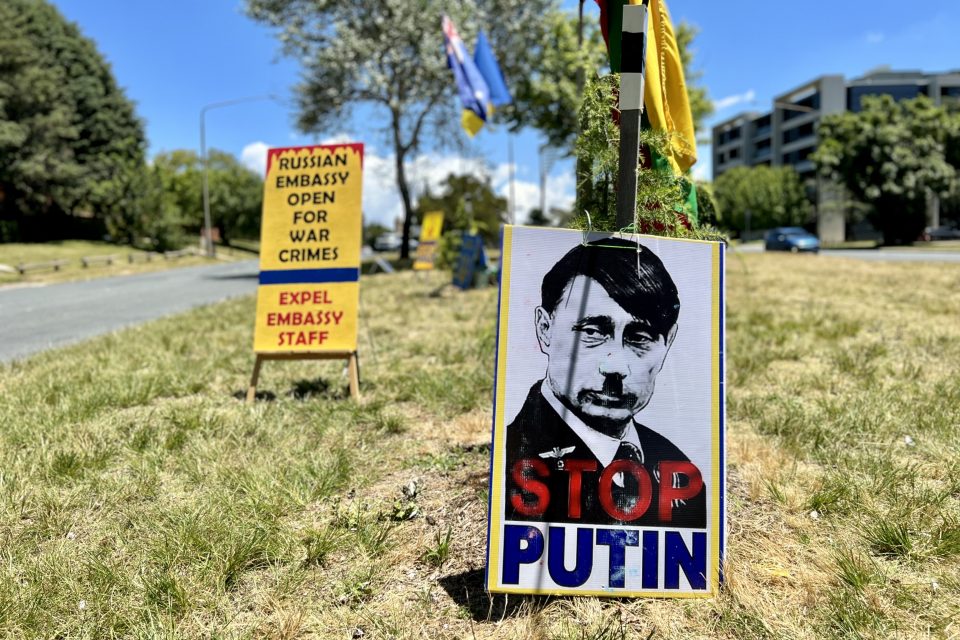 To accelerate the funding, the group also collaborated with a distillery in Queensland, Sunshine and Sons, to create their own ‘Kherson liberation gin‘. It’s so named because – at the time all this was happening – the Ukrainian city of Kherson was liberated from eight months of Russian occupation.

“The label, with its ‘jumpman’ artwork, was created by an artist based in Ukraine, but because there were frequent power and communication blackouts, it had to be finished off in Australia.”

Nathan is not Ukrainian, nor does he have family or friends over there. He was inspired to join the Canberra protest by a former work colleague of Ukrainian descent.

“I’ve never protested anything in my life, but I felt compelled to join when I saw the atrocities and obvious war crimes on the news,” he said.

Similarly, the Kingston Hotel – on the other side of Canberra Avenue – has joined in. The owners have run up the Ukrainian flag from a new flagpole and opened up a room inside for storage of the group’s placards and banners.

For others, the connection to Ukraine is blood-deep.

Marusya Jacyshyn was among the initial protesters to gather outside the Department of Foreign Affairs and Trade in Barton the day after news of the invasion broke and outside the Russian embassy the following weekend. 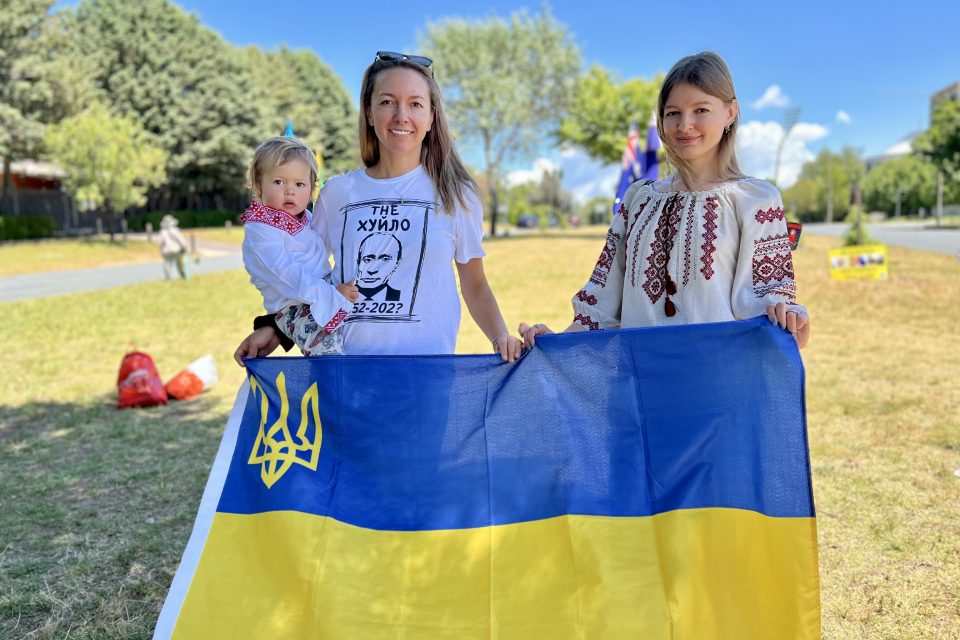 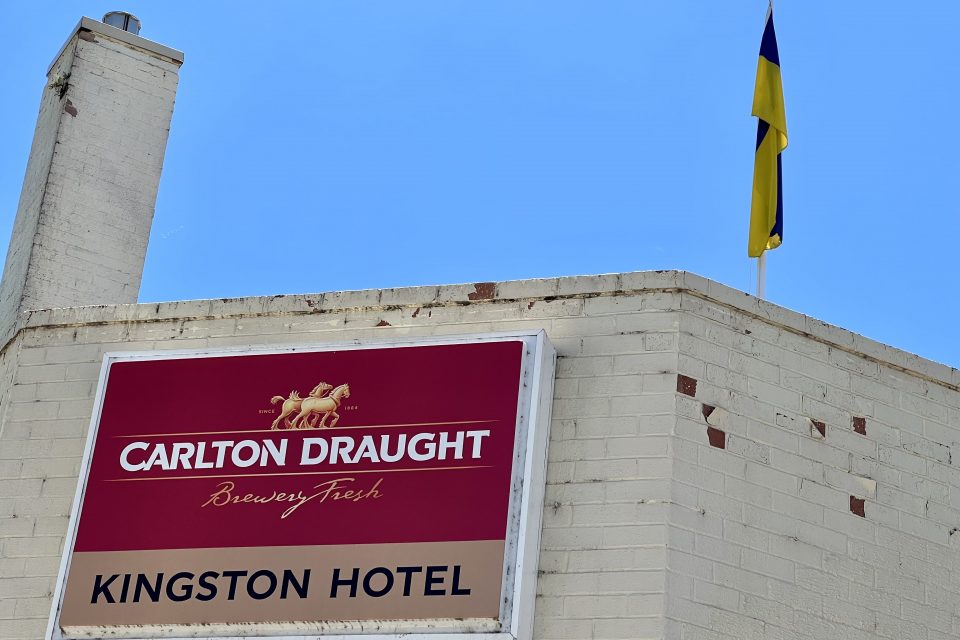 Ukraine flag flying at the 'Kingo'. 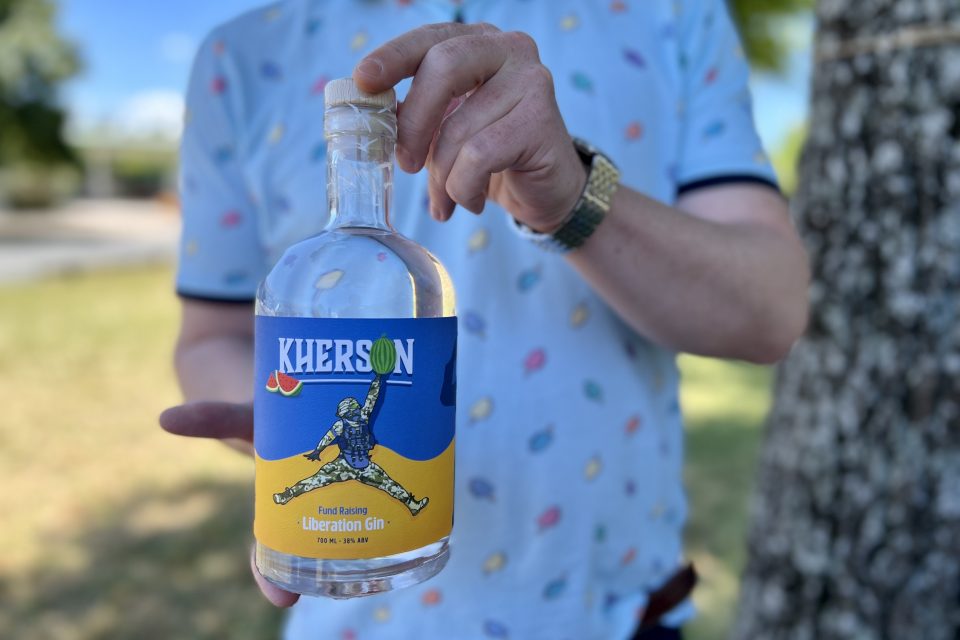 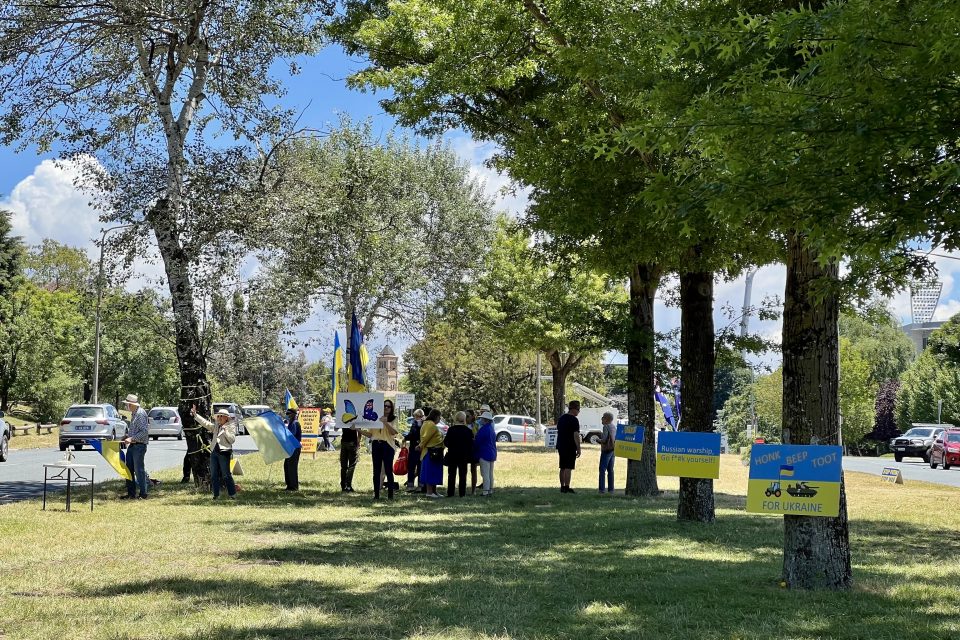 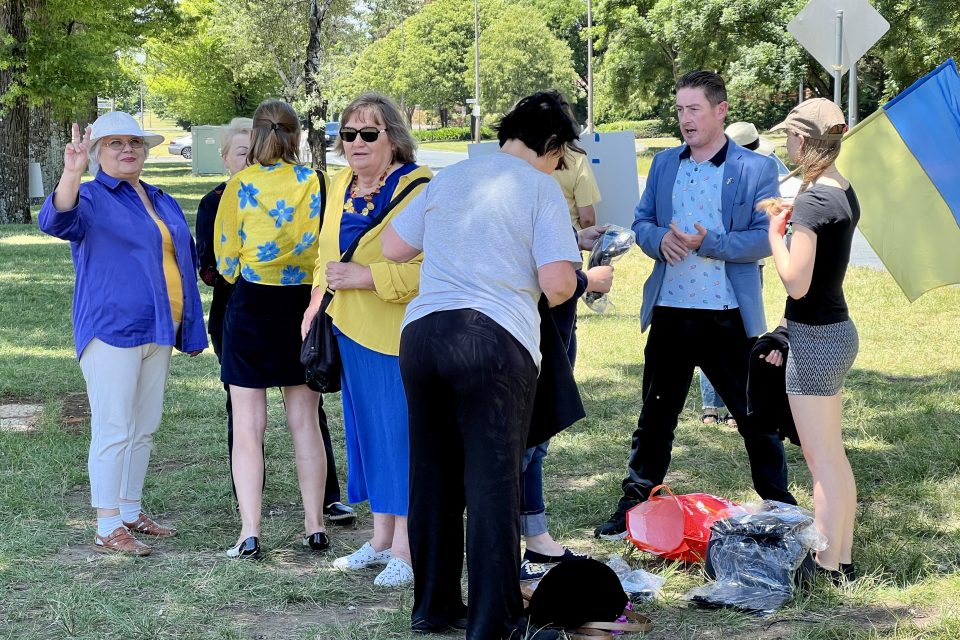 “I have family in Ukraine, some in the armed forces,” she says.

“Even in western Ukraine, the people are traumatised. There’s often no electricity or water, and they can just be standing on their balcony when missiles are flying overhead.”

Marusya’s hoping the continuous protest will gnaw away at the local embassy to the point where talk of it reaches Russian president Vladimir Putin and his government. Already, reports are coming through of Ukrainians encouraged by the show of solidarity in Canberra.

Olga D’Ambrosio, together with her husband and son, has called Canberra home for nearly seven years. Her dad and brother remain in Kiev, and while she’s able to stay in touch with them “it’s hard because of Russian attacks on infrastructure nearly every week”.

“They can lose power and communication lines for days, so I can’t even find out if they are okay,” she said. “It’s very scary.”

Olga tries to go to the protest as often as she can as one of only a handful of things she feels she can do to help.

“I try to help as much as I can, sending them rechargeable lights and power banks and warm clothes and oodies to keep them warm during the cold winter.”

But Marusya says the call is for Canberrans to continue to honk and help as they’re able, particularly as the group gears up for the next big fundraising initiative – portable beds for the Ukrainian troops.

“People have been very generous,” she said.