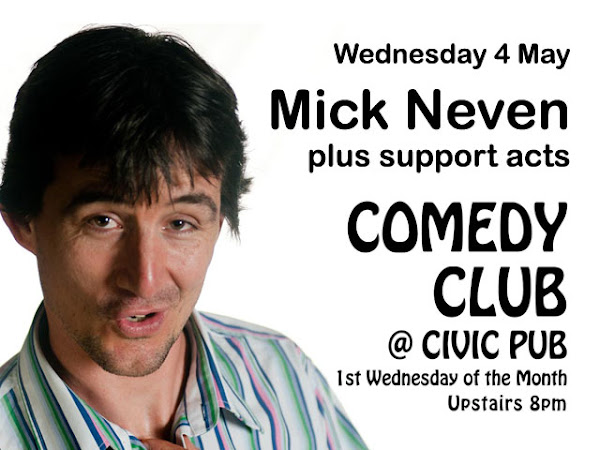 Melbourner Mick Neven has been a regular performer at Stand Up Comedy venues around the country for the last 7 years. In that time he’s opened for Meatloaf, auditioned for Puppetry of the Penis and worked in a Cheese Factory, truly experiencing life’s highs and lows. From sharp observations to engaging anecdotes about life so far, Mick’s comedy is witty, engaging and accessible to all.

Hosted by Paddy Hornby with sets from Kale Bogdanovs and Greg Kimball fresh back in town after a month of sell-out shows as part of Capital Punishment at the Melbourne International Comedy Festival, as well as newcomer Paul Sweeney.

For more details or to book tickets visit:
http://comedyact.com.au/comedy-club-at-civic-pub-040511

Jordan Amber - 51 minutes ago
Anthony Gordo the club has to diversify away from gambling based revenue business models and as part of the ACT Government re... View
Peter Morales - 4 hours ago
David Malcolm WTF should they View
Peter Morales - 4 hours ago
The kid's ain't got a chance to voice themselves against a drug and gambling organisation especially when their backed by loc... View
Community 3

@The_RiotACT @The_RiotACT
International students will not be returning to Canberra's major universities until mid-2022, but ANU and @UniCanberra are urging the government to allow them back on campus sooner https://t.co/XSLnGSiakN (46 minutes ago)