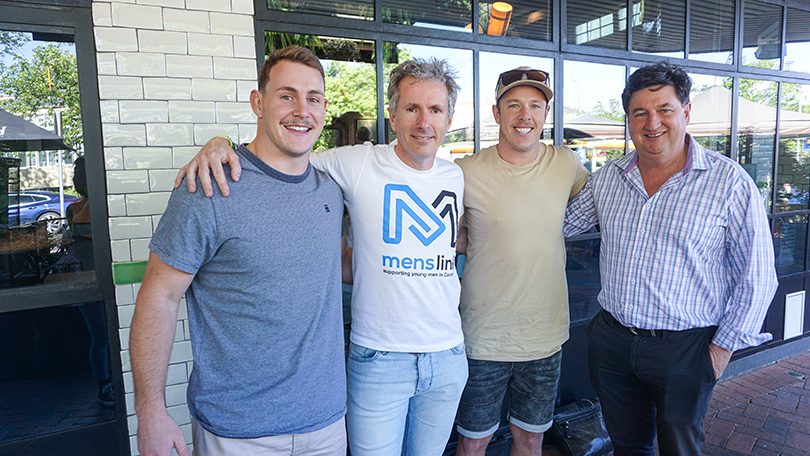 Contacts to crisis support services soared during September 2020, jumping by between 14 to 21 per cent compared to the same time in 2019, as young people continue to bear the brunt of COVID-19 related distress.

Mental health services, such as Canberra-based Menslink, are now calling out for help ahead of what is expected to be a busy new year.

Fewer than one-third of people who committed suicide between the ages of 10 and 24 were receiving mental health care at the time of their deaths, revealed research in The Medical Journal of Australia.

Improving the ability of community members, including other young people, to detect and respond to people at risk of self-harm is critical, said the report.

This is where Menslink mentors come in.

“This year more than ever, our young fellas have needed both community and connection, which they lost during lockdown,” said Menslink CEO Martin Fisk. “Young guys felt isolated at home.

“What we’ve found is that mentoring provides the young guy with confidence. Knowing someone who’s not his parent and who’s not an authority figure actually has his back.

“Someone he can turn to and ask for support and advice on how to deal with a tough situation he’s never faced before.”

READ ALSO: Now is the time to turn to young people, says ACT Young Australian of the Year

Throughout the COVID-19 pandemic, Menslink mentors continued to meet with young men where they could – such as socially distanced walks – to help maintain that connection through the isolation.

But unfortunately, the organisation is now struggling to recruit more mentors despite increasing demand – both due to the pandemic.

There are now triple the number of young Canberra men who are looking for mentors than men putting up their hands to help, said Mr Fisk.

“This year, we have found it harder to get good mentors into the program,” he said.

“With so much going on in their lives and continued uncertainty around finances and family, they’ve said, ‘Maybe another time.’

“After having so many cancelled events this year, we welcomed more than a hundred young fellas, mentors, mums and families to our Christmas barbecue at the Cotter River, our biggest mentoring event ever – [it] showed just how important connection and community really are, especially in tough times.”

Mentoring with Menslink entails a commitment of one-to-two hours a week and you do not need any special skills as a prerequisite because full training is provided.

“If you’re a man wanting to give back to the next generation, and want to join an awesome community of likeminded blokes, get in touch with Menslink,” said Mr Fisk.

“You could just change a life for the better – your own included.”

For more information about becoming a mentor, or to sign up, please visit Menslink.

Steve Carter your name all over this!

Brian maybe this is something we could both help with? 🥰

nobody - 30 minutes ago
AEMO shows over the past 12 months 23% of electricity came from renewables (solar 4%, wind 11%, hydro 8%), and 77% came from... View
chewy14 - 1 hour ago
Nobody, Except no one is saying that wind and solar are the only renewable technologies available.... View
Capital Retro - 1 hour ago
In the meantime I will be storing petrol for the cost of it and the container only so when the lights go out I won't have an... View
Lifestyle 13

John Moulis - 7 hours ago
They look a bit like mushrooms. It could be symbolic in that veterans were treated like mushrooms when the issue of agent ora... View
show more show less
*Results are based on activity within last 7 days