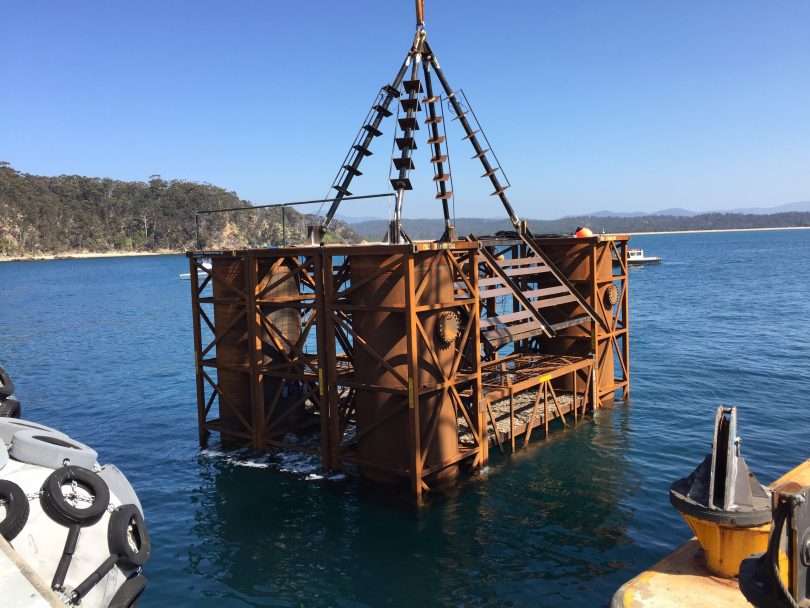 The South Coast’s first offshore artificial reef has been plonked in the waters of Merimbula Bay with the aim of attracting life and improving fishing opportunities ahead of the summer holidays.

The $1.1 million project has been funded from the NSW Recreational Fishing Trust, following advocacy from the Merimbula Big Game & Lakes Angling Club.

The reef is located 2.5km southeast of the Merimbula estuary entrance in approximately 32 metres of water.

Member for Bega, Andrew Constance says the reef is a huge win for our local community and will provide a significant boost to local tourism.

“I have worked closely with our recreational fishing community to see this reef delivered and I can’t wait to get out on the boat and cast a line with them,” Mr Constance says.

“With this reef and another still to come in the Eurobodalla we are ensuring that the South Coast is a premier fishing destination.” 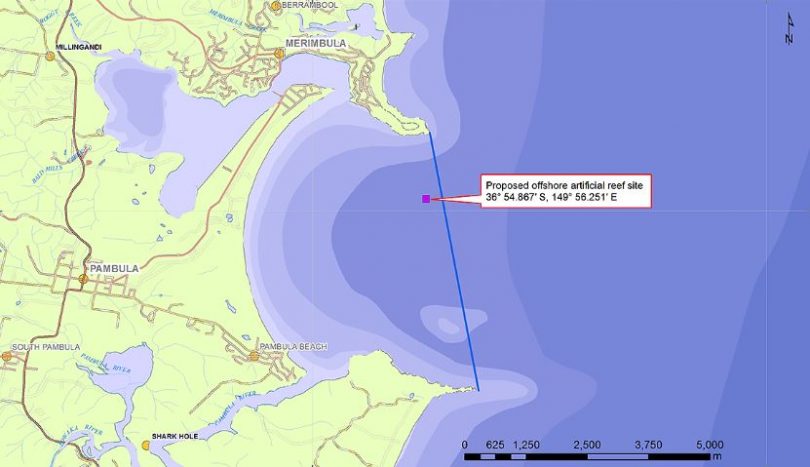 The artificial reef consists of two very large ‘pinnacle’ style reef units that have been specially designed for the Merimbula region.

Each unit weighs up to 90 tonnes and stands 12 metres high and are designed to withstand very large coastal storms while providing excellent habitat for a wide range of fish species common to the region – Kingfish, Snapper, Morwong, Trevally, Nannygai, Leatherjackets, and Salmon.

Moving the structure into place happened over Tuesday and Wednesday, the large cylinders built into the modules were partially filled with air to allow the 90 tonne structures to be ‘floated’ and towed to the site where they have each been individually ‘sunk’ on to their final position on the seafloor. 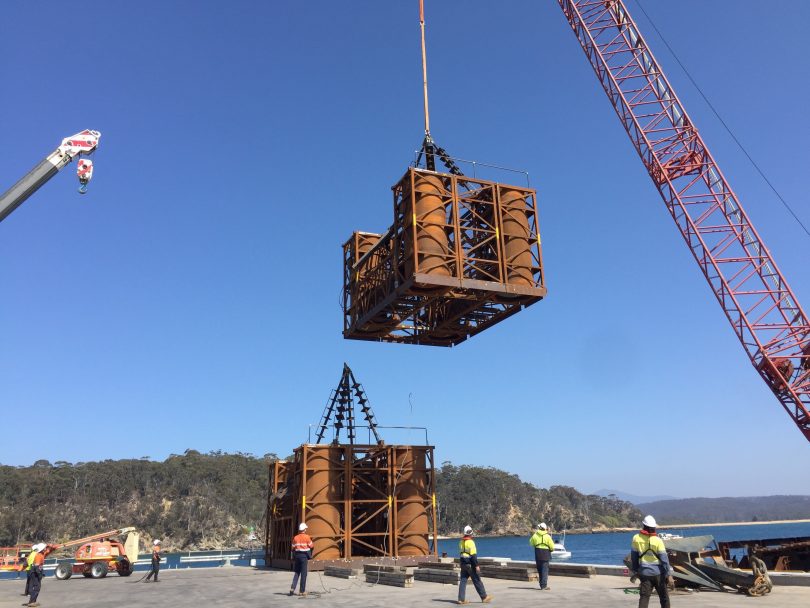 Construction took place in Eden before the structures were towed north to Merimbula. Photo: Supplied.

“The assembly of the artificial reef ‘towers’ was undertaken locally in Eden bringing more dollars back into the region,” Mr Constance says

“Artificial reefs have been extremely effective in creating productive fish habitats that attract a diverse range of species and we expect fish will rapidly develop on the new reef.”

The new offshore reef compliments a similar structure that was placed into the shallower waters of Lake Merimbula in 2009.

Feedback - 11 minutes ago
The article mentions that 'The path out will resemble last year’s easing but will include working from home for some time t... View
whatwik - 1 hour ago
With the school holidays upon us, spare a thought for children and parents (and grandparents!) in Cowra, which was among area... View
Opinion 49

Tom Worthington - 12 minutes ago
Not "Man the torpedoes", it will be: "Activate the AI in the Uninhabited Underwater Vehicles". ;-) More seriously, Australia... View
chewy14 - 12 minutes ago
JC, I've repeatedly said this isn't mainly about the hardware although it helps. And why can't we strengthen our non military... View
chewy14 - 16 minutes ago
Won't be fooled, I said it helps to protect Australia. But only partly through the hardware, the bigger benefits come from th... View
News 2

Tom Worthington - 22 minutes ago
Fond memories of the old Gowrie Hostel, where I was put up as a new public servant in the early 1980s. We all congregated to... View
Property 22