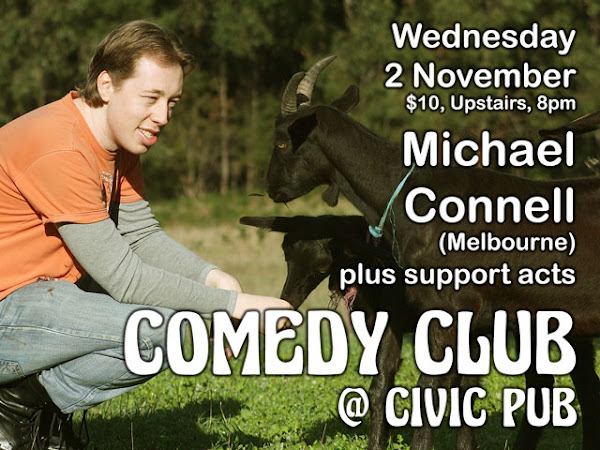 Michael Connell began getting laughs at the age of three in his back yard with the Hills Hoist acting as stage and curtain, and he hasn’t stopped performing since.

Over the years Michael has had great success within the Comedy Industry. He has performed several shows in the Melbourne International Comedy Festival. He has performed to capacity crowds at both the Melbourne Town Hall and Her Majesty’s Theatre, during a half time show at Telstra Dome, appeared on television and radio and regularly gigs at some of the best comedy clubs around Australia.

Michael has performed in the NZ Comedy Festival in Auckland and toured the North Island of New Zealand. He regularly travels to perform in various places around Australia and has performed in Hobart, Canberra, Brisbane, Sydney, and all over Victoria from Warnambool and Elmore to Geelong and Bendigo.

Thanks to his all-encompassing and non-offensive style of comedy, Michael is regularly in demand. Community organisations, high schools, companies, and other groups who want to have a comedian at their event, but don’t want to risk offending anyone, turn to Michael.

Michael will be supported by local comedians Jay Sullivan, Shiralee Hood, Justin Newbury and the night will be hosted by Paddy Hornby.

Chris Kubank - 17 hours ago
Lauren Ogden well said View
Randy Goldberg - 23 hours ago
Domenic Fabbo three to six months or more. Basically, it'll be in place (if not stronger measures) until there is a working v... View
Lauren Ogden - 1 day ago
It is a shame that these stories are provoking aggressive reactions when we could be working together as a community. "One st... View
News 18