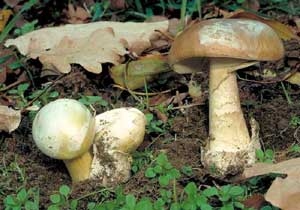 The National Capital Authority has been moved to warn of the horrible menace of Death Cap mushrooms which have made themselves at home in these parts:

‘While the death cap is a large mushroom, with a cap ranging from light olive green to greenish yellow, the immature button can be difficult to distinguish from an edible mushroom.’

The death cap is one of the world’s deadliest fungi. All parts of this mushroom are poisonous, and eating just one mushroom can be fatal.

The death cap mushroom is commonly found near established oak tree plantings of which there are many in central Canberra and the older inner suburbs.

(Image courtesy of the Botanic Garden’s excellent information page on the deathcap.)

I used to eat mushrooms from the paddock, until I was chopping them up once and found… ugh… worms in them. Never again.

I went to this totally hilarious talk once by an older German academic (chemistry). Wild mushroom gathering was apparently a major activity in the area where he lived in Germany. He had some theories about some of the chemicals found in mushrooms, and how the mushrooms made them. So to test it, he produced radiolabelled (ie slightly radioactive) compounds and injected them into mushrooms to see if the mushrooms then converted the chemicals into something else. The hilarity came in when he revealed that the mushrooms he was injecting were just out in the forest – he just wandered out, injected and came back the next day to get the mushrooms…. woe betide anyone in the meantime who went into the area looking for a mushroom dinner

Chemistry was a lot more fun before OH&S. But I suspect more people may have died.

I knew a guy who was attacked by a number of death caps late one night.

He escaped, barely, with his life. Others are not so lucky.

Let this be a lesson to you all…

Mushrooming is quite a hobby among some people, who do know their stuff. A friend’s Finnish mother used to make teh most glorious pancakes, stuffed with those orange fungi that grow in pine forests. I can still taste that (drooling now).

I remember reading that deathcaps can look like proper mushrooms. I have some toadstool things on my lawn right now, actually, with white gills, and wondered if they were evil or not. No oaks for several hundred metres either.

I wonder why they called them that?

Anyone stupid enough to go pick a mushroom growing under a tree deserves what they get IMO.

How about these ones:
These ones won’t kill you, but you really shouldn’t eat them more than once or twice per year, as the strychnine they contain will build up in your body and takes a while to be eliminated.

The above information is incorrect. There is no strychnine in mushrooms (or lsd for that matter).

You’d really have to be a moron to mistake a Deathcap for an edible mushroom.

NCA is making an announcement for all Canberra morons, except you of course, who might mistake the immature buttons for an edible one.

How about these ones:
http://www.erowid.org/plants/show_image.php?i=mushrooms/images/archive/panaeolus_cyanescens2.jpg

These ones won’t kill you, but you really shouldn’t eat them more than once or twice per year, as the strychnine they contain will build up in your body and takes a while to be eliminated.

Well, the other types that can easily be found in Canberra look much different…

Maybe you should post a picture for comparison purposes, to avoid any mistakes? 🙂

“The only people I can think of who would consume any mushroom from the wild are those that are eager for a trip… to the hospital.”
– Indeed – if it’s not got oodles of plastic packaging wrapped around it, it’s not real food, is it?

When I was a kid, after rainy days we used to pick bags of mushrooms in the vacant land between Red Hill and Hindmarsh Drive.

You’d really have to be a moron to mistake a Deathcap for an edible mushroom.

Well, the other types that can easily be found in Canberra look much different… my high school English teacher taught us/me that.

The only people I can think of who would consume any mushroom from the wild are those that are eager for a trip… to the hospital.

Other page with a comparison: “Do not eat the Deathcap”

More famous people than you who have been killed by deathcaps include: Roman Emperor Claudius, Charles VI (Holy Roman Emperor), and (possibly) Pope Clement VII.

*gets a bit tired of people asking the same questions*

Ashley Wright - 15 minutes ago
Jennie Smith vast majority of the tram works were done in the median strip of flemmington road with minimal impact. There was... View
Property 3

Robert Hawes - 1 hour ago
Should be done via the nurse walk-in centres. View
Lyn Christie - 7 hours ago
Ian E Wheeler maybe somewhere you can register if you don't see community nurse and are unable to get out to receive the shot... View
Tom Porter - 9 hours ago
Maybe the carer can arrange for the community nurse. It is not prohibitive. Then again the government could contract Aspen to... View
News 20

JC - 2 hours ago
Actually think you will find this “outcome” actually backs up my comments. Do you think both parties came to a $400,000 a... View
chewy14 - 2 hours ago
JC, The other week you were claiming the silence was due to pending litigation which now as we see (and I said) was false. Th... View
JC - 3 hours ago
Life doesn’t work like that. It’s quite clear that for the last year they have been in dispute with the builder over this... View
Community 20

Andrew Dale - 6 hours ago
Rory Bourke I'm both mate 🥸🥴 View
Lucas Anasdow - 9 hours ago
The Left are pushing to have the Event Renamed as the Term 'Black' is deemed to offensive and upsetting for segments of the C... View
Rory Bourke - 9 hours ago
These days they don’t call it old, they call it experienced. View
News 3