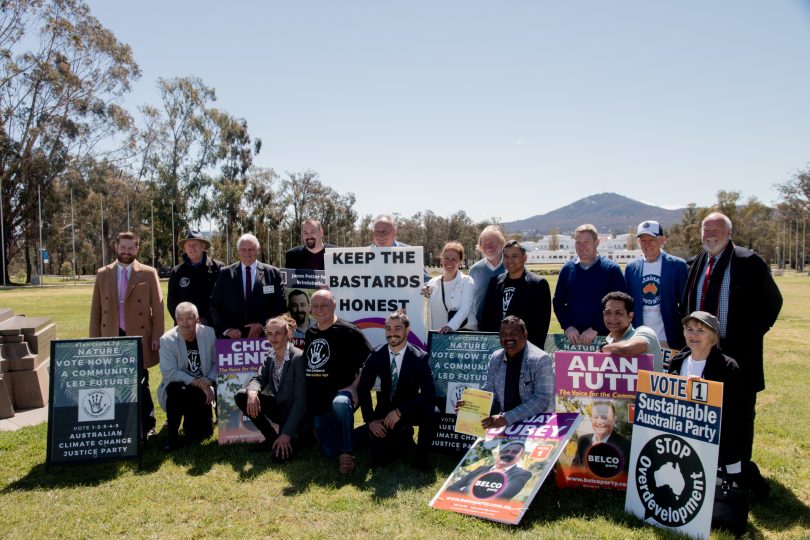 Minor parties in the ACT have banded together to promise free solar panels and batteries for all Canberrans. Photo: Dominic Giannini.

A group of four minor parties and three independents have banded together to promise every house, apartment and commercial building in Canberra $10,000 worth of solar panels, storage batteries and electric vehicle charging stations.

Electric car registrations will be cut in half and hybrid vehicle registration will also be reduced by 25 per cent under the four-year policy which, in total, is estimated to cost $500 million annually.

The Belco Party, The Climate Change Justice Party, Sustainable Australia, The Federation Party, and independents Fuxin Lee, Mignonne Cullen and Helen Cross have all agreed to force a coalition partner to adopt the deal.

Funding would come from the current budget, which is estimated to be around $25 billion over the next four years, Climate Change Justice Party convenor and Kurrajong candidate Petar Johnson said.

“The government is for the people,” he said. “The model of user pays in government does not work.

“The idea of the government taking all your money and doing what they want and delivering very little services is a major point of contention in the ACT. Canberrans are absolutely gutted with the cost of their rates and the cost of living in Canberra.”

However, the policy is almost certainly dead on arrival with the entire scheme resting on minor parties holding the balance of power in the Assembly – something that has not happened since the first Stanhope Government.

Bar the Greens, minor parties have not held the balance of power since the 2004 election, in part because of the nature of Hare-Clark, although some minor candidates are predicting they have an 80 per cent chance of being elected this year.

Despite multi-candidate electorates, quotas mean that two seats each go to Labor and the Liberals, with one “swing seat” being available in each of the five electorates.

Shane Rattenbury’s strong standing in Kurrajong and the Liberals’ foothold in Brindabella means only three seats are likely to change hands – the Belconnen-based Ginninderra, the Gungahlin-based Yerrabi, and Molonglo Valley-based Murrumbidgee.

But parties like the populist Belco Party are trying to provide alternatives to voters tired of two decades of Labor Government, but seeing no viable alternative with the Liberals.

In a year where everything else has been shaken up, could the Legislative Assembly be next?

They should regulate that every new commercial or residential premises is to have a 6kW system, batteries, water tanks etc… put it back onto the developers to fund it.

Lots of Magic Pudding economic thinking at work there, but putting the dollars and cents aside, there’s not much point having solar panels if the best sun for your roof is blocked by trees which are sacrosanct under current ACT tree protections laws – will they insist on changes to those laws if they hold the balance of power in the next Assembly?

Just when you thought that the major parties had the silliest ideas, someone else surprises you with breathtaking stupidity.

Independents, when you decided to give every household $10,000 of solar panels, battery package, a car charging station and subsidised rego for the cars, did you work out how much will our Rates increase by?
I’m guessing a lot!

Politicans and would-be politicians need to remember that a taxpayer meets the cost of every dollar you spend.

Just promise everything your electorate was and raise taxes to pay for it . The Labour way

Hey, anyone at Climate Justice Party care to comment on these smart vote “spiders” for your Murrumbidgee candidates? Where’s the environment in this? Note NOT singling out these two chaps but it’s odd. 1/2

A few of the questions are predicated on false dichotomies.

I’ve skewed my whole startup business model away from opportunities that would have seen non-recyclable materials head to landfill, and won national awards for the same…

And I have to stop myself from separating others’ recycling.
Etc etc

My results are similar.

Nice to know their approach is reaching people though!

don’t be fooled into thinking these minor parties are independent. the Belco party is full of liberals and funded by liberal donors and the Climate Change Justice Party appears bizarrely to be a front for the ACT taxi plate owners Association, who want to ban uber and give lots of public money to former investors in taxi plates, while the Federation Party were affiliated with Katter’s party at one stage (not sure if they still are).

Dolphin,
I’d be interested in how you see the Greens considering this comment.
Are they just another arm of the ALP by the same logic?

no – in my view the Greens have always been open and honest about what they stand for . The Greens offer a left of centre (mostly) alternative to Labor with their own platform and policies (whether you support them or not). they have stated publicly stated that they will not support a liberal government, but I think it would be stretch to suggest that they are somehow a front to to keep a labor government in power

I have no problems with people stating that they are independents and have voted for independents in the past. Personally I never vote for any person or party unless I have a clear understanding of their ideology, views on major issues, and how they make decisions. Just saying they are not one of the majors is generally a very poor reason to vote for them. I took the time to read the various parties policies. The Belco party in my view are not really open about the fact that they are full of liberals and funded by liberal donors and trying to appear as though the are actually independent. when you delve a little deeper into the climate justice party – they seem to have a lot to say about compensating taxi plate owners, which I found a little odd, and given their supposed focus in climate change.

Dolphin,
So how is that any different to the other parties you’ve mentioned?

We know that the Greens will only support a Labor government so they basically act as the Left Wing of the ALP in Canberra.

You think you’ve uncovered some secret that the Belco party has previous Liberals within it? I think it’s clear and obvious and it’s not like they’re hiding their positions.

Similar to the other parties, if it’s on their websites and policy platform documentation it’s not really a secret, is it?

How are the belco party an independent? They’re a branch of the liberal party!

So awesome that I installed and paid for solar in December. Missed the boat.

Hey Tom Adam, good on you for taking steps first 👏

The policy makes provisions to tailor a rebate for those that have already invested.

We definitely don’t want people doing the right thing to feel like they’re missing out.

Full details are going up on our website this weekend.

Luke George maybe we all need to re-evaluate our stance 😂

Luke Miller says the guy with no Tesla in the garage

Luke “ambitious” is pretty similar to all your parties policies 😂

Luke Miller shots fired 😂. I’m voting strictly on the outcome of a Tesla for me

Party convenor Petar Johnson has spent 6 months negotiating this with Australian battery manufacturers, they’re prepared to set up in ACT.
Another few weeks in discussions with the other minors.

Anything’s doable if you think outside the box, and have the right political / business connections & know-how.
This guy is Boss as.

I wish you the best for your Tesla also 🏎😎

(Do allow us to help you with the charging station)

And will that affect the solar rebates to individuals who already have solar?

Janet Ilchef if you have an existing arrangement that you have signed onto then it won’t change what you currently get. When your contract runs out then that’s a different thing.