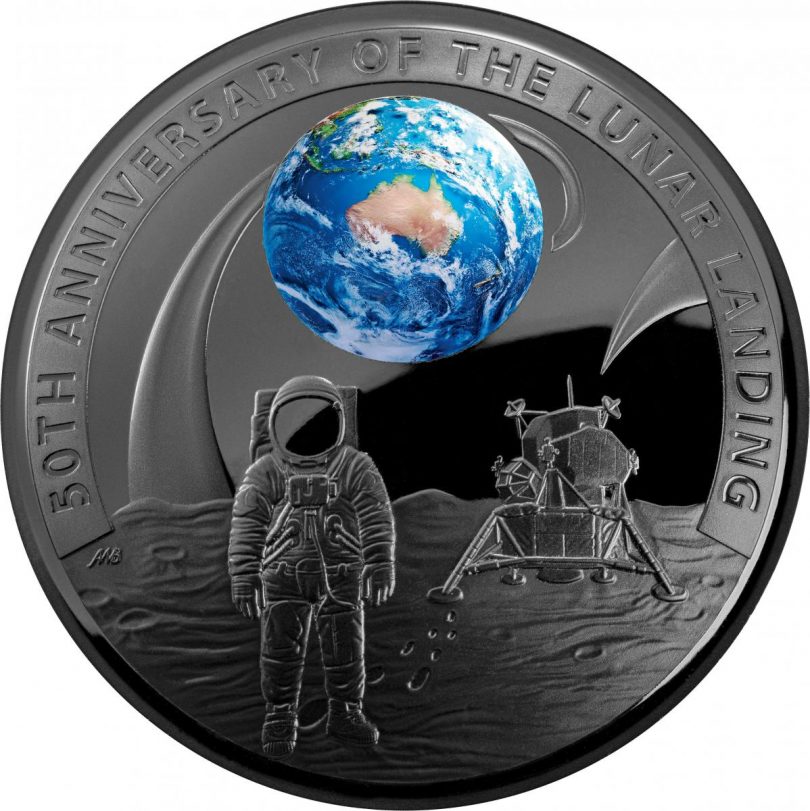 The reverse side of the world’s first dome-shaped coloured nickel plated coin, which celebrates the 50th anniversary of the moon landing. Photos supplied by the Mint.

The Royal Australian Mint has launched new limited edition domed coins to celebrate the 50th anniversary of the Apollo 11 Moon landing and the teams at Honeysuckle Creek and Parkes who helped share news of the ‘giant leap’ with the world.

Three new coins have been released including the world’s first dome-shaped coloured nickel plated coin, a domed gold coin and a coloured silver domed coin as part of a collaborative set with the United States Mint.

Royal Australian Mint CEO Ross MacDiarmid said the coins celebrate a historic triumph of science and human endeavour in Australia and the world.

“We are honoured to share these unique coloured domed coins, including the magnificent collaborative set with the United States Mint, to mark 50 years since Australia shared the first human perspective of the Moon’s surface with the world,” said Mr MacDiarmid.

The obverse of the new coins depicts the famous CSIRO Parkes radio telescope pointed towards the Moon, from which it is receiving television signals of the Apollo 11 lunar landing.

The text in the background is an excerpt from the transcript of Commander Neil Armstrong’s journal of the lunar landing. The effigy of Her Majesty Queen Elizabeth II is set into a circle at the base of the design. 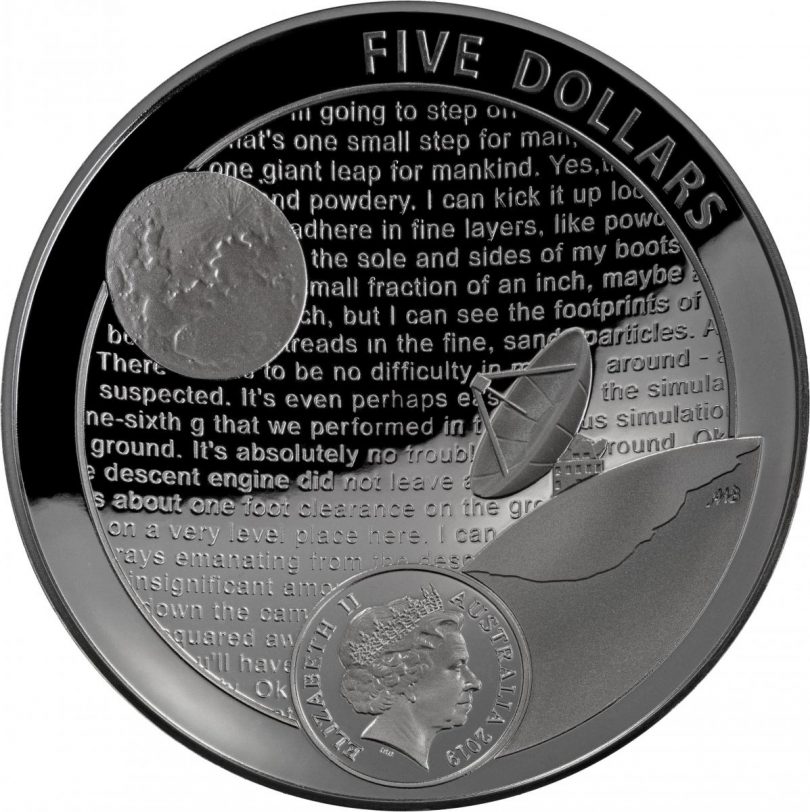 The obverse of the new $5 coin.

The reverse of the new coins depicts one of the Apollo 11 astronauts standing on the surface of the Moon, with the lunar module Eagle in the background.

The Earth, visible in colour in the sky behind the astronaut, shows Australia directly facing the Moon. A representation of the long journey taken by the Apollo 11 crew from Earth to the Moon is traced in the sky.

Providing support for the Apollo 11 mission was seen as an important demonstration of Australia’s expertise in spacecraft tracking and communication. Sharing news of the moon landing was made possible by the technology and Australian teams at NASA’s Honeysuckle Creek tracking station near Canberra and CSIRO’s Parkes radio telescope in NSW.

“Australia and CSIRO are world-leaders in radio astronomy and antenna design. This is why NASA came to Australia and the CSIRO Parkes telescope, for our support and geographic location. It’s also the reason why we continue to play a role in NASA space missions,” said Mr John Sarkissian, Operations Scientist at CSIRO’s Parkes radio telescope.

Former Honeysuckle Creek Tracking Station Deputy Station Director, Mike Dinn said the Apollo 11 Moon landing turned out to be the most dramatic event of the century.

“I was lucky enough to be in the right place at the right time to participate in a significant way,” said Mr Dinn.

“It was a triumph of engineering, and showed what can be achieved by humankind.” 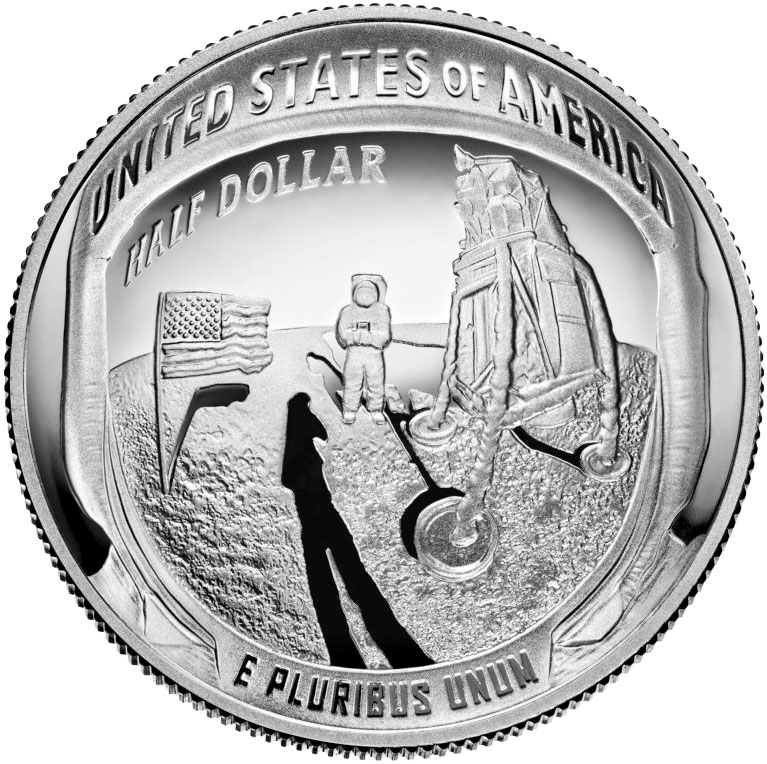 The new US half dollar coin. 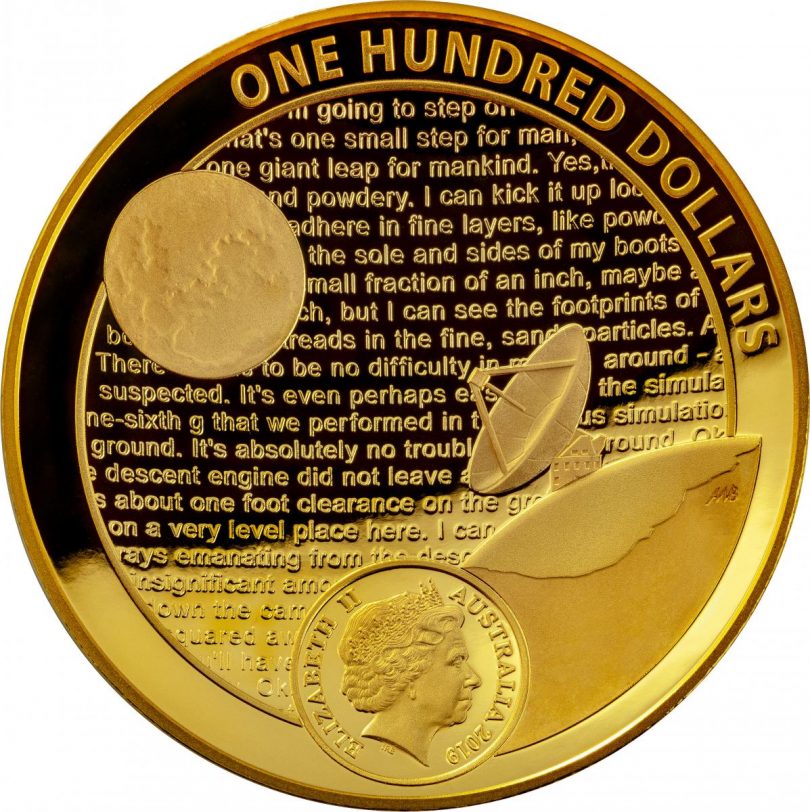 The coins are Australian legal tender and can be purchased from the Mint’s website or Contact Centre (1300 652 020).

Every Neil Armstrong in Canberra should get one free!

Neil Armstrong you deserved more likes for this!

Penny Neuendorf ... does your dad have these in his collection yet?

Jennifer Cheffers not these ones but they did an earlier series this year to celebrate Australias input and we have those. Thanks for thinking of me

Yes going to get me at least 2

I would love to have this. Remember watching the moon landing at school.

Yeah, I was the little kid in "The Dish".

Jonny Ivan - 3 hours ago
write this year off View
Joanne Mitchell - 5 hours ago
David Warwick and why did they remove the mask mandate two weeks before the first case while Sydney’s numbers were still cl... View
Callum Bowen - 6 hours ago
Completely agree with Simon. For years now we’ve turned a blind eye to thousands of annual flu deaths (and who knows from h... View
News 47

Claire Cat - 7 hours ago
Jo Hann I agree wholeheartedly X and it's for those reasons our family has chosen to opt out of distance learning and focus o... View
Jo Hann - 8 hours ago
Claire Cat at 6 years old, learning should be entirely play based. In the best performing countries in the world (with regard... View
Food & Wine 10