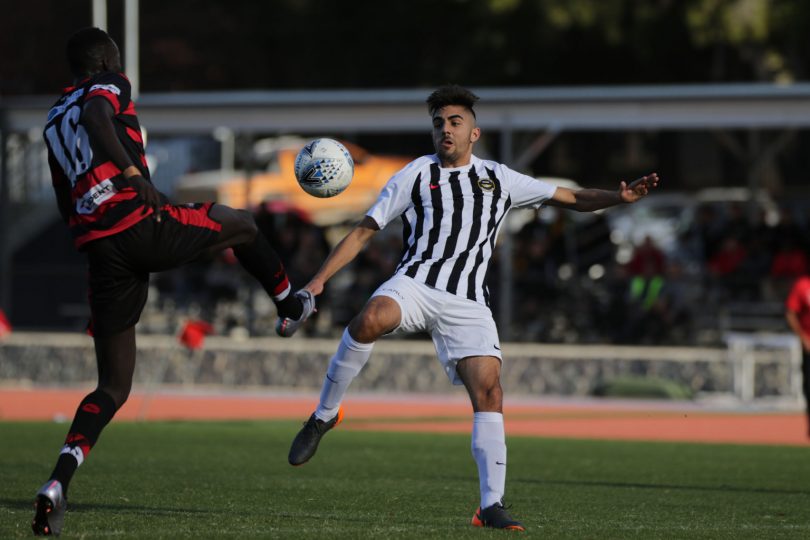 Gungahlin United had a terrific season last year, finishing in the top four and falling one game short of the grand final. Photo: Supplied by Capital Football.

Missed opportunities have been the story of Gungahlin United’s season so far, but head coach Marcial Munoz believes his team is ready to turn to the next chapter in their season.

United have struggled in front of goal, and have scored a meager three goals in their first four matches in the NPL this season.

Coach Munoz said the Gungahlin side could sum up their season so far as one filled with lost opportunities.

“If we want to sum up the whole season so far, we haven’t taken our opportunities when we have had them,” he said.

“We have been punished by teams that have taken their one, two, three opportunities and we are suffering on the ladder because of it.”

Munoz’s side had a fantastic 2017 season, finishing in the top four and falling one game short of the grand final.

Last year’s results left many clubs seeing United as a darkhorse for the 2018 title but Munoz believes his team is not folding under the added pressure and identified the game against top of the table Tuggeranong on Saturday afternoon as an important match.

“For me, it is still early days, and there are many games left and we have just got to get a few more points on the board and I am sure that things will come together.”

“We weren’t too far away on the weekend against Woden Weston, and this weekend is not a season-defining game, but it is important for us to get some momentum going.”

United started their season with three losses on a trot, but a win in the FFA Cup and a draw last weekend might be the first steps to turning their season around.

“I believe that to continue the momentum of at least two games without a loss is a good forward step to get us on the right track,” he said.

“The way that I have approached every week with these guys will not change. Of course, we need to adapt, because I think teams have started to plan well against us.”

“So we need to continually improve our processes on the pitch to make sure we are more effective and we can be a little more clinical.”

Peter Hatfield - 28 minutes ago
Or just go to the Jollimont and catch a comfortable coach and be in Sydney an hour faster, and at a fraction of the real cost... View
Greg Myat - 3 hours ago
Ross McConchie I agree with you entirely about using rail more to get trucks off our main routes. But trains are the most eff... View
Gail Annette Tregear - 4 hours ago
Canberra Airport has mow come of age but the Railway Station is much as it has always been. Most visitors don't know it exist... View
Opinion 49

Donna Hofmeier - 31 minutes ago
Why ? NSW Rugby have never been kind to us. View
Jay Annabel - 4 hours ago
If the emus don't mind travelling, why not? View
Matt Fallon - 5 hours ago
Dunx Fallon i rckn both View
Property 12

@The_RiotACT @The_RiotACT
The new #VaxTheNation campaign is urging Australians to get the jab for COVID-19 so music venues can return to hosting gigs and delivering live #entertainment https://t.co/lo3ejx179F (51 minutes ago)