An artist’s impression of the Luxe development on the corner of John Gorton Drive and Opperman Avenue in Wright. File photo.

Molonglo residents are readying for another fight against what they see as overdevelopment in their suburbs with two previously rejected multi-unit proposals back on the table.

POD Projects Group and 3 Property Group have lodged revised and slightly scaled back plans with the planning authority for reconsideration of their proposed developments in Coombs and Wright respectively.

POD had proposed a seven-storey, 123 unit apartment development on the corner of Arthur Blakeley Way and Colbung Street in Coombs, while 3 Property Group’s $58 million Luxe development would have seen a six-storey building with 212 apartments, and 32 two-storey townhouses on the corner of John Gorton Drive and Opperman Avenue in Wright.

Both developers sought lease variations to increase the number of dwellings allowed on the sites – from 40 to 123 in Coombs, and 107 to 244 in Wright.

ACTPLA had rejected the original applications mainly for being too big for the site, out of step with the character of the area, and in the case of the POD proposal its impact on neighbouring properties. The knockbacks were seen as a clear message to developers not to cram as many dwellings as possible on to a site and pay more attention to good design.

Ryan Hemsley on the Save Molonglo Facebook site says that by making only minor tweaks to the design of the proposed buildings, the proponents have indicated that they see no fundamental issues with the original, refused designs.

“If ACTPLA are serious about ensuring high-quality development outcomes in Coombs and Wright, then they should confirm the original decisions, and require that developers deliver a better standard of design to accommodate the higher-than-expected number of future residents who will be living on these sites,” he says.

POD has removed one level from Buildings 2 and 3 so that the maximum building height is six storeys and less than 21.5 metres, although a central penthouse means it remains seven storeys. It has also removed the eastern and western top corner units, bringing buildings 1 and 2 to five storeys to stop overshadowing of adjoining properties. This has also reduced the yield from 123 to 107 dwellings.

The area for deep-rooted trees and communal open space has been increased, as well as the front setback.

The Luxe proposal will still be six storeys of 212 apartments but two of the 32 townhouses have been removed to create a landscaped connection to the adjoining public path and park. 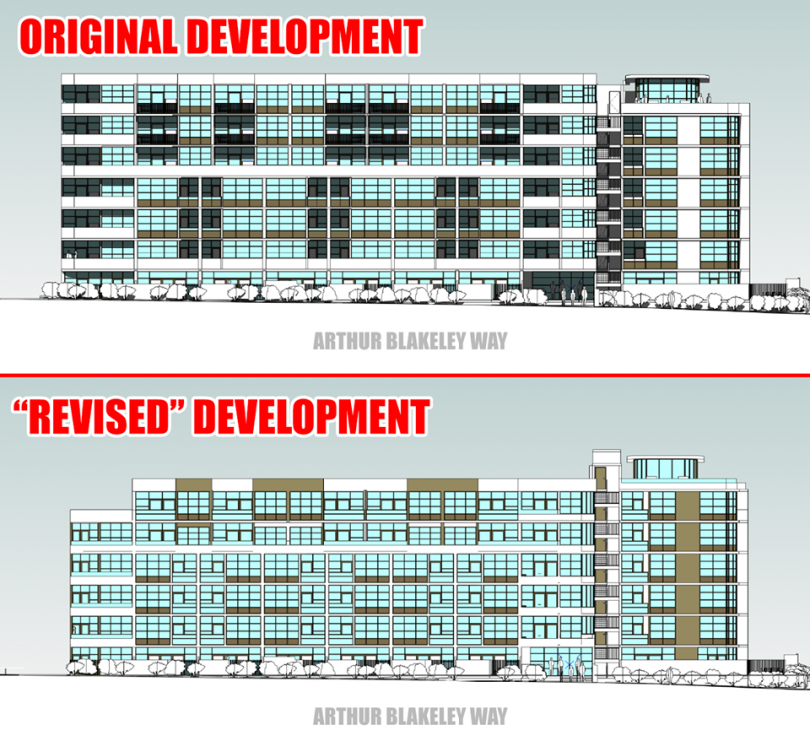 A comparison of POD’s designs from the Save Molonglo site.

Other changes include a new townhouse façade design, resiting of the townhouses to improve visual amenity, a bigger community open space area with additional landscaping and a shared zone for residents and vehicles.

Mr Hemsley says POD has done the bare minimum to make its revised proposal as close to technically compliant with the rules of the Territory Plan as possible, while completely ignoring the concerns that have been raised about the height and density of the development compared to its immediate neighbours.

He says it is clear that POD will not be backing down in their attempt to build a 100+ unit development on a site that was planned for a building no more than three storeys tall, and sold with a lease that specified a maximum of 40 dwellings.

“Their repeated attempts to circumvent these restrictions show contempt for a community that until recently had no reason to expect anything larger than what was originally shown on every publicly available piece of documentation,” he says.

Mr Hemsley told RiotACT that the original proposals had not been rejected due to objections from a small minority in Molonglo but from ACTPLA taking a tougher stance and enforcing the Territory Plan.

He said the Luxe development did not have neighbours and had only attracted four representations but ACTPLA decided not to approve it anyway.

Mr Hemsley said the community was also taking more of a stand because the quality of what was being built wasn’t up to scratch but in the end it was up to ACTPLA staff.

He warned that if developers could argue successfully that terms in the Territory Plan were too vague or ill-defined to be enforced the document would have to be re-written.

Catherine Sanders - 1 minute ago
Micknali Weyman you going? View
Greg Pearce - 2 hours ago
Julia Cook, Hannah Pearce, Georgia Pearce & Leslie Cook for you know who.... View
Lucas Hayden - 6 hours ago
This is one of the best facilities ive ever seen...... I am not a "horse" person but I almost became one just walking around... View
News 57

Capital Retro - 10 minutes ago
"I think voting should be proportionate to the amount of tax you contribute." So that means all people who don't pay income t... View
Maya123 - 3 hours ago
So you work in this area of research and know more than those who are studding it? Science is evolving as more is learnt. Whe... View
Capital Retro - 4 hours ago
Climate change was happening when this old denier went to school - we studied it as a natural thing. In fact, it has been hap... View
Opinion 64

Jon Rooks - 24 minutes ago
From what I've seen, drivers going at excessive speeds generally are going so fast they demonstrably have no regard for speed... View
Community 33

Jeff Smith - 5 hours ago
Did you know the small Taylor public Primary school in Kambah is above capacity whilst the nearby combined Primary & High sch... View
Kathy Sepulveda - 7 hours ago
Jessie Nicho I'm a little late to this but I agree with you 100%. All the money is going into the Northside Public Schools an... View
Sport 2