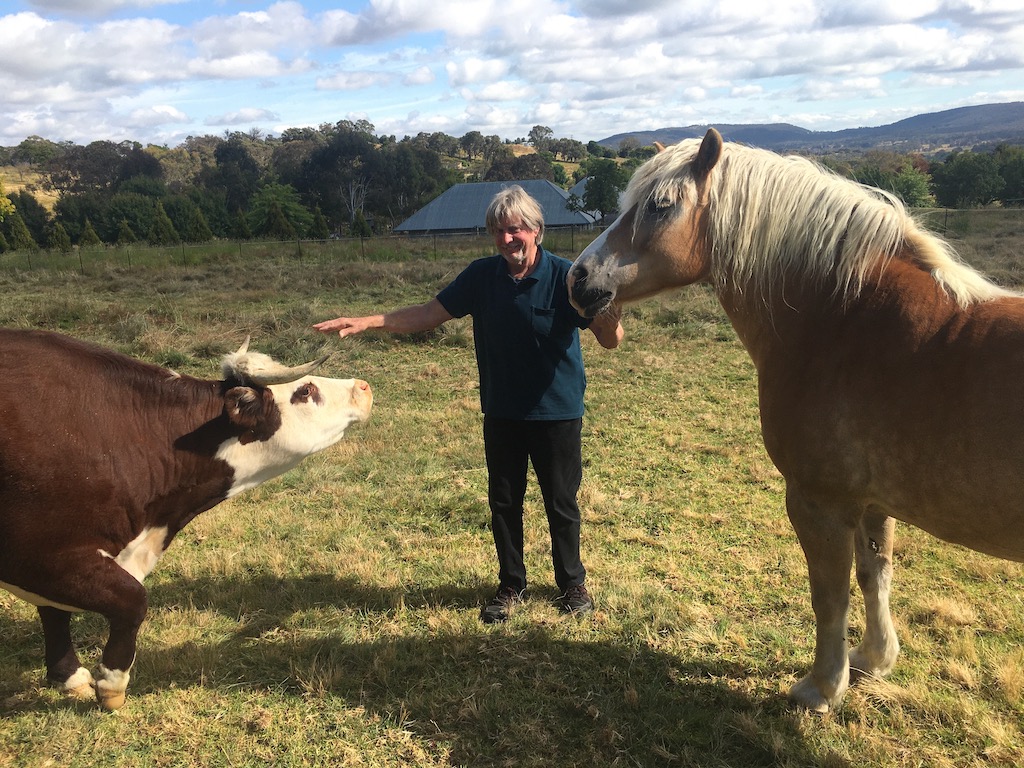 Several years ago a chestnut horse with a creamy coloured mane caught the eye of Doug Rawlinson.

“It was the prettiest horse I’d ever seen,” he said, after discovering the striking creature belonged to his long-time friend John Taylor.

Even though they’re in the thriving agricultural city of Goulburn, Doug and John are not interested in the commercial returns an animal may deliver – it’s their wellbeing as pets that matters most these days.

Lately Doug’s heifer Panda, a plump four-year-old Hereford with a dark roan coat, has been looking lonelier than ever, pausing for long periods while staring into nowhere as if looking for a mate.

Doug lifted Panda into his arms and carried her around from the day she was born until she grew too heavy. He taught her to jump over low hurdles, which she loved doing, but now she needed company.

Remembering that beautiful little horse from years ago, Doug rang John asking if he knew anyone with a horse that would make a suitable companion for Panda. It was serendipitous. As it happened John and his wife Penny were vacating their property and moving into Goulburn and their pet horse Alvin needed a home. So they have gave him to Doug for good.

Alvin is a Haflinger, a solid breed originating from Austria and known for their intelligence and calm temperament.

Alvin was bred on the Central Coast by a colleague of the Taylors’ daughter Faye, a veterinary nurse. A change in circumstances meant Alvin needed a new home, and the Taylors obliged, taking a float up north and returning with the then three-year-old horse, who is now 12.

“He had been very well handled and was used to all sorts of things with the girl who bred him,” John said. “He was pretty laid back.”

Alvin settled into his new surroundings effortlessly and quickly won the affections of the Taylors.

“I think he thinks Goulburn’s winters are very mild. He lives on the smell of an oily rag and will put on weight way too easily,” John said.

While the Taylors haven’t ridden Alvin, others occasionally have. One rider entered Alvin in the Tarago show and duly won a nice ribbon.

A harness horse enthusiast from Lake Bathurst, who had admired Alvin at that show, visited the Taylors and taught the horse and his owners long reining, a prelude for pulling a carriage. 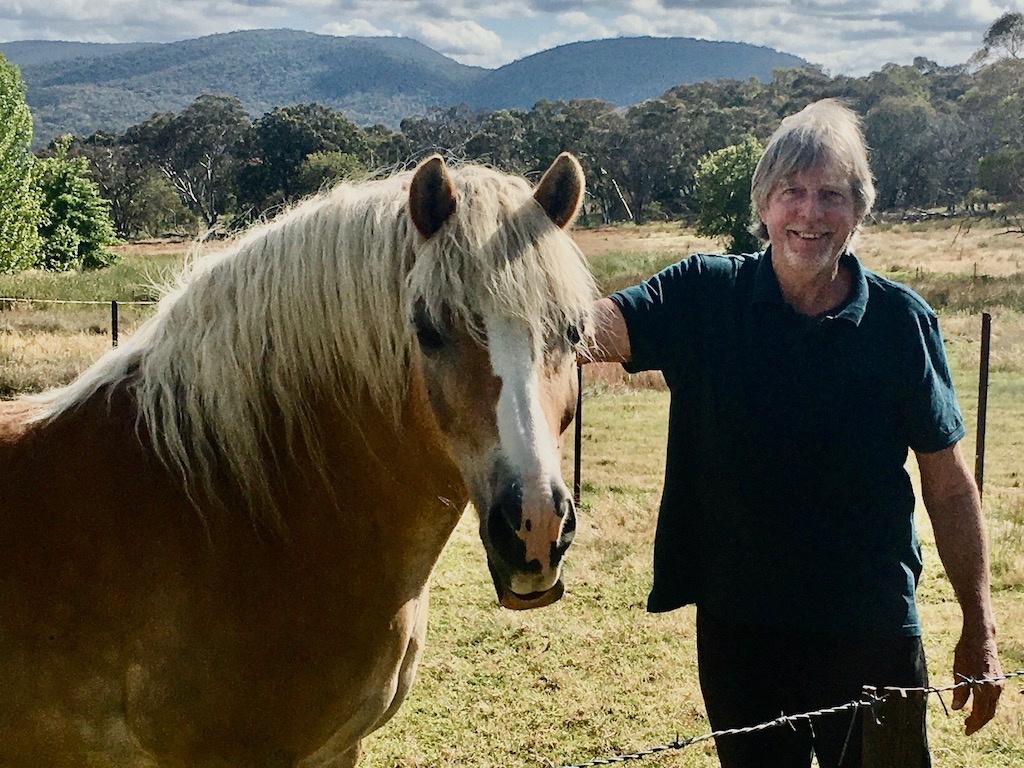 Alvin is pure bred with papers and likes being the centre of attention. He is pictured with his new owner, Doug Rawlinson. Photo: John Thistleton.

“If you go to the trouble, as we did when we showed him and at other times, when you groom him and get his mane and tail looking sparkly he can look quite spectacular,” John said. “He is really into people, likes people, likes their company. He likes attention, ‘talking’ to people and being involved with people.”

Alvin became a gentle companion for other animals on the Taylors’ place including a bull.

“He was quite happy toddling around with a bull,” John said. “The last five or six years we had a small pony, ‘Pippa’ that was given to us, she has been a companion to him too.”

As popular as Alvin has been, finding the right home for him once the Taylors left their property was not so straight forward. He wasn’t ideal for a children’s pony, John said.

“He is powerful and strong and a bit intimidating for them and tends to be a bit pushy with them,” he said. “He needs to know who is boss, weighing in the order of 600 kilos, he is too big a horse for little kids to handle.”

Alvin had problems with one eye too, which may flare again and John did not want his new owner to abandon and sell him. So he was thankful to hear from Doug about Panda’s need for a paddock mate.

“We were quite happy rather than find someone to buy him because of that known eye problem,” John said. “We can still see him, we will give Doug a call and go visit him with the grandkids.”

These days Alvin and Panda follow one another around in the paddock at Kentgrove, east of Goulburn. Occasionally Panda gives Alvin a long, affectionate lick as if to say “I’m so happy you are staying here”.