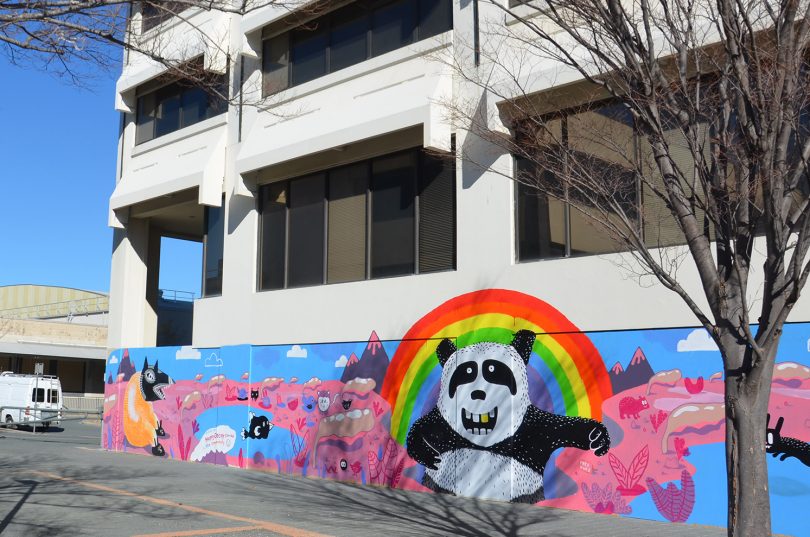 What better way to brighten up a Canberra winter than with a colourful mural!

As part of the Woden Experiment, a public mural has been painted in Woden Town Square under the guidance of Moruya artist Bjarni Wark. Bjarni was commissioned to enliven the temporary hoardings surrounding the Lovett Tower.

Bjarni led an initial session with Canberra College students, then over the next five days the artwork came together with groups including Youth Drop-in Session, Woden/Tuggeranong Group, ACT Diversity and The Smith Family, as well as interested others keen to leave their mark on the community mural. 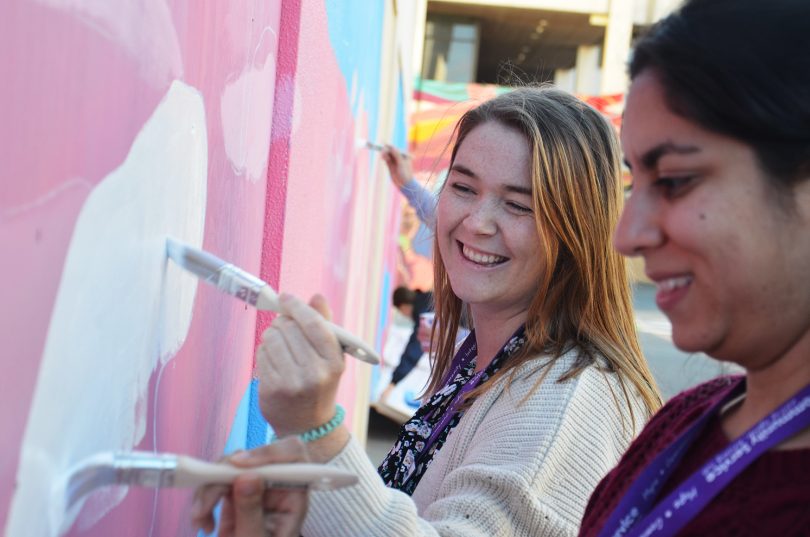 The mural was sponsored by Transport Canberra and City Services and facilitated by Woden Community Service and Tuggeranong Arts Centre.

“It has that placemaking – community development vibe that helps build the capacity of the community,” she says.

As reported earlier by Region Media, Woden Town Square is host to a pop-up experiment as part of its rejuvenation. The Woden Experiment is a collaboration with the ACT Government with the aim of making the place more vibrant and welcoming for the community, over six months. 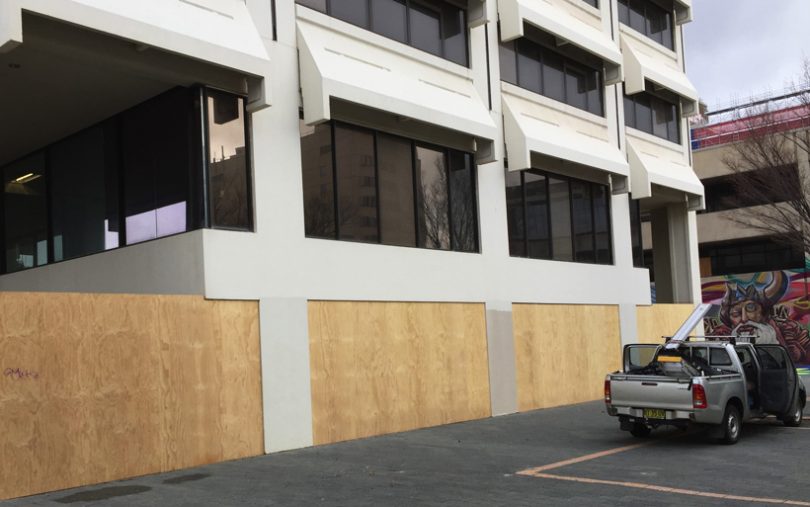 The blank ‘canvas’ for the Woden-Town Square Mural. Photo: Supplied.

Bjarni says, “It was great to be able to create this vibrant mural and work with so many people from the community, everyone who contributed to the mural got a real buzz out of it.”

“There was a lot of positive feedback each day from kids to senior citizens that were surprised by this new mural I was painting. It was interesting to watch people start to take selfies in front of some of the sections of the mural.

“It is a good idea having street art in places that would otherwise become vandalised and have a negative impact on the space and community,” he says.

Originally trained in fine arts with a focus on illustration, drawing and letterpress, the Moruya based artist works under the banner of ‘Happy Decay‘

Bjarni combines traditional and digital drawing and street art in his commercial illustration and business branding work. Aside from his work in Woden, Bjarni has recently created a mural for Art, Not Apart as well as the River of Art Festival in the Eurobodalla.

A spokesperson for Transport Canberra and City Services Directorate says, “This project [Woden] was focused on collaborative artwork and mentoring for young people.”

“The idea was for the work to be fun, creative, colourful and interesting.

“The building owners, Cromwell Group, were happy for the hoarding to be painted. The mural will be up until the hoarding is removed. This should be for a few months or perhaps longer. “

The program also includes a variety of Saturday morning workshops from make your own green cleaning products, to making kokedamas, weaving and macrame. Click here for more information on these activities.

Studio Connect Canberra will reside in the Square on Wednesdays from 10 am to 2 pm for five weeks making and creating a range of fun art that will be installed temporarily in the Square each week. During the upcoming school holidays, a range of children’s activities will also pop up including the first Biodanza workshop for children in Canberra.

Marko Potrebica - 9 minutes ago
What a fantastic idea. Congratulations to the organisers. Thanks you🏁🏁🏁🏁 View
Michelle Ayers - 7 hours ago
Yes please 🙏 View
Alec Millett - 7 hours ago
And not forgetting roundabouts, Adam. 😵‍💫😄 View
News 21

Brendo Collins - 1 hour ago
Maybe cause no one went to this actual facilty it is closing. Maybe if you attended it might still be open. View
Mookie Moo - 3 hours ago
This is so disappointing. I have not used this facility, but I have done weekly aqua aerobics as my main form of physical fit... View
Anne Maree Crowe - 5 hours ago
I feel for these people who have lost their water aerobics classes. Many elderly and people with mobility issues rely on swim... View
Property 16