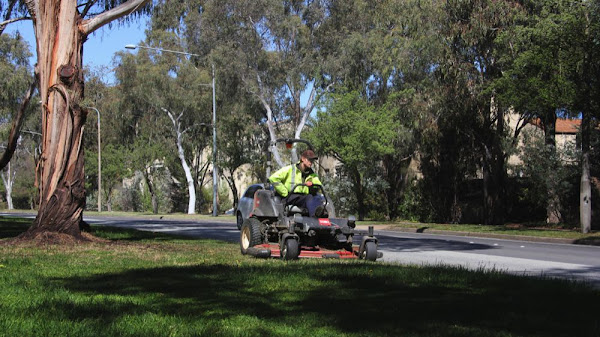 If you’ve been ignoring the encroaching jungle in the back yard on the basis that it’s too early in the year to be breaking the mower out then TAMS have bad news:

“Work crews will commence the program with the first major cut of suburbs and arterial roads across the ACT”, Fleur Flanery, Director, City Services said today.

“With the warm spring weather now here, it is time to commence this year’s program which will see the regular cutting of sportsgrounds, irrigated parks and non-irrigated areas such as neighbourhood parks, pedestrian parkland and arterial roads.

“The program utilises a base fleet of 102 mowers, comprising 66 internal and 36 contract mowers. Additional contract mowers are also employed throughout the mowing season where required.

“In addition to mowing for safety and access, the mowing program is an integral part of the ACT’s bushfire preparedness strategy with priority given to strategic fuel reduction as part of the overall hazard reduction program. Further mowing, specifically to deliver fire fuel reduction benefits, will commence in late October 2013, subject to the drying of grass.

“The mowing program also plays an important role in maintaining our parks and public open space areas enhancing the overall amenity of our city.

“This season’s mowing program runs from September 2013 to April 2014. There is a reduced program that runs during the cooler months,” said Ms Flanery.

And why do we need a media release telling us they’re going to start mowing…?

This is actually of some relevance for those of us who commute by bike on the shared paths. Because TAMS scatter the grass cuttings over the paths and don’t clean them up, it means that the paths can become more dangerous, especially after rain. It’s easy not to see a patch of wet grass clippings until you’re on top of them, particularly at night. I know of somebody who broke her collar bone when she hit such a patch on a corner a few years back. It also means that those nasty little seeds which are shaped like caltrops get thrown out onto the paths and cause many more punctures. More encouragement to ride on the road, unfortunately.

“Work crews will commence the program with the first major cut of suburbs and arterial roads across the ACT”, Fleur Flanery, Director, City Services said today.”
Must have been some good rains over winter for the roads needing to be mowed. Perhaps they should have many “road plant ahead” signs whilst conducting the bitumen trimming.

Maybe, but a public servant isn’t being paid to write and release my comment. I hope whoever’s job that is gets slashed should Abbott win tomorrow. There’s an easy $50K into the kitty.

You do know that Tony Abbott is not in charge of TAMS, right?

Maybe, but a public servant isn’t being paid to write and release my comment. I hope whoever’s job that is gets slashed should Abbott win tomorrow. There’s an easy $50K into the kitty.

Mowing Season – oh crap does that mean that since I did mine last weekend, I did it out of season??? Is there some penalty for such a crime?

I started my mower a few weeks ago after it has been unused for a while. will eventually get around to actually dragging it across the grass.

Lucy Irene - 40 minutes ago
Mmm, not sure why ‘rainbow’ roundabouts could be an issue, curious! View
News 36

Chris Liddiard - 2 hours ago
Kirsten Madsen thank you for this. I’m sure she will be interested. She is really missing band at the moment. View
News 51

Julie Macklin - 4 hours ago
Gregg Heldon That is when one car is stationary and the other car is moving. All the cars are stationary at lights. Fortunate... View
Property 39

Capital Retro - 5 hours ago
When you say "we", who exactly do you mean? How about you lead by example and tell us what you would do because many before y... View
chewy14 - 5 hours ago
Robert, Yes we do. The first part of that would, however be to admit that Indigenous people commit crimes at rates many times... View
Robert - 6 hours ago
Those numbers reflect the numbers of indigenous people in our jails. Surely we need to do something about aboriginal people b... View
Food & Wine 5