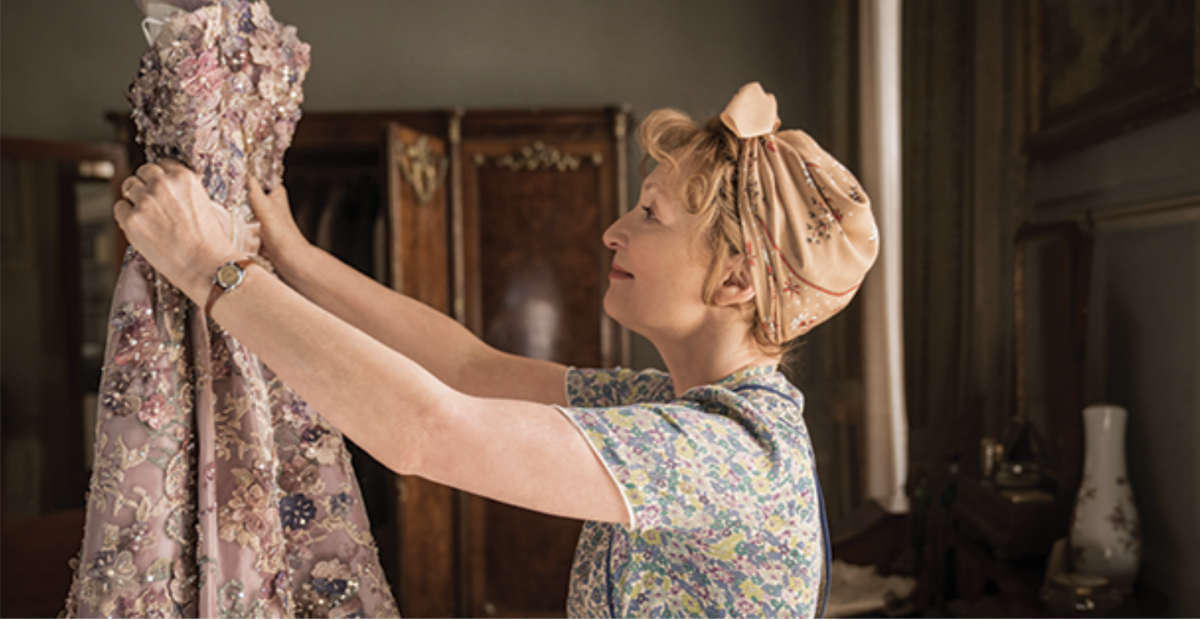 “Happiness is the secret to all beauty; there is no beauty that is attractive without happiness,” said Christian Dior.

There has been a tradition in British cinema over the past 60 years or so to focus on the personal struggles of individuals with attention to minute detail and the innate humanity of the individuals who convey those stories.

As the Ealing Comedies were winding down in the mid-to-late 1950s they were replaced by movies often as equally as funny, but focused more on the working class underdog.

Colin Wilson’s book The Outsider was gaining prominence and influence over British cinema, and the so-called kitchen sink dramas emerged.

Since then this notion has lost some of its edge but retained the essential elements of working class people struggling against the Establishment, corporate greed and so on. Look at movies such as Kinky Boots and Brassed Off.

The latest addition to this loose-knit group is the third adaptation of Paul Gallico’s novel, Mrs ‘Arris goes to Paris, this time adding the H, (Mrs Harris Goes To Paris), directed by Anthony Fabian and starring Lesley Manville.

READ ALSO QUIZ: When is a giraffe not a giraffe? Plus 9 other questions to test yourself on this week

The year is 1957, Mrs Harris is a war widow who cleans houses, mostly for the wealthy and indolent, and spends time around her dear friend and fellow cleaner Vi (Ellen Thomas) and bookmaker Archie (Jason Isaacs).

She also has a parcel, having clung to the idea her beloved husband Eddie may have survived the war and is still alive. On opening, sadly it contains his ring and a letter stating he has died in action.

But Ada Harris believes in luck and that every day happens for a reason. Throughout the film, she often says, “it’s a sign from Eddie”.

One day she is cleaning the home of Lady Daunt, and spies a Christian Dior dress in the cupboard. She is immediately entranced by its incredible beauty.

She vows that she has to go to Paris and buy “one them five hundred quid frocks”. Several lucky things then begin to happen, adding to the fact she is owed a significant sum of money as a war widow. This now gives her the means to fulfil her desires.

Once in the French capital, at House of Dior, she is met with severe resistance by the organisation’s manager, played archly by Isabelle Huppert. But then a friendly hand in the guise of the Marquis de Chassange gets her into a first showing.

When threatened with eviction, she puts her five hundred quid on the table and the tone lightens considerably. While she is unable to get the exact dress from the fashion show she has just seen, there is another one that is exquisite.

During this she strikes up two other friendships, with Dior’s financial adviser Andre Fauvel (Lucan Bravo) and one of the models, Natasha (Alba Baptista). They discuss Sartre’s Being and Nothingness, which Ada clearly understands from their conversations, as she has felt invisible most of her life.

From that point there are several difficulties and hurdles. But the iciness at Dior slowly thaws. Mrs Harris is beginning to see she is more than a cleaner – she is a woman who eventually finds happiness, and as Dior himself says there is no beauty without it.

The two stars of this film are Manville who as always creates a strong and endearing lead character with conviction and compassion; and Paris from which I’ve just returned, and as always is the city of swoon.

Mrs Harris goes to Paris is a delightful comedy drama. Sure there are some stereotypes and cliched moments, but it sails on a cloud of love and good will which I found thoroughly enjoyable. Three out of five stars.

Mrs Harris goes to Paris is screening at all major cinema chains.

Marcus Kelson is a Canberra writer and critic.