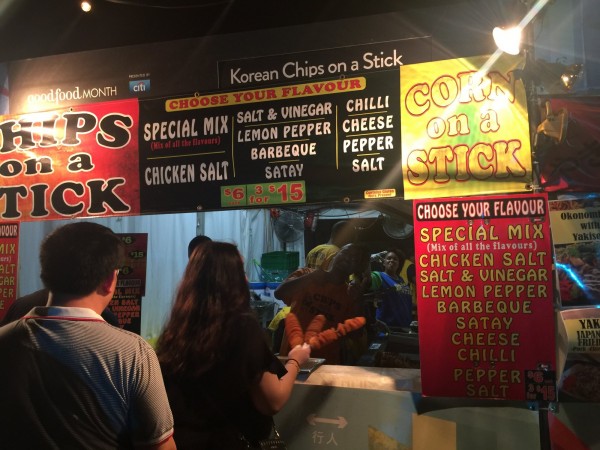 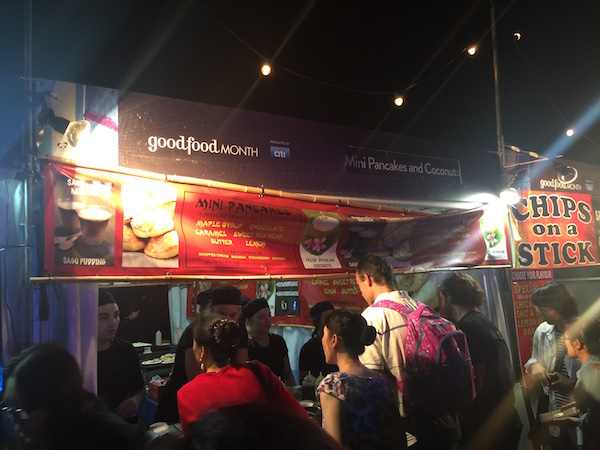 Remember the furore this time last year about whether it was appropriate for Dutch Pancakes and Chips on a Stick to attract hordes of customers during the Multicultural Festival?

Our article Calls for ban on Dutch pancakes, chips on sticks at Multicultural Festival was one of the RiotACT’s most-read in 2016.

We’ve been monitoring the activities of the purveyors of these contentious tasty street food snacks in the months since, and have noticed two strategic marketing tactics the businesses have employed to deflect the critics.

One criticism of the appearance of Chips on a Stick at the Multicultural Festival was that they were not multicultural enough. Certainly, their signage at the festival last year made no reference to cultural heritage. They were marketed simply, as you’d expect, as chips on sticks.

But when the stall popped up at the Night Noodle Market during Enlighten a few weeks later (right next door to the Dutch Pancakes), new signage had been added describing these curly strips of fried taters as Korean fare.

I’d be willing to bet the same signage will be used at the Multicultural Festival this weekend.

I will be very surprised, though, if it transpires that there are any Koreans working on the stall. While many (possibly even most or all, it’d be interesting to do a poll) of the other stalls at the festival are run by community groups, embassies, families and individuals from the nation whose cuisine is represented, the Chips on a Stick stall does not appear to be, or at least has not appeared to be in the past. Does this fact make any difference to the argument that the origins of chips on a stick are Korean and therefore it is appropriate for them to be sold at the festival? I’ll leave that for others to ponder.

Meanwhile, the Dutch Pancake stall at the Night Noodle Market had ditched the Dutch tag altogether, instead adding some South-East Asian touches by selling coconut juice in real coconuts alongside the pancakes, and offering a sweet red bean option as an alternative to lemon, butter, chocolate, caramel and maple syrup. Thus it found itself fitting in better with the Asian offerings elsewhere at the Noodle Market, from dumplings to satays as well as many varieties of noodle.

I suspect the pancakes will be back to their usual Dutch selves at this weekend’s festivities.

Will you be queuing for a plateful of pancakes, or some chips on a stick, or seeking out the sorts of food it’s harder to find year round? Czech, Bolivian, Kenyan or Mongolian, say? Do you have a favourite stall at the Multicultural Festival?

It would not be culturally inappropriate for the Dutch to present food with an asian influence. As the European colonisers of Indonesia, the Dutch took quite a few things home. For example, chips are often served with a satay peanut sauce in Holland (in a paper cone, not on a stick).

To be honest, I always thought they provided value for money compared to the rip-off provided by many of the stalls. Every year I go, the quantity of food has consistently gone down while the prices have gone up substantially. So no, don’t ban these these because they taste good and are cheap compared to to rubbish offered by some of the stalls.

Chris Cross - 32 seconds ago
Layla Barry almost $1 TRILLION and counting, courtesy of Federal Liberals, who almost scared the nation into recession with t... View
Pam Wood - 3 hours ago
Another rort in progress View
Jason Preston - 16 hours ago
Buying your vote with your kids View
ACT Election 16

Jeff Smith - 1 minute ago
Darron Marks The school closures in the South are not just as simple as 'the area no longer being a nappy belt'. Schools in t... View
Darron Marks - 7 hours ago
Schools being closed I would assume is a direct reflection of the change from the Southside being the former nappy belt of th... View
Evan Hawke - 7 hours ago
Darron Marks Yep, as the Government has been putting in great infrastructure in Gungahlin they have been downgrading the infr... View
Lifestyle 9

Paroksh Datta Prasad - 5 hours ago
Adam Burzynski I called it in 2013 hehe View
Adam Burzynski - 6 hours ago
Paroksh it has begun.... View
Scott Humphries - 22 hours ago
"Braddon of the south" . So the light industry and commercial businesses will eventually be pushed out by apartments, just as... View
News 14