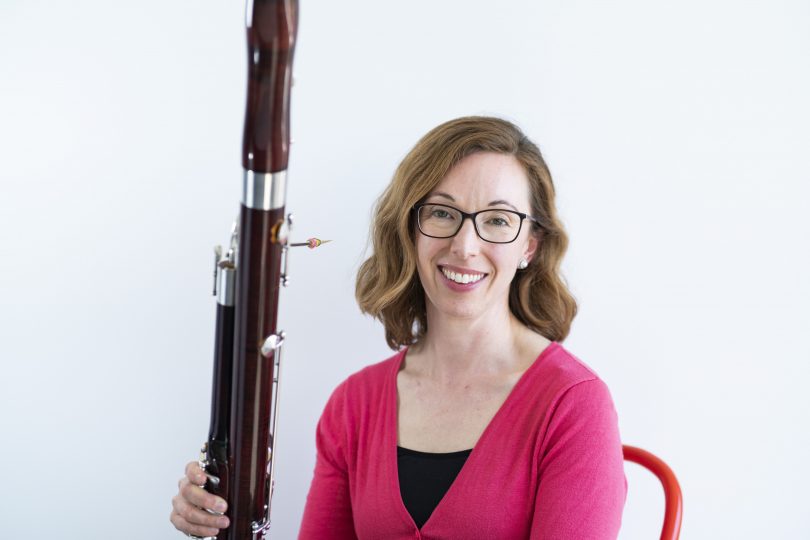 The CSO’s Kristen Sutcliffe: ”What I enjoyed most was seeing the effects on the ground.” Photo: Martin Ollman.

Music has been shown to reduce disruptive and negative behaviour in people suffering from dementia, according to the results of a pilot program conducted by the Canberra Symphony Orchestra at an Ainslie aged care home.

The Music and Memory pilot program was developed in collaboration with third-year University of Canberra Bachelor of Psychology student Heather Roche, and delivered in partnership with Goodwin Aged Care Services and ActewAGL.

The program specifically used a personalised playlist in a bid to change behaviour, particularly to calm any agitation or aggression that can be part of the dementia setting.

Despite the limitation of the number of participants imposed by COVID-19, the results from questionnaires at the beginning, half-way point and end of the program showed a statistically significant response across a range of behaviours.

CSO basoonist Kristen Sutcliffe, who oversaw the program, was delighted with the results and hoped it would spur further research and convince aged care providers to consider music as a non-invasive therapeutic option.

She said behaviours monitored included insecurity and restlessness including hiding, hoarding, end-of-day agitation and wandering at night, all of which were reduced over the period.

There were also significant reductions in repetitive behaviour such as pacing, repeating the same thing over and over again, asking for things that aren’t actually needed, and shadowing or following a favourite carer.

The incidence of physical and verbal aggression also came down over the eight weeks. 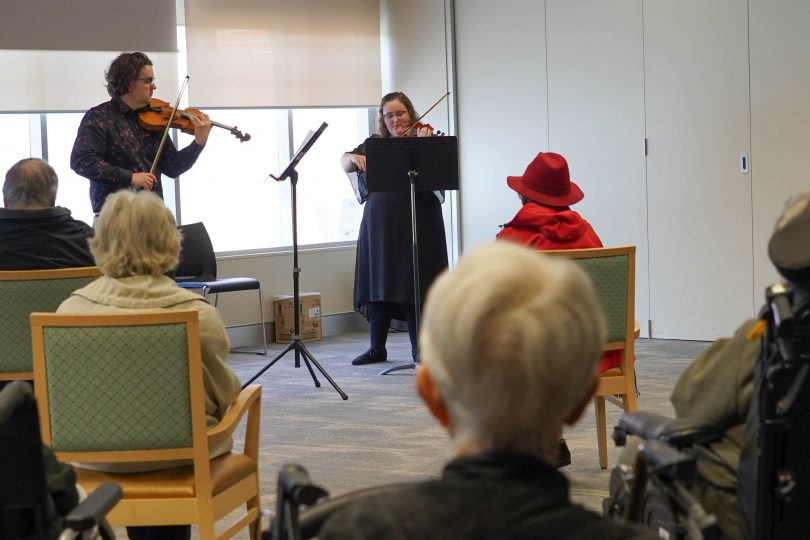 A violin performance during the Music and Memory pilot program. Photo: Goodwin.

The statistical analysis data showed that from baseline to week 8 most participants reported a decrease in the frequency of insecure or restless behaviours from multiple times a day in the last month to once a week or less.

”There was also a decrease in the frequency of repetitive, physical and verbally aggressive behaviours from multiple times a day or several times a week in the last month to never,” it said.

Ms Sutcliffe said in some incidences the change in mood was startling.

She said Goodwin staff had told her that at one point they were not going to take one participant to the concert space because she was highly agitated and swearing at them. But she settled immediately and relaxed to the point that she actually fell asleep for a time.

”What I enjoyed most was seeing the effects on the ground,” Ms Sutcliffe said

She said Goodwin staff were very positive about the program and could see the benefits first hand.

They indicated that they saw the concerts as highly positive for participants, with benefits ranging from the calming effect of the music to increased engagement and social interaction.

”If you look at it from a more holistic person-centred care point of view it’s got to be beneficial,” she said.

It could also reduce the amount of medication used, she said.

”Pharmacological interventions often have side-effects, and they are often on other medication as well so if there is something non-invasive that can have these beneficial effects that’s got to be a good thing,” Ms Sutcliffe said.

She said there had been interest from other care providers, including from interstate, in the program and its results.

Goodwin Executive Director of Care Jamie Fillingham said music has always been a part of life at Goodwin. “It’s great to see the positive effects highlighted through this program,” he said.

Group Manager of Strategic Partners and Energy Solutions at ActewAGL Sean Davis said the utility looked forward to supporting the project in the future.

“We’re energised by the emerging findings of this program, which shine a light on the ways music can make an impact in the lives of people with dementia,” he said.

Interesting. Is it all music or just music a person liked at some stage in their life? 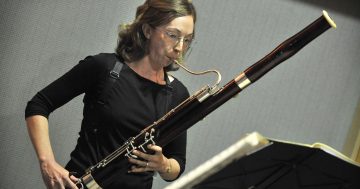 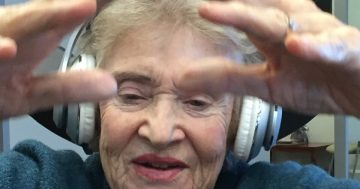 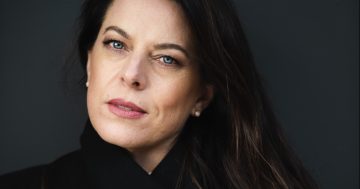