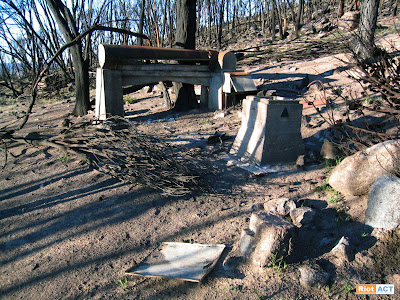 Having been inspired by Old Canberran’s photos, I thought I’d add my own local mystery object photo. Clues number one, and two. 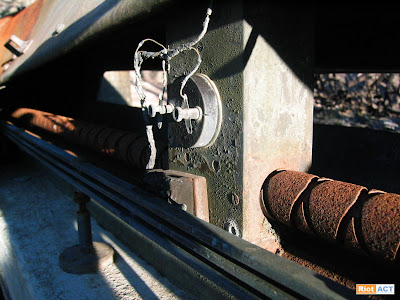 its a time machine. you should find the delorean around there somewhere too.

The following is the answer I received in 2003 when I queried the ANU about this discovery:

“The relic is the old Personal Equation Machine (PEM) which was used back in the 1950s and 60s to calibrate the reaction times of observers using the Time Service transit telescope. From WW2 to the mid-1970s, Stromlo was home to the National Time Service, now part of Geophysics Australia.

“The transit telescope was used to correct pendulum (later atomic) clock time for Earth rotation, which is never smooth. The observations involved timing the exact instant at which standard stars crossed the meridian. This was done by watching the star pass a crosshair in the telescope, so it was vital to know is the observer was consistently ahead or behind the event.

“The PEM had a pinpoint light source which travelled back and forth along the helical screw. Thge observer would sight the transit telescope on the PEM and hit the timing button at the instant they saw the light pass the crosshair. The electrical section of the PEM would measure the difference between the true time at which the light source passed the centre of the track and the time the observer saw it do so. Evidently it could measure millisecond differences, and each observer was remarkably consistent in their error.

“We “rediscovered” the PEM three years ago and were intending to recover it, move it to the visitors’ centre lawns, and get it working as a reaction time exhibit. The extra damage done by the fire has probably made this impossible. I looked at it again last week and the screw is now warped to the point where we would have to replicate it.
We would have to remake the light source and timing circuitry as well.

“Given the current rebuilding priorities at the observatory, I suspect the PEM will be left where it is for many more years for more hikers to find and wonder at.

A fascinating piece of old-tech indeed. I took quite a few photos at the time, trying to document as many bits as I could before they degraded further. If you’re interested in the photos you can email me as monsieur_aubergine at Hot Mail dot com.

Wow that is awesome!

Thanks Aubergine for that brain teazer and also to the carpet man for the solution. I doubt whether anyone would have solved that little poser.

The Mystery Machine is not a time machine, but one could call it a
‘timing machine’.

There used to be something called a PZT telescope on Mt Stromlo.
Erected in 1961, it was donated to the Museum of Victoria in 1990.
The PZT was used to measure the time of transit of stars across the
meridian. Many observers were involved, and each introduced a certain
bias in making an observation. The Mystery Machine was constructed
for the purpose of training the observers and measuring their biases.

The long screw, part of which can be seen Aubergine’s second photo,
moved a small torch bulb back and forth in a known and repeatable fashion.
This artificial star would be observed through a small telescope, situated
about a kilometer away.

Yes, I know what it is and want you to guess. Cranky and Jerry Built are on the right track. Last time I checked it a few months ago I could barely get to it, the regrowth was so dense. I first found it shortly before the fires – wish I’d had a camera with me then. It had been long since abandoned even then but the fires did it no favours. More photos available but I don’t think I can post them directly. Oh, OK, yes it’s on Stromlo.

Is it a landing signal for the alien landing strip?

I’m just waiting for the sun to get a bit higher so I can see the thingy in the top photo a bit better.

Time machine, no doubt about it…

something to do with very fine measurement… Is it the laser ranging whatchamajig from Orroral Valley (above the tracking station)?

Looks like it had electronics, and very finely machined parts…

The white unit in the second photo appears to travel from one end of the brown rod to the other, and then reverse direction. Cant imagine that it was knitting a wire fence or something though.

Would love to examine it if it still exists. Is it possible to get directions?

where were they taken? looks like after the fires… obviously.

So, you know what it is, and you want us to guess, or you want to find out what it us?

Looks like a boring machine. Boring as in hole in the ground…

@The_RiotACT @The_RiotACT
With access to industry, research and retail, a new Poplars Innovation Precinct deal is set to open opportunities for @UniCanberra students https://t.co/aRsFLTnv3Q (50 minutes ago)