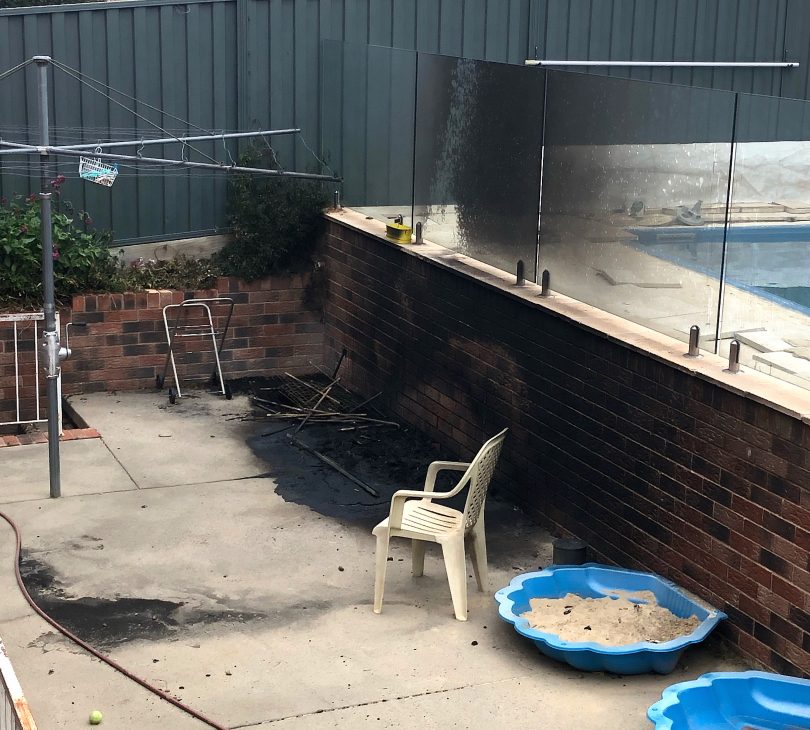 The backyard of the Karabar house where the fire started. Photo: Supplied.

A Queanbeyan resident is hoping to find a mysterious good samaritan who saved her house and dogs when a fire broke out in her backyard last week.

Sindee Gibson told Region Media she and her family have tried to find the man, who jumped a fence, secured six dogs in the backyard and put out the fire, which is believed to have started when a Woolworths Discovery Garden self-ignited.

The fire occurred at Sindee’s Karabar house at about 1:30 pm on 16 October, while she was out for about two hours.

“I had no idea anything had happened until my daughter got home. She rang me and said there’s been a fire,” Sindee said.

Queanbeyan Fire and Rescue were called to the fire, but it had been extinguished by the time they arrived.

Sindee said she called the station to find out what happened and they told her that a man, who was an ex-fireman, jumped the fence, put out the fire with a garden hose and secured their dogs. The man did not leave any details.

“I still don’t know who this man is,” said Sindee. “Nobody seems to have gotten any details. We’ve asked around the neighbours and all we know is that he was visiting somebody in our street.

“I really want to know who he is so I can thank him. He saved our house, he saved the dogs. I just want him to know that he did a wonderful thing.”

Four of the dogs belong to Sindee and she was dog-sitting two others for a friend.

Sindee said firefighters at Queanbeyan believed the fire started when a Woolworths Discovery Garden planter kit self-ignited in the backyard. It was about three metres from the house against a wall.

Each seedling kit comes in a cardboard wrapper. The pot is made of plant fibres and the soil pellet is made of coconut husk.

“What the firies think happened is that it was like a magnifying glass in there and it got very hot,” Sindee said.

“My kids had them in a little greenhouse and everything in there perished including the greenhouse, which was up against the wall near where the washing was. I had just taken the washing in before I left home.”

Sindee said she thinks the Woolworths planter kits are a great idea but she recommends they are put into bigger pots to avoid them heating up in the sun.

“I just want people to be aware that this can be a hazard. There’s enough fertiliser in the cardboard pockets they come in, which was enough to set it off.

“It’s a fantastic idea to get people to grow plants. I love the idea of it, but I’d hate to see somebody’s house burn down.” 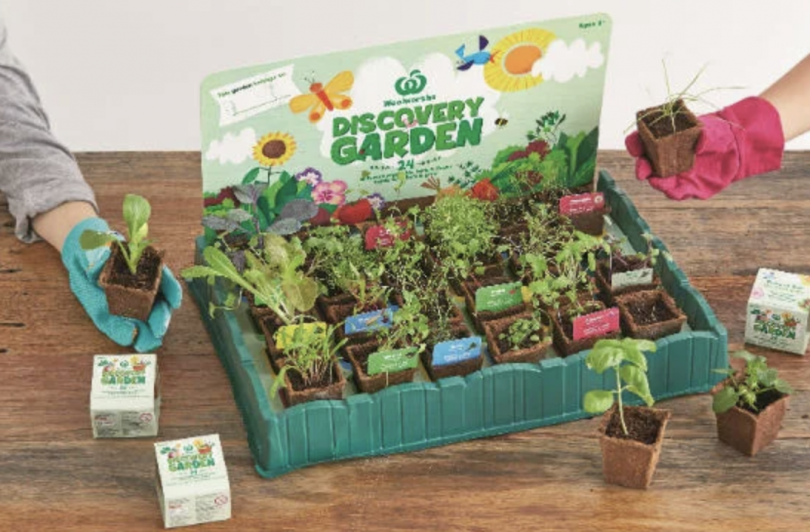 This is not the first time one of the Woolworths Discovery Garden kits have ignited, with reports earlier this month that another of the kits had self-ignited after being left in direct sunlight.

A Woolworths spokesperson said the packaging on the box advises customers to keep seedlings out of direct sunlight.

“As a general gardening rule, keep your plants out of direct sunlight for prolonged periods and away from surfaces that may increase the intensity of direct sunlight, such as metallic surfaces,” Woolworths said in a statement.

“It is also important to check that the soil is adequately watered. Soil that requires watering will be dry and dusty to the touch and may also be a lighter colour. Seedlings need to be kept well watered in order to thrive.”

Sindee says she is just thankful for the heroic efforts of the man who saved her house and dogs.

“I’d love to know who he is. We’ve put a notice on the Canberra Notice Board and a couple of other places, but we haven’t been able to reach him,” she said.

“I can’t thank him enough. He saved the dogs from getting injured and particularly the house. I’d love to buy him a beer and thank him.”

Chelsea Lifschutz the poor succulents in the bathroom. They are in danger

Six dogs in a suburban back yard. Really

Chanel Cen be careful with your seed kits!

Lachlan Gilmour-Murray exactly what I thought

He wishes it was him, but alas he was not in quangers that day lol

James Barron Julie Barron what did I tell you?

Tania mine haven’t yet

Bit further in the article, it explains that the kit was put into a clear plastic shelving (not part of the kit) which acted like a magnifying glass, concentrating heat on the cardboard plant boxes… which makes a lot more sense!

Had me raising an eyebrow too :S

Warren Brown and that’s a granted reason why they should not ignite?? My dog has not bitten anyone in ten years, that however doesn’t mean dogs don’t bite… I hope you understand that ‘mine haven’t’ does not mean others won’t!!

Sarah Jane Walden wondering if we should keep Lachie’s.

Wow. That’s a really nice thing the “Mystery Man”, retired fireman did 😊.
Good to know about the potential for spontaneous ignition due to fertiliser in the seed kits igniting under certain conditions. Direct sun and Australia are almost synonymous. Prudent to know precautions are needed, particularly as the marketing is aimed at children.