National Arboretum powers up with solar panels and batteries 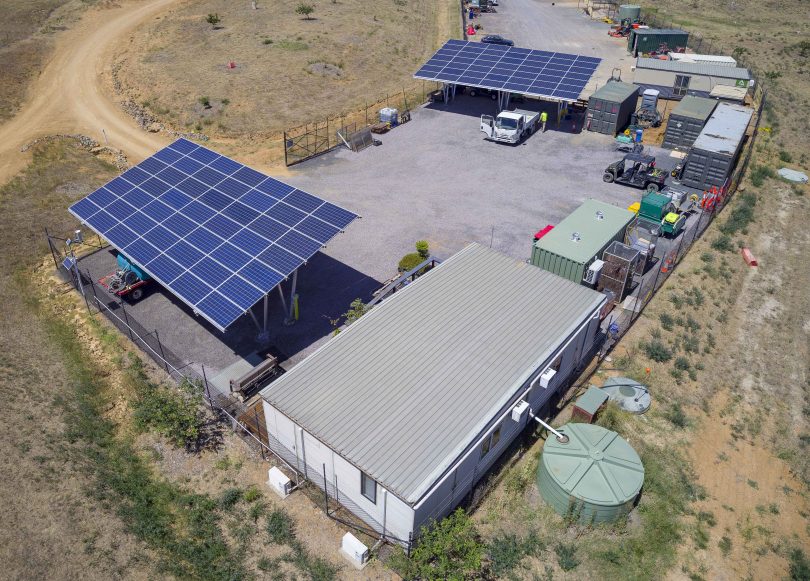 New solar panels and battery storage at the National Arboretum’s horticulture works depot has replaced its diesel generator and enabled workers to use electric tools, as well as reducing the ACT’s greenhouse gas emissions by an estimated 28.5 tonnes per year.

“This renewable energy project will result in significant reductions to greenhouse gas emissions estimated at 28.5 tonnes per year. This is the equivalent of taking 11.8 cars off the road each year,” Mr Rattenbury said.

“The project makes financial sense as well with the installation cost of the new system expected to be repaid using fuel savings within eight years and then ongoing financial savings thereafter. Solar will also provide a more reliable electrical supply to the depot than the previous diesel generator.

“I am pleased that one of the more iconic locations in Canberra, which is committed to a range of environmental projects, has seen the benefits of utilising solar power.”

The project has been made possible through a $283,330 loan from the ACT Government’s Carbon Neutral Government Fund, which will be repaid within eight years.

The Carbon Neutral Government Fund provides loans for agencies to implement energy and fuel saving projects, and Mr Rattenbury said repayments to the fund would be recycled into other projects across other parts of government where it was trying to make the transition to clean energy.

“The Fund has now supported 26 projects with a total of $14.5 million in loans provided across ACT Government which will provide more than $2 million in annual cost savings,” Mr Rattenbury said.

Mr Rattenbury said the strength of a solar installation like this was that it was off-grid, so there was no need for power lines.

“It’s ideal for remote locations but the way that the price of batteries and solar panels is changing the two options are becoming more and more affordable for a range of applications,” he said.

National Arboretum Executive Manager Scott Saddler said the new system made for a safer and quieter work environment for staff.

“I came down yesterday afternoon and it was the best time because the diesel wasn’t running and I couldn’t hear a thing. It also powers up all of our tools and the greatest thing about that is they’re not using fuelled machines they’re using solar powered battery operated tools,” he said.

Mr Saddler said the system had been built for add-ons in the future, so when the depot gets bigger it will have sufficient power.

He said the Arboretum may also put one of the car parks under a bespoke car port with solar panels on its roof.

Julianne Caplice - 57 minutes ago
I hope that doesn't mean you have tasted it Erica! View
Opinion 35

Ollie Skylark - 1 hour ago
aren't all cities planned to some extent? What is so special about Canberra planning? How is it different from other capital... View
News 3

MERC600 - 2 hours ago
Well I guess if there won't be any concern of this leniency, and there will be no unwanted effects, we should see the same ap... View
Patrise Dowling - 4 hours ago
Current policy hasn't stopped or even abated the illegal drug business. Time to try something else. View
Paul South - 7 hours ago
If it works for Portugal View
News 1

Lazza Sant'Ana - 6 hours ago
👍🏽 I am! I had some yummy Brazilian picanha with farofa and molho vinagrete just last weekend. Highly recommend this. Y... View
Property 3

Is it worth adding a battery to your home’s solar system?

@The_RiotACT @The_RiotACT
Missed out on your dream home at auction? Buyers are being urged to stay calm as emotions run high at #Canberra properties https://t.co/ZhRjJEH5ID (20 minutes ago)

@The_RiotACT @The_RiotACT
#BREAKING Did you go to Sydney over the long weekend? A new COVID-19 case has emerged in the Eastern Suburbs and ACT Health is urging Canberrans who travelled to keep an eye on NSW Health's exposure sites https://t.co/QqE7EjxxE6 (1 hour ago)

@The_RiotACT @The_RiotACT
Tributes flow for Canberra man Nigel Harris who died on Monday when a vehicle left the track in the Tatts @FinkeDesertRace near Alice Springs https://t.co/PwN9u62fZq (2 hours ago)