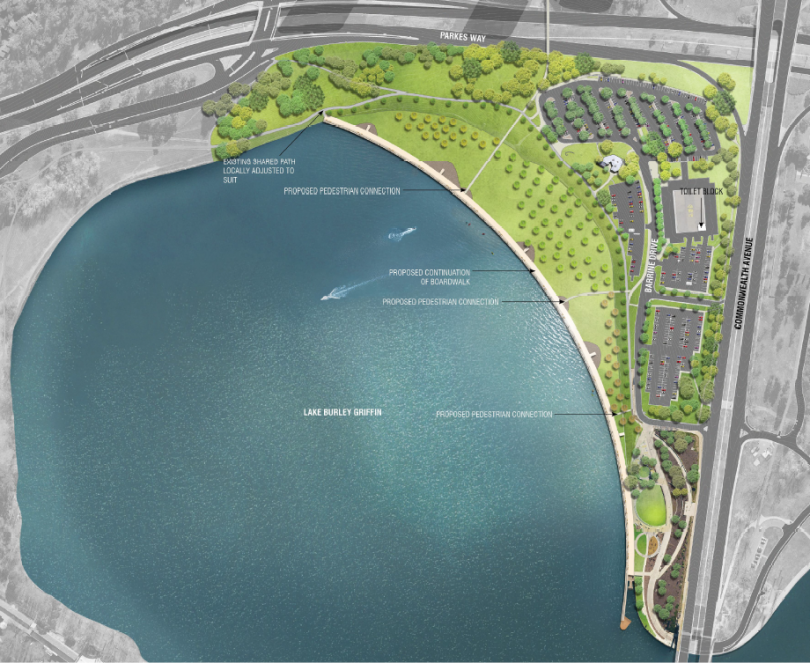 All work on the West Basin area should cease until a complete environmental and heritage assessment has been made, according to the National Trust (ACT).

The Trust has slammed the ACT Government’s redevelopment plans and accused it of treating the planning system as a cash cow and deliberately misleading the public for linking the Griffin Plan to the project.

In its submission to the National Capital Authority on the City Renewal Authority’s works approval application for the proposed next phase of development at the key site on Lake Burley Griffin, the Trust says it cannot support the overall redevelopment in its current form, which eventually will include apartment blocks.

The works approval application is for a 500-metre extension of the boardwalk from Henry Rolland Park, street lighting and street furniture, the removal of 120 trees, demolition of the former boat hire building and jetty, and land reclamation works between the current lake edge and the newly constructed boardwalk.

It is part of an overall plan for a waterfront, and public park and spaces, in front of possibly 2000 apartments.

Community activists, the Lake Burley Griffin Guardians, have fought the proposal from the beginning, and the Trust has now thrown its weight behind their arguments that the redevelopment will damage the lake environment and its heritage values.

It says the ACT Government has used the cover of the Griffin Legacy National Capital Plan to promote development of West Basin, calling such arguments misleading and irrelevant.

”The fact that Griffin and the National Capital Development Commission (NCDC) had given a more regular shape to East Basin, which was altered to its current shape when Parkes Way was constructed, is no justification to fill in part of the Lake to create a more regular shape now,” the Trust says.

It says it is false to claim Griffin had proposed urban development for West Basin.

”It is also clear that the main focus of the ACT Government has been developing prime national land for revenue-raising and West Basin is just one part of this strategy. It is wrong that the national capital assets are treated in this way,” the Trust says. 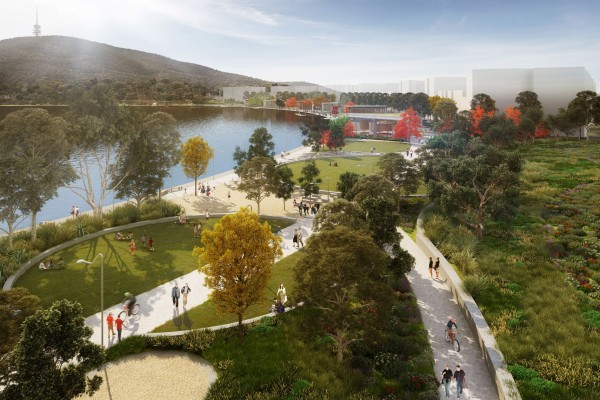 An artist’s impression of the West Basin waterfront once completed.

It says the fact that the site has been run down and neglected for years is not a reason to create a high-density urban development there.

”The area can and should be made more attractive to Canberra residents and visitors through modest capital investment and more public facilities and concessions,” the Trust says.

”The public’s right of access and accessible parking should not be a casualty. We do not support a massive expansion of apartments between the city and the Lake which will impact on a range of heritage issues.”

The trust says the most recent heritage impact assessment was in 2015 and is now out of date, and environmental issues have not been addressed.

”There is no assessment of flora and fauna even though the Golden Sun Moth lives within the area, geological features on the Lake edge further around towards the National Museum of Australia, evidence of Indigenous presence in the area, and other water-related heritage and environmental issues, including wildlife habitats,” the Trust says.

”Also under threat from West Basin is the iconic view of the Brindabella Mountains from Commonwealth Avenue, south from City Hill and over the Lake. That this vista is potentially under threat is unconscionable.”

Calling the West Basin proposal part of a broader malaise in the planning system, the Trust says that since ACT self-government in 1989, the Commonwealth has in effect ceded control of national area planning to the ACT Government.

It says that the Commonwealth had failed after nearly a decade to act on proposals for the heritage listing of Canberra, which focus on the Lake and surrounds, mainly due to opposition from the ACT Government, which did not want its development options limited.

The Trust leaves the last word to the daughter of Sir Robert Menzies, Heather Henderson, who calls the proposal ”irrational, unnecessary, and, indeed, vandalism on a grand scale”.

There is a memorial to Grenfell Rudduck in the park. He was an NCDC Assistant Commissioner who made a significant contribution to Canberra’s development. No one seems to be taking responsibility for ensuring the memorial is respected.

The Lake Burley Griffin Guardians are described here as “community activists”. Are they really anything of the sort?

Well of course West Basin looks awful – no money has been spent on it for years. It was a useful ploy to use for redevelopment. Why not a modest plan, not infill, not apartments but a beautiful park with cafes and bars and lots of trees. It is not saying no to change just not this sort of change.

The problem with not having any residences there, as part of the overall plan, is you end up with a dead (and creepy) space after dark. Residential development, combined with public walkways, jogging and cycling spaces, cafes and restaurants etc, is a balanced way of dealing with the space between the lake and the city. This was always part of the Griffins’ plan.

You could also say no money was put in because people were not using it except as a carpark a few weeks of the year.

And of course going back further money was put in by Kate Carnell who built a futsol slab there. It didn’t attract anyone.

So maybe just maybe by investing money to make it more useable might actually attract some people.

No one comes to Canberra and thinks the current West Basin is the place to be. Even though it is at the heart of the Nation’s capital. The place needs to change, National Trust wants nothing change, and do not care about the people of Canberra. They have only one mission and one mission only, which is to say no to every change without offering any real solution. If we don’t change, we don’t grow. If we don’t grow, we aren’t really living

I would have thought that whatever “heritage” the area had, both european and indigenous would have been pretty much devastated when they flooded it in the 60s. And its funny how the critically endangered golden sun moth pops up with great frequency in urban areas marked for redevelopment…

The area is wasted. No one uses it currently and it is pretty rubbish as far as parks go. Build it up and make use of the waterfront. Sunsets and some cool bars would be brilliant.

Juliet Jackman thanks for that! I’d heard it a few times and wondered!!

There are community groups in Canberra who appear to be only happy if Canberra public spaces are totally devoid of people, and things that would ever make them attractive to people.

Not true. Just don’t want all the vacant space sold off to developers by the Barr-barians. There are lots of good things that could be done with that space rather than a boardwalk, two small parks and an apartment estate like Kingston foreshore.

Mike Lawson he’s not selling “all the vacant space”. The entire waterfront will remain public space. Read the proposal rather than apply an automatic political filter to it.

Anything less than a wave pool is a fail.

It’s artificial lake, with an artificial edge, planted with introduced species, and edged with a gravel and bitumen car park. Anyone talking natural heritage needs to get a grip.

Yep, I’m sure the same type of people would have been talking about the “heritage” value of the river back in the 1960’s as to why the dam shouldn’t be built.

Apparently this part of the lake follows the river so the bank is natural. It is meant to be one of few places were that natural flow of the river still remains.

I believe there are also earless dragons, blind frogs and some other rare fauna there too.

Just and build something, it’s a desolate car park and closed down buildings.

It’s an underutilised waterfront space that has the potential to become a landmark and iconic place in the city precinct. Change is not evil. I do not understand the resistance to this project.

Brad Fraser use this approach to create Canberra ACT to keep the Canberrans spend their money within as well as attract inter-state tourist?

“The public’s right of access and accessible parking should not be a casualty” – I don’t understand why people are fighting so hard to protect car parks, it’s not an appropriate use of that space

probably some “gaurdian” in Nishi scared to of impeding their view

Agree we need to have full open and transparency. Stop Barr-baric destroying canberra for a quick buck

Well, the place is much better than it used to be. Like it or not Canberra is going to change. I’d rather get some public space improved than sit on our hands and dreams of some time that apparently was so amazing that it was 40 years ago. the world changes and so does Canberra. Canberra is not one of the best places to live in the world. If thats your idea of destroying then, maybe move to Sydney and i bet you will soon come back here.

Justin Watson, well said. Some believe they actually own this city and that they reserve the right to speak for others as well. Lived here for 30 years and am firmly of the view that the City needs a major overhaul. Hopefully, Northbourne avenue will look better than it was, even without those depressing gum trees lining the road anymore. The city should have integrated with the lake from the early days but it’s not too late. Ignore these selfish Nimby groups and just go ahead. Looking forward to the famous dictum of some “if you don’t like the place please leave”

I’m sure the NCA will appreciate being lectured by an organisation that apparently can’t tell the difference between East Basin and West Basin. 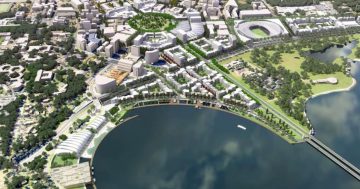 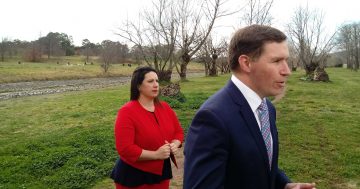