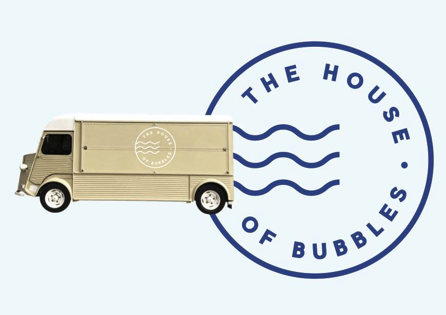 The Champagne Van is a 1971 Citroen H Van, sourced from France, full of quirky charm, fitted out to cater for all things bubbly.

The House of Bubbles celebrated that delightful drink called Champagne at a recent event at The Albert Hall, launching a new business concept: a pop-up Champagne bar which will soon be here to surround you with all things bubbly.

When the Champagne pop-up van appears around our lake (early December), you will be able to choose from a range of Australian sparkling, French sparkling and Champagne, including some lesser-known flavours of Rosé, Prosecco and Cava, plus local beers, award-winning ciders, and sparkling water.

Pamela Fizz, Founder of The House of Bubbles said that champagne has always been her favourite drink to enjoy with friends and after waiting several years for a champagne event to pop up in Canberra, she decided to create one.

“Ever since the ‘long bubbly bar’ was set up by the lake as part of Canberra’s Centenary Celebrations in 2013, I kept thinking ‘isn’t it great that Canberra is now holding activities around our beautiful lake, especially with a champagne theme? ” she said.

She wondered when the next one would be, and judging by how popular it was, she thought it would be a regular activity.

“My friends and I waited and waited and waited. We weren’t able to find informal places around the lake to catch up on a Friday afternoon, apart from coffee vans or restaurants,” Pamela exclaimed.

“I’ve always had an interest in our beautiful city and wondered why our vast lake areas were so under-utilised for such activities. Also, working in a role supporting women, I feel there is a need for locations where women can meet to catch up after work – not necessarily in a traditional bar environment – providing networking opportunities in an informal, open setting.”

Pamela’s passion for Champagne and the lack of Champagne options she was seeing on drinks lists had her ‘bubbles buddies’ regularly asking when someone was going organise a Champagne event. So an organising committee was formed and the Celebrate Champagne Day plans commenced for its inaugural event held on Friday 27 October.

The Champagne Van is a 1971 Citroen H Van, sourced from France, full of quirky charm, fitted out to cater for all things bubbly.

The Citroën H Van, Type H, H-Type or HY is a light truck (or delivery van) produced by the French car maker Citroën between 1947 and 1981. It was developed as a simple front wheel driven van after World War II. A total of 473,289 were produced in 34 years in factories in France and Belgium. Most of them were sold in France, Belgium, and the Netherlands.

The location of the van is yet to be revealed – all we know is that it will be coming in December 2017.

Will you be hanging out at the pop-up champagne bar once it is launched in December?