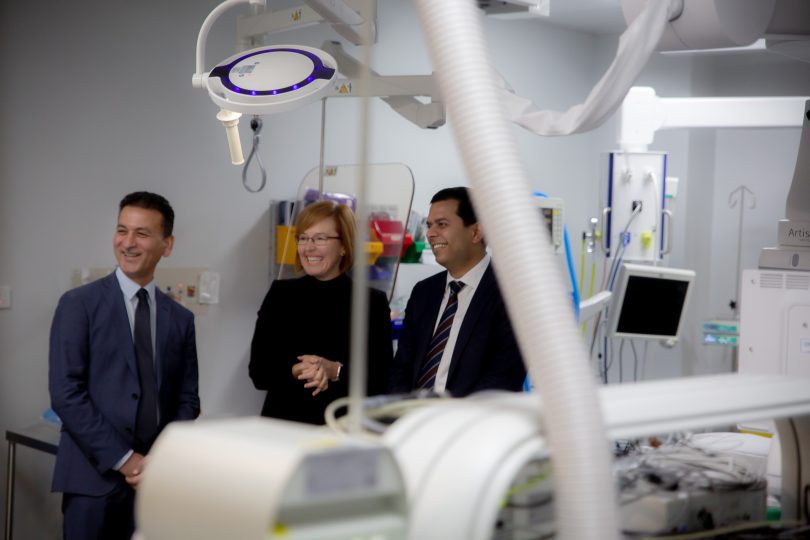 Hundreds of patients a year with heart problems will no longer need to travel interstate for life-saving treatment with the launch of a state-of-the-art service at Canberra Hospital.

Canberrans with cardiac rhythm disorders will now be able to be treated at the hospital’s new expanded cardiac electrophysiology service instead of having to go to Sydney or Melbourne.

More than two years in the making, the service has been the vision of cardiologist Dr Muayad Alasady, who convinced the ACT Government of its significance and need in Canberra, and persuaded his colleague Dr Rajeev Pathak to join him from the United States in establishing not just treatment facilities but also a research arm.

Both trained in Canberra before embarking on national and international careers, with Dr Alasady returning in 2013, and Dr Pathak leaving the University of Pennsylvania to come back to the national capital.

Dr Pathak, who is director of cardiac electrophysiology at Canberra Hospital, said returning to the hospital where he trained was like walking back into your home.

The new service will offer cardiac ablation, which scars or destroys tissue in the heart that has allowed incorrect electrical signals to cause an abnormal heartbeat, permanently correcting that ‘shortcircuit’.

Delivered through a catheter inserted in the groin, ablation involves small electrodes being placed on the heart to determine the source of the problem and the use of radio frequency energy to destroy the offending tissue.

Doctors will be able to identify the cause of abnormal rhythm and decide whether such conditions should be treated using medication, a pacemaker, an implantable cardioverter defibrillator or via surgery such as cardiac ablation – all of which can now be managed in the ACT.

Dr Pathak said the $3.1 million service would benefit 600-700 patients a year, split between those needing ablation or devices. It began last week and has already treated a half dozen patients.

The condition could be controlled with medication but there were side effects that affected patients’ quality of life, while ablation was a cure, he said.

“We have lots of patients who are currently going to Sydney and Melbourne to get this procedure done,” he said.

Dr Pathak said the patient journey from procedure to post-operative care was going to be state-of-the-art, not just the procedure itself.

Given Canberra now had the best facility in Australia, he believed patients would soon be coming from interstate for treatment.

He also said the research arm, which would involve clinical trials of new treatments, would attract national and international interest.

It would mean “international and national faculty interested in research coming to us with their fresh ideas so we will be able to expand our horizon and really do something which is beyond what Dr Alasady or I could just achieve”.

Health Minister Meegan Fitzharris said the launch of the service was an enormous moment for the provision of cardiac services in the ACT and a wonderful success story for Canberra.

“Both cardiologists originally trained as doctors in Canberra before heading interstate to complete their PhDs and abroad to hone their expertise in electrophysiology,” she said.

“I am confident that with their expertise our electrophysiology service here at Canberra Hospital will become one of the world’s best.”

ACT AMA president Dr Antonio Di Dio credited Ms Fitzharris with taking up the cause and supporting the establishment of the service.

“It’s an incredible testament to what happens when good people work together with a common goal,” he said.

“When I first approached the Minister about this issue I was amazed and delighted by the degree of interest and passion.”

Dr Di Dio said Canberra could have lost two extraordinarily trained doctors forever had it not been for some ‘unbelievably hard work behind the scenes, by a lot of people’.

Patsy is this good for you? :-) for a moment i thought they were going to say they were bringing pediatric cardiac docs/surgeons to canberra. So still going to westmead next week lol

I'll go to Sydney thanks. Best care, beautiful caring nurses, not treated like a number, best heart surgeon's. Canberra hospital has a lot to improve upon given my numerous encounters with their care and practices. Anthony O'Hara

Sorry you had a bad experience Anthony, I spent 10 days there a year ago for what should have been a simple, although major surgery that turned into a major heart problem where I could have died and they saved my life, looking after me superbly in the process, could not fault anything, doctors, surgeons, nurses, food, not a thing. I owe them my life, my heart and my leg.

Louise Earl - 51 minutes ago
I love Canberra … but yes.. Canberra has missed the boat on a lot over a lot of years! Not just AFL. View
Matt Bacher - 5 hours ago
Michael Bourke …..as you and I can attest to mate 🤣 View
News 156