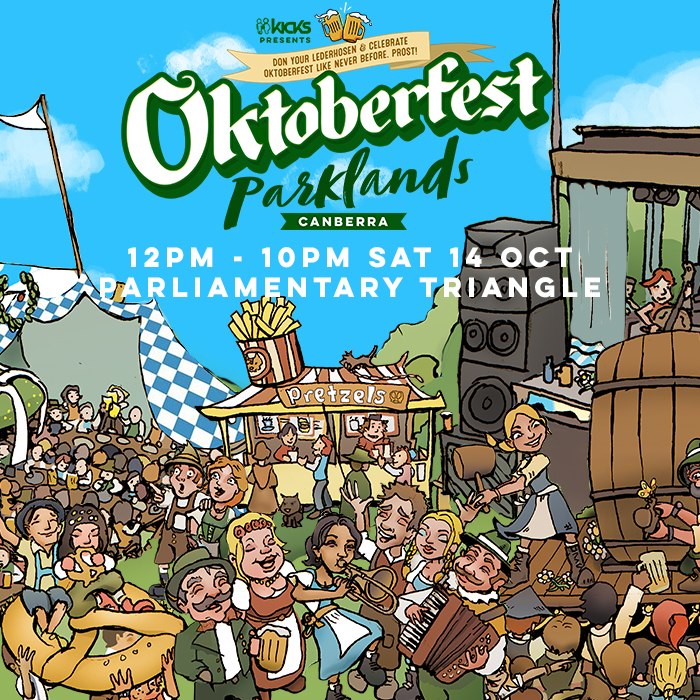 Canberra’s new Oktoberfest event is all set to get the dancing and beer-drinking going at Patrick White Lawns on the shores of Lake Burley Griffin on Saturday, October 14.

Tickets are on sale for ‘Oktoberfest Parklands’ which is being put together by Kicks Entertainment who are promising to bring a “huge stein of Bavarian tradition to Canberra like it’s never been done before!”

“Think Kranski, pork knuckles, pretzels and steins of beer (plus German wines and other drinks of course), all while singing a German Oompahpah in a huge Beer Hall and across the beautiful waterside parklands just minutes from Civic.”

You have to be over 18 to attend the event, which runs from midday to 10 pm on October 14.

Tickets are on sale through Moshtix (click here) and provide you with entry to the event, wunderbar entertainment, a commemorative Oktoberfest Parklands Beer Stein and your first drink.

The organisers advise that this is an event where you should definitely dress up. Women are advised to go with the classic colourful Bavarian Dirndl dress complete with matching apron – or alternatively to don a female Lederhosen.

Men are advised to go with a Lederhosen, Platterhosen, or a plaid shirt. Important accessories include a felted hat and suspenders.

Full details about Oktoberfest Parklands can be found at: http://oktoberfestparklands.com.au/

Not one but two local Oktoberfest celebrations

If one Oktoberfest event is not enough then the good news is that there’s two on this year!

The Harmonie German Club has been holding Oktoberfest festivals for Canberrans since 1962 and will be running their annual event at The Queanbeyan Showgrounds this year from Friday, October 27 to Sunday, October 29.

Organisers of Oktoberfest Canberra say they needed to move locations because the fees to use their former home at Exhibition Park had increased dramatically.

The Harmonie German Club says that this year’s Bavarian festival will be their biggest and most entertainment-packed weekend ever.

“We still have all the amazing German foods, fully-imported crafted beers and wine, traditional music, German dancers and bell-ringers but we have added in a beer garden, new shows, exciting competitions, Sunday Family Day and markets, free amusement rides and more,” say the organisers.

For more information and to buy tickets please go to: http://www.oktoberfestcbr.com.au

Arlene Smith - 55 minutes ago
Kathleen Mary Smith Erin Winter in adventure park? View
Bridget Trussler - 2 hours ago
My son many years ago went head into the pole. Please get rid of it before someone is killed...... View
Claire Anderson - 3 hours ago
Daniel, the newer ones really do stop way WAY more abruptly. I too rode the old ones with help of people pulling and never go... View
News 13

jorie1 - 2 hours ago
Hi Assiduous, I do agree that $500 per week is a lot of money - but the majority of that money goes to the ACT government in... View
assiduous - 3 hours ago
$500 per week is not low - it is enough to build a modest detached family home every 10 years. It is a reflection of Australi... View
Peter Jovanovic - 5 hours ago
So if it all gets too hard for the parasitic landlords and their parasitism isn't as lucrative as they hoped they'll just dem... View
News 39

kenbehrens - 3 hours ago
Alicia Payne, I guess it comes down to the priorities of the ACT Government. If the Government is so concerned about health,... View
News 42

@the_riotact @The_RiotACT
Bored with your usual #dining options? Why not try #Ethiopian? There's a reason Ethiopian Down Under is Pearce is a beloved #institution. Let Michelle Taylor guide you on this culinary adventure https://t.co/UZL0Yvgkar (50 minutes ago)