New sign on the Tuggeranong Parkway (nth bound b4 woden) 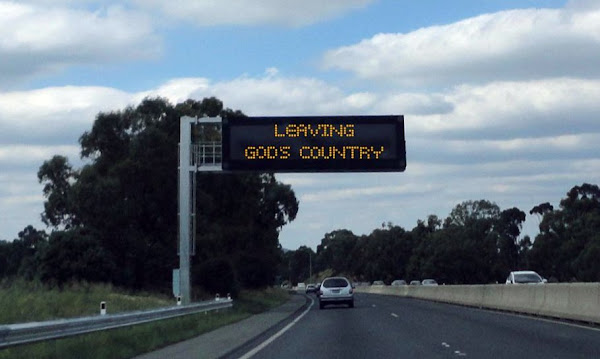 This brightness of this sign is really dangerous. Driving up the parkway on a foggy morning visibility was reduced to zero. It is the equivalent of using highbeams in fog.

Has anyone else seen how bright these things are? The writing’s actually a bluish white light and in a dark sky is almost blinding.

Someone forgot to include a dimmer switch.

HOLY SHIRTS IS IS BRIGHT! The inside of my windscreen was dirty and as I drove paste I could not see anything, turn it down I am not blind!

$2.4 million on ‘big city’ signs, its a disgusting waste of money. How about $2.4 million into mental health care or something worthwhile?

This morning it says:

Has anyone else seen how bright these things are? The writing’s actually a bluish white light and in a dark sky is almost blinding..

I found when you drive near it with your eyes wide open (difficult to do), its more of like a light-at-the-end-of-the-tunnel feel to it, coming out the other side I was blinded by it as it took my eyes a few seconds to adjust to seeing anything again. These things arent just a nuisance and waste of money, theyre downright dangerous.

The thing is lit up at the moment 24 hrs with warnings about the double demerits – I wondered what the bright glow in such a dark area of the parkway was driving south – Deckard is right it could be a beacon for the aliens if they wanted!

Has anyone else seen how bright these things are? The writing’s actually a bluish white light and in a dark sky is almost blinding.

Someone forgot to include a dimmer switch.

Just our Gvmt showing again an unrivalled ability to squander our money. So what’s new?

Piss off, another blue blooded conservative who doesn’t believe in spending our taxes, only saving it for a rainy day.

Who cares about infrastructure etc?

You people make me sick

Maybe you could go to one of those wonderful progressive countries where noone cares to watch government spending, then, and enjoy your being sick there.

(Let us know how it works out for you)

Just our Gvmt showing again an unrivalled ability to squander our money. So what’s new?

Piss off, another blue blooded conservative who doesn’t believe in spending our taxes, only saving it for a rainy day.

Who cares about infrastructure etc?

You people make me sick

Speaking of signs on the parkway, the skiing kangaroo sign is in need of repair. His skis are coming off, and someone has put a white and black sticker on the bottom of the sign.

I maintain that that roo is the best piece of public artwork our roads have.

The Hitchhiker’s Guide to the Galaxy is a wholly remarkable book. More popular, certainly more successful than the Celestial Home Care Omnibus, better selling than Fifty-Three More Things to do in Zero Gravity, and more controversial than Oolon Colluphid’s trilogy of philosophical blockbusters Where God Went Wrong, Some More of God’s Greatest Mistakes and Who is this God Person Anyway?

Why not cut out the middle man and just use the @ACTPol_Traffic feed instead?

Better yet, have it display any tweet with a #bigsignontheparkway hashtag. We could call it a public art installation.

Why not cut out the middle man and just use the @ACTPol_Traffic feed instead?

Talk n text u b next

Safe speeding there’s no such thing

What else would they put there?

Why spend 2.4m of our taxes (when the budget is already very tight) on building an electronic sign that is most likely only going to repeat the messages that are already available on fixed signage?

There’s a pearler on Ginninderra Drive: “PEOPLE DIE ON ACT ROADS”. I’ve often wondered what that message is trying to achieve.

I agree with your point though, it would have been far cheaper to erect a billboard that says “accident/heavy traffic, expect delays” – which is what these electronic signs will be bleating most of the time.

Speaking of signs on the parkway, the skiing kangaroo sign is in need of repair. His skis are coming off, and someone has put a white and black sticker on the bottom of the sign.

When did Kambah become God’s Country??

What do you mean by “When”? If you’ve got to ask, it’s probably not for you.

When did Kambah become God’s Country??

The problem was they needed these signs when the majority of the Glenloch interchange work was going on. Maybe variable speed limit signs although i doubt it, they don’t look like theones used in sydney. Probably event information only for things like car parking and access.

We really need faster or variable speed limit signs on the parkway. I’m sick of hearing from the ultra conservative about people speeding on the road. It really is good enough for a 110 limit. And the 3 accidents i’ve seen and one I was in, generally involved slow moving traffic changing lanes or merging. Once a person came to a complete halt on an entrance way onto the 100km/h parkway.
Caused a 4 car accident and I bet the person who stopped copped none of the blame.

Sue McIntosh - 9 hours ago
Angela Moore thank you for this beautiful poem. View
Angela Moore - 9 hours ago
"The Poplars" The Poplars are fell'd, farewell to the shade And the whispering sound of the cool colonnade. The winds play no... View
Sue McIntosh - 14 hours ago
Ho hum, what else is new? More trees given the chop. If council is so worried about the trees falling, then they should be re... View
News 9