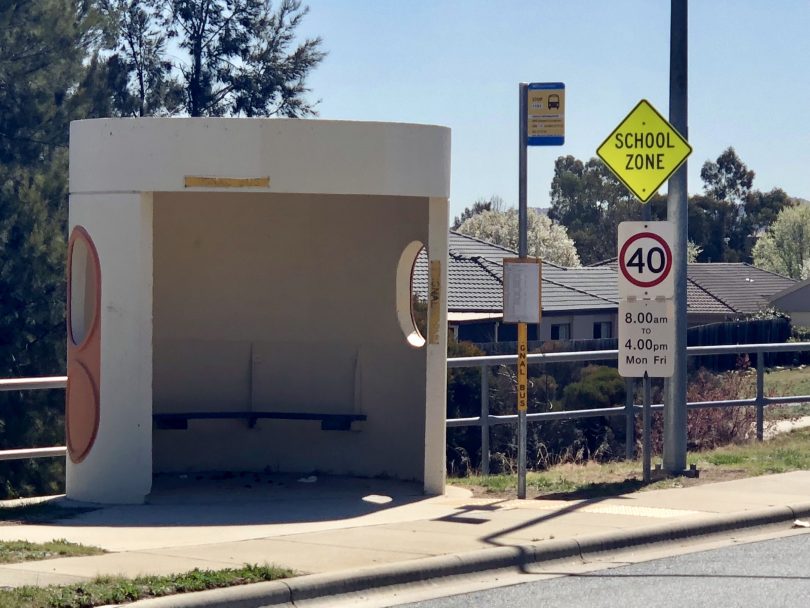 It seems that fewer women are taking the bus since the new bus network was introduced. File photo.

Mum of two Sandra Wiens said the reason she stopped taking the bus was due to her feeling unsafe walking to and from the bus stop, and Women’s Centre for Health Matters said she is not the only woman who feels this way.

Under the new public transport network, Ms Weins’ usual bus stop along her street in Bruce was removed from the network in exchange for Rapid Route Four. To get to the stop, Ms Wiens is required to walk through a dimly lit park.

“It used to be a quick and easy walk to go to the bus stop,” she shared with Region Media. “With the change in the network, my bus route was taken out altogether so now I need to head to a Rapid bus stop, which is a much longer walk that takes me through a park which is quite dark.

“As a woman, I would not go there at night. I once took my kids to the stop during dusk and they said ‘mummy, this is scary’. It was quite scary because it is dark, you are alone, there is no line of sight in the park. It might be fine during the day, but at night it is not.

Ms Wiens said she no longer takes the bus and will now drive her car to and from work, one of many women making the decision to hop off the network.

Women’s Centre for Health Matters CEO Marcia Williams said the centre kept hearing from individual women about how the new bus network had affected them, so they decided to conduct a survey to find out how the changes have affected women and their sense of security.

“We started to realise that this isn’t just a few women and that this is more widespread,” Ms Williams shared. “So we launched the survey to see how many women didn’t feel safe and to see if there are particular stops or if it is across Canberra.

“Quite a few women are telling us that they aren’t catching buses anymore because they don’t feel safe at and walking to their bus stop. It’s not the bus itself or the change in route, its the bus stop and having to navigate from that new bus stop to home.”

Ms Williams said there are several public transport stops that have been raised as a concern by a number of women, including the Philip Avenue light rail stop.

“We know that a woman’s perception of safety will stop them from using places or spaces,” she said. “For women, it’s about the perception of safety, so even though the bus stop seems safe to Transport Canberra, women will not use it if they don’t feel safe.

“Once the survey is finished, we will be able to map if there are particular bus stops and what the issues are.”

To fill out the survey before it closes on 14 September, click here.

has OP not heard of a battery operated torch? solves the darkness problem.
reality check – we live n one of the safest countries in the world

Living in one of the safest countries in the world didn’t save Eurydice Dixon. It didn’t prevent my car from being broken into while I was at dinner in Canberra. It didn’t stop my friends from being robbed while they were going for a walk at dusk in Tuggeranong. We don’t live in a crime-free society.

Also, the discourse around women and safety is mostly that women need to be aware of their surroundings and avoid becoming a target. It’s not fair to call her irrational for heeding that advice.

Safety has been sacrificed.

The new timetable is ridiculously inept

I am having to either catch 6 Buses 2 trams to get my special needs son to his weekly Dr Apt. At the Canberra HOSPITAL and return. It adds over an extra hr plus to travel. It’s a nightmare.

Anyone get the feeling that the government didn’t think through the broader implications of removing over 700 bus stops across Canberra?

The survey only allows answers that respond to feeling unsafe.

Yes it’s very poorly constructed. You can’t give any examples of what actually does work!

Not sure transport network is the issue here though

Exactly my point, women should feel safe everywhere, not just walking to a close by, well lit bus stop

Please erect some lights at the R2 route Fyshwick to Fraser stop after Chewings street and before Ross Smith
It’s very dark and unsafe.

Erica Rushton and the 1.7km walk home over Goodwin Hill.

Yes this hub and spoke model has removed many routes that went from major interchanges via some suburbs. Now we have to wait much longer if we life outside the spoke area in another region. I’d rather be on a long bus ride via the suburbs than waiting longer out in the winter chill with smokers and loiterers. Bring back the Gungahlin-Crace-Belco bus route!!!

This seems to be a subset of the general lack of lighting on paths at the moment. A lot of the lights on pathways seem to have been out for ages, no matter how often you report them on fix my street, or are those sensor ones that go out before you are past them, so you go from light to dark and don’t have time adjust.

LJ Tas Around me its a recent phenomenon, entire pathways and parks have gone dark in the past year or so, including the ones to the local shops. This is out in Tuggers.

Tracy Houston they’re not sensor lights. The lamps that turn on and off periodically are broken (the repeated on /off cycle is the failure mode of Sodium-vapour discharge lamps. https://en.m.wikipedia.org/wiki/Sodium-vapor_lamp

ACT election is next year

How are the Liberals going to make this better. I wouldn’t vote on rhetoric and no details

Doesn’t matter how many surveys you take and how much you voice concern, they won’t do anything about it sadly. There were MANY MANY people who told them about all the changes that were terrible and HOW they were terrible and they put them in anyways, and even though there have been TONS of complaints, they haven’t done anything but take even more away (weekends anyone?). But it’s ok because according to them, we’re better connected.

totally agree with you. And they said the new network is for weekend better and now, from 22 of September they will back to previous weekend timetable. So, nothing valuable of the new timetable.

Jen Roberts they haven’t done anything in a long long time. ACT election is next year