Nightmare on Lake Burley Griffin: Get ready to run for your life 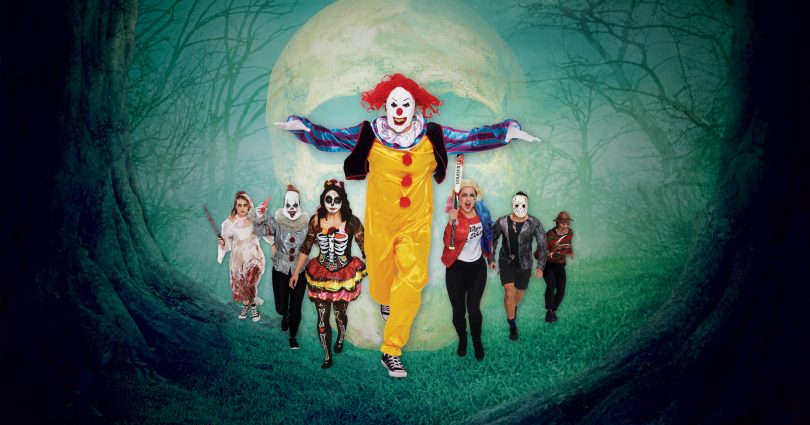 Does a run around Lake Burley Griffin with killer clowns chasing you with knives sound fun? Images supplied by Running Scared.

A horde of 20 clowns jump out from behind trees and start chasing you around Lake Burley Griffin, as your blood-curdling screams fill the night air.

While this might be a premise for a terrible nightmare for most, some believe this heart-racing experience is the perfect way to celebrate Halloween.

So for the first time ever, a section of Lake Burley Griffin will transform for one night into a terror course with dangers and jump scares lurking at every turn.

The “horror fun run”, aptly called Running Scared, will start at Stirling Park in Yarralumla and finish in Rond Terrace, with thousands of people donned in Halloween costumes hoping to be scared by chilling characters.

Paul Kind, the main man behind the event, said participants can take as long as they need to run the five-kilometre, dimly lit track but the adrenaline rush from being scared might put wings on their feet.

“While there will be activities along the whole five kilometres, there will be around a dozen hubs that will have particular themes,” he detailed. “The hubs will be focused on a particular genre of horror, like a section dedicated to clowns, a section of chainsaws and other things that people associate with the horror genre and Halloween.” 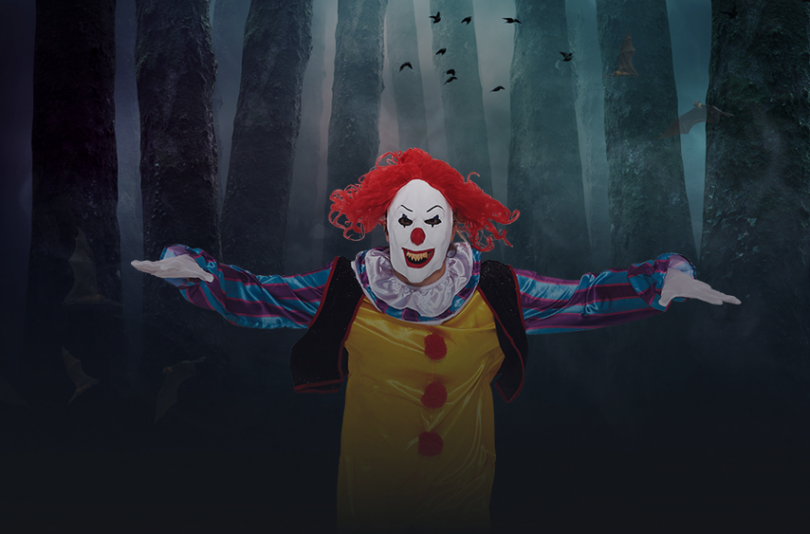 Clowns will feature in one of a dozen hubs at the run.

The course will be littered with an array of human and animatronic props, with drama students dressed up to send a shiver down the spine while moving props as large as six feet will scare your socks off.

Mr Kind said having the participants also dressed up in horrifying outfits will only add to the spectacle.

“Thousands of people running together in Halloween costumes will create its own atmosphere,” he said. “The people who are participating are part of the theatre of it and that is what we would like to see.”

Mr Kind said that they decided to stage the first event in Canberra, believing the nation’s capital was the “right market” for the run. 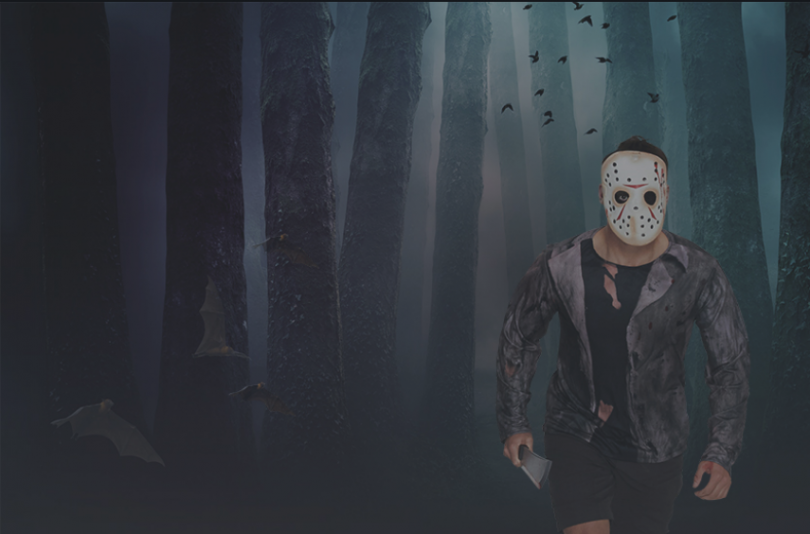 A quirky way to celebrate Halloween!

“There is also a global trend around fun runs and theme runs so we decided to combine Halloween with a theme run.”

Mr Kind was adamant that the run is not just a Halloween gimmick and their intention is to send you and your nerves home in a frazzled mess.

“We are really going to scare you!”

If you make it through the run alive, join in the Monster Dance party featuring DJs, Halloween bar and food trucks at Rond Terrace.

Will you survive the night? Buy your tickets here, grab a team of friends, don your best costume and get ready to run for your life!

The map of the run.

Jake Nelson we should go

Kate Mateer I bought us tickets to this instead of the theatre. Thought it was more up your ally. Would you agree Tom Mateer 🤡👻👹🤡

Tracey Mateer you’re hilarious. Too bad you wasted your money 😅

Sarah Cullen let’s do it 😂

Kyle Van Den Berg you in???

We will go next year hahaha Blake Edgar surety you’ll be in!

Kyle Van Den Berg I’m sure I can dig up a VR video of not so long ago.

Katja Myburgh if you want me to die then sure

we will die together

Cmonnnn you said you wanted an adventure 😉

Kristen Downes you up for this?

Katja Myburgh fine I am there, only because I am the rebellious one 😉

YESSS WE ARE GOING

Kristen Downes pfft please 😂 *won’t go to Bali with us 😂

Daniel Clink I reckon I could do it…

Madi Willett then let’s do it

Locklyn this screams you

Kayla Riley I’m half tempted! Would be kinda fun? 😂😂 we would just scare ourself!

Robyn Lewis It is! My heart rate is up already reading this from bed. That’ll do.

Pamela Cindy for you and Yani?

My heart is already racing 🤭

We’ll dress up and run! Lol that seems kinda fun

Leonora lucky for you i have no scary costumes 🙁

Indira Devkota have you seen this?

Emma Moore i have now! I got chills just imagining myself being chased by clowns!

Katrina Hladun – do you think this will be scarier than that lame other thing you went to?

Not sure Rebecca Seale, it’ll also be daylight savings so still some daylight. I’m considering.

Vanessa Pryde look what is chasing you…

Mary Kouparitsas that scares me!

That looks like so much fun but I’ve got a wedding in Gundaroo that day. Adam Gregory – looks like fun 🙌🙌

Anna, this seems right up your alley…

Kayla McIntosh Kelsey Ogilvie this is what u guys should do!

Cathie Smith I was just saying to josh I wanted to but I’m away this date!

I think you would enjoy this one Rebecca. It’ll be just like the laser tag game 😜.
Priscilla Panatda Marty Ryan Ignacio Theo

Diana D Beban seems like something you would enjoy

Neita Skillin 😂😂😂
I would probably have a heart attack

Diana D Beban 😂😂 me too don’t worry, as soon as a clown jumped out I’d be done!

Christopher Kalachoff we should do this!

Emma you would love this!

Courtney Leach omg i wish i was there! lol

Come visit Melisnd! It will be so much fun!

I’ll do it if you’re here to hold my hand Melisnd! Courtney

Georgia Adamson lets do it?

Amanda Kate if only we lived in ACT! this looks fun!

I will walk…. unless the clowns are real serial killers…… then there’s gunna be some serious throat punches going off.😂😂😂

Destiney Salter and Georgina Said we should get tickets?

David Jongue, we would both have heart attacks

Bradley Hyland no no no

Greer Wilson good one for ur resume

Elizabeth… you doing this? 🎈

Amanda Lee that’s a unique wedding idea for you

Bahahaha we’d be so fast 🏃🏼‍♀️

anything to get those steps up! 😂

Abby Natali I know how much we love a good dress up? 💁🏼‍♀️

Karlie Turner the clowns was our best look 🤔

Eleanor something to spice up our lives

Renee you should start going to bootcamp training

Ben White PT How can you say no to Clele R B White? 😁

Ros Obers actual footage of me at Halloween Horrors

Clele R B White for sure! Ben needs someone to help get you off the ground when you get freaked out!!!

Nathan Cawley odds you stroll through this?

Courtney Ingold!! Do it. Hahaha

Julie Field – thought of you

Melissa Sims you would also love this 😂

Oda Baessler Cate Pearce omg u ladies can incorporate this into your early morning walks!1!

Dina are you doing this?

Lachie James the only way to get me to run

Brianna you should do this 🙀💜

Leandro Lopii do this with meeeeee??????

Tanyel Salise for yout birthday but with Camelbacks filled with vodka

Madeleine Lancini come to Canberra and do this with me lol

Kim Durey Breakwell not at all, neither are you 😂😂

I can feel the back sweat just reading this article

Omg, Joanna – can we please do it!

Alinta Etherton-Kirke arghh, we’re away that weekend! Looks hilarious though 😂😱

it would definitely make us run!

Carolyn Dekantios when you were cool you would have done this!

Sarah Holmes lets do this!

Should we? Leanne Webb Shana Bell

James Broekhuyse nathan told me to tag u!

Dean Harris omg we should go you would love it

Alana Walker ok like seriously can we do this

Shelley Campton reckon your lot might be into this?!!!

Alex Colrain that’s a hard no…

Harrison time to get fit?!

Emily Patterson do you want to do it together?!

Vanessa Emily what about this one? 😂