As I write, the first of the estimated 260,000 or so people who will head to Canberra’s biggest public event this weekend are about to purchase their first world food snacks and gather around the stages set up all around the city to watch it come alive with culture. We have some suggestions to help you get the most out of what is a spectacular combination of world food, music and dance in the heart of our city from 4pm Friday till 6pm Sunday.

Got tips of your own? Let us know in the comments below. 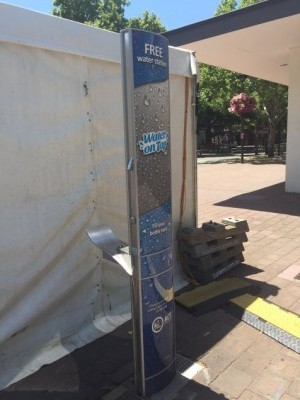 1. Bring a water bottle and refill it often

It’s going to be hot all weekend, and eating street food while you walk is thirsty work. Avoid the temptation to drink too much beer, wine, sangria or sugary soft drink in the sun by bringing a water bottle each and refilling it regularly at one of the six free water stations around the city. These are opposite the merry-go-round on City Walk, in Garema Place and Ainslie Place, at the intersection of Petrie Plaza and Bunda Street and in the bus station (one on Alinga Street and another on Mort Street).

2. Get in early to avoid the crowds and heat

The best time to visit the food stalls is Saturday morning, between say 10am and noon. It’s not too hot yet, no one has had time to get drunk and disorderly, the queues are shorter, but all the stalls are up and running. You can collect your meals and settle in in front of one of the various stages to watch the cultural performances unfold. Sunday morning is another options, but not all the stallholders stick around for the final day.

3. Plan your trip given bus station and car park closures

The city bus station is closed all weekend with usual routes arriving and departing from temporary platforms. There is an information tent on the corner of Northbourne and Alinga streets to help you find your bus and get information about special $5 night rider services. Pick up the turquoise National Multicultural Festival 2016 brochure for all the details. There are extra 900 and 950 services running all weekend to bring people to and from the city, with park and ride facilities available along those routes.

In terms of parking, the Canberra Centre carparks may be the best option. The carpark opposite Mooseheads is closed to house the Fringe Festival, putting more pressure on carparks surrounding it.
Consider cycling in, but again, remember to stay hydrated.

4. Wear a hat and use sunscreen

You can always nip into the shops to buy a hat if you forget and your skin will thank you later. St John Ambulance will have sunscreen for those who’ve forgotten or need a top up on their stall, which is also where you should head if anyone grazes a knee or looks to be in danger of sunstroke.

5. Ditch the prams and strap babies on instead

It’s tough to push a pram around in a crowd of 100,000 hungry people, especially when half of them are in one of several hundred queues for food.

6. Pack some wipes or napkins

Sticky fingers are inevitable for festival-goers of all ages. Consider bringing baby wipes or wet facecloths and a plastic bag to take them home in even if you don’t have little kids.

7. Pick a meeting spot on arrival

Choose a shady spot with room to sit down and agree to meet there if you get separated. Write your mobile number on the arms of children who have the potential to wander off.

If you’re near the Canberra Centre, their toilets will provide a break from the heat as well as parents’ room facilities.

You could grab an orange juice in McDonald’s and use their toilets, though these are closed between 10pm and 6am.

The temporary toilets for the festival are set up on Akuna Street, London Circuit, Mort Street and at the back of the carpark opposite Mooseheads set up to house the Fringe festival.

For culture, check out the Pacific Island showcase, the Belly Dance showcase or performers from Azerbaijan, Thailand, Serbia, Wales or Bangladesh. The full program is online here.

For food, experiment with cuisine you’re not familiar with, and try to choose dishes that you won’t eat at other times during the year. Chips on a stick look very tempting, but they’re probably the least multicultural fare on offer. Save them for later in the month at the Canberra Show and go for a dumpling, gozleme, satay stick, serve of daal, crepe or pupusa. See a list of all the stalls here.

I love the festival but I decided not to go this year because of the heat and expected crowds. Did I make the wrong decision? Did anyone go that can provide some feedback on this year’s event?

I went on Saturday around midday and the atmosphere was fantastic. It was hot, yes. The crowds made it slow going walking around, but there were no issues with queues. We had some great food and the kids learnt a lot about different countries as we explored the stalls. My pick of the performances was the Inca band with panpipes just outside the Canberra Centre (which was very handy to escape into from the heat).

Ashley Wright - 36 minutes ago
Josh Shirley and when did you buy this property and how much equity did you have when you brought? View
Ashley Wright - 40 minutes ago
Candace Driscoll they never make more than market value of the property. Whilst rent is based on a percentage of income of al... View
Josh Shirley - 4 hours ago
I had a 3 bedroom 2 bathroom townhouse in Melbourne 30mins from the city and the mortgage was $200 a week cheaper than any re... View
Lifestyle 18