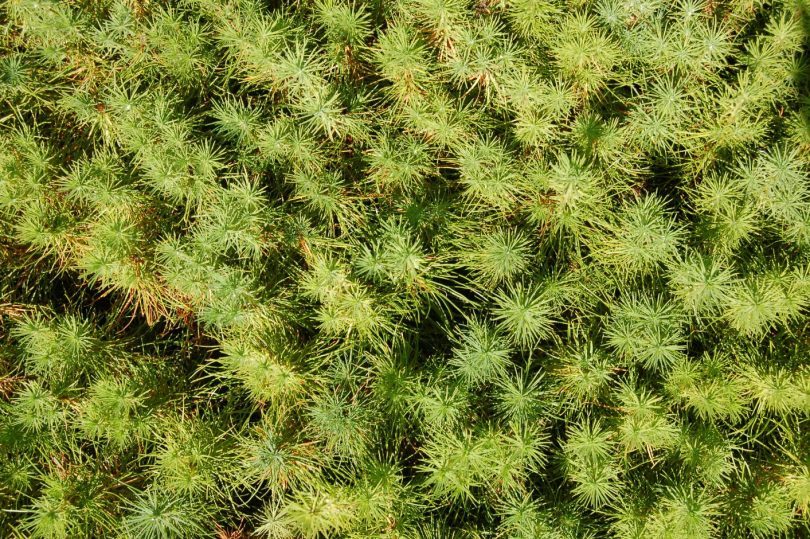 Nine million seeds have now been planted at the Blowering nursery, eventually growing into seedlings to be dispatched to softwood plantations. Photo: Forestry Corporation of NSW.

Nothing says it’s been a big year like planting your nine-millionth seed.

The Blowering Nursery at Tumut has done just that, their nine-millionth pine seed for the year has just been put in a pot as part of the annual six-week sowing program.

This is the start of a journey that will see that seed become a seedling that the nursery will dispatch in eight to eleven months to any number of the pine plantations that cover several thousand hectares of New South Wales.

NSW’s largest radiata pine seedling production nursery employs a casual workforce of 13 staff who sow around 250,000 seeds a day, six days a week, throughout the course of the sowing period.

Strategy and Risk Manager with the Forestry Corporation of NSW, Gavin Jeffries says the nursery is a crucial component of the Corporation’s operations.

“Wood is the ultimate renewable resource, our forests are regrown or replanted to continue the forest cycle into the future,” Mr Jeffries said.

“We’ve dispatched more than 133 million seedlings from Blowering Nursery over the last 19 years which will ultimately help build people’s homes and vital infrastructure.

“Over the past winter alone we planted almost nine million seedlings across more than 8,250 hectares of state-owned plantations.

“This is roughly the equivalent of 17,000 football fields, and 7.3 million of those seedlings were grown right here in Tumut.”

Over the coming 10 months, the crop will be carefully hand-weeded, fertilised, nurtured and watered to produce seedlings in time for planting over June to August.

“In around May next year, we expect a crop of more than seven million high-quality seedlings to be ready to leave Blowering Nursery to re-establish plantations around NSW,” Mr Jeffries says.

“These seedlings will be used to re-establish the state-owned pine plantations that have been or are currently being harvested.

“This includes plantations near Bathurst, Lithgow, Oberon, Tumbarumba, Bombala, Orange, Walcha and Tumut, where the seedlings will be hand-planted over the 2019 winter.

“In addition to the crop at Blowering, we are producing seedlings from our other production nursery in Grafton and we will draw the rest of our supply requirement from private nurseries under contract.”

Forestry Corporation is Australia’s largest producer of plantation-grown radiata pine, managing more than 200,000 hectares of plantations around the state and producing more than 3.5 million tonnes of timber each year. This is enough to construct around a quarter of all houses built in Australia each year.

Mechanism Of Action - 46 minutes ago
Nugget Harris as they should be View
Silentforce - 10 hours ago
Another solution would be to enforce pedestrian laws (if any in the ACT). Working in Civic, each day I witness jay-walking, c... View
Tāmati Kentwell - 10 hours ago
Hugh Gregory most income based schemes like this take into account number of dependents View
Community 43