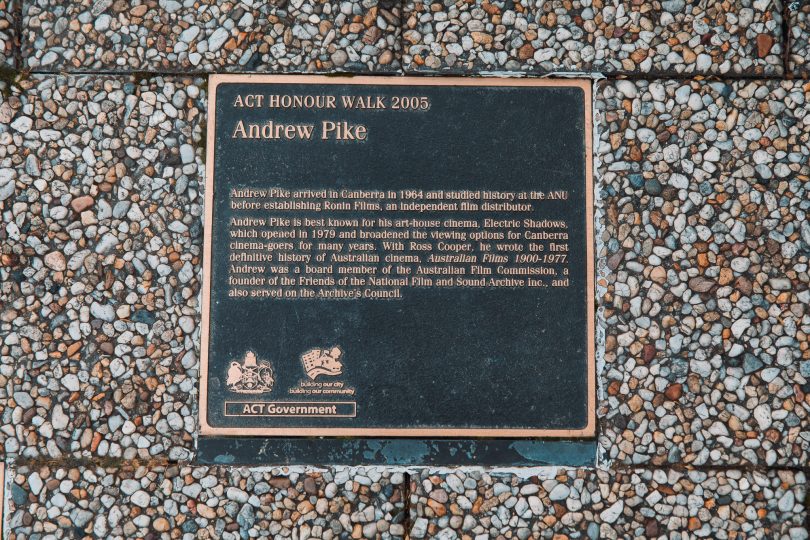 Not far from the Canberra Centre, between London Circuit and The Canberra Times fountain, lies an impressive collection of pavement plaques honouring people who have helped shape the nation’s capital as we know it today.

In the first of a series on those commemorated in the ACT Honour Walk, The RiotACT is paying tribute to many of the more than 50 individuals, families and organisations who make up the walk, with a collection of stories and biographies compiled by our writers.

Belinda Cranston compiled this report on film entrepreneur Andrew Pike OAM, who made the list in 2005.

I first came across Andrew at a workshop run by Screen ACT for people in the education sector. It was early 2013, and the Canberra-based film distributor, historian and documentary producer didn’t mince his words as a discussion on the rise of social media took place.

The founder of Canberra’s long-running Electric Shadows, which screened its first film in 1979 and its last in 2006, was of the view that films were best appreciated when watched on the big screen. And that platforms like YouTube were a blight on the industry.

His voice quavered and his face reddened as he made his point – so it was with hesitation that I revealed I had purchased a film distributed by another company he co-established, Ronin films, courtesy of a trailer I had watched on YouTube.

He thanked me for doing so, and the conversation went no further.

Eighteen months later, Andrew and I were both at the opening of a photographic exhibition at the Australian National University’s new Australian Centre for China in the World building. I recognised him as the man who didn’t think much of on-the-run YouTube and Facebook clips. Then a remark by a man standing next to me got my attention.

“See that man,” he said to me while nodding in Andrew’s direction. “He’s the guy who got Strictly Ballroom off the ground.”

Curious to know more, I eventually invited Andrew to be a guest speaker at an event I was involved with in early 2017. He was receptive to the invitation, and a colleague and I met with him beforehand, to make a short promotional film ahead of his talk. Asked about Strictly Ballroom, Andrew gave a measured explanation as to why he supported and distributed the film.

“The producers of Strictly Ballroom had been all around the world to places like Cannes and other markets, looking for backers,” the Order of Australia (OAM) recipient explained.

“And they basically had doors closed on them.

“In the end they drove three hours down the Hume Highway, from Sydney to Canberra.

“And gave us their pitch. By that stage they had perfected the pitch. It was one of the best I heard in my career. I felt immediately, if I could get their enthusiasm across to the audience, it would all work extremely well.”

Aside from a young Paul Mercurio striking a chord with female viewers of all ages as its dashing lead dancer, Strictly Ballroom went on to win awards all over the world and become an essential inclusion in DVD collections.

Other standout films backed by Ronin Films include Shine, Road to Nhill and Message from Mungo.

Now Andrew is involved with the production of a film that could revolutionise the advice GPs and surgeons give patients undergoing heart surgery. 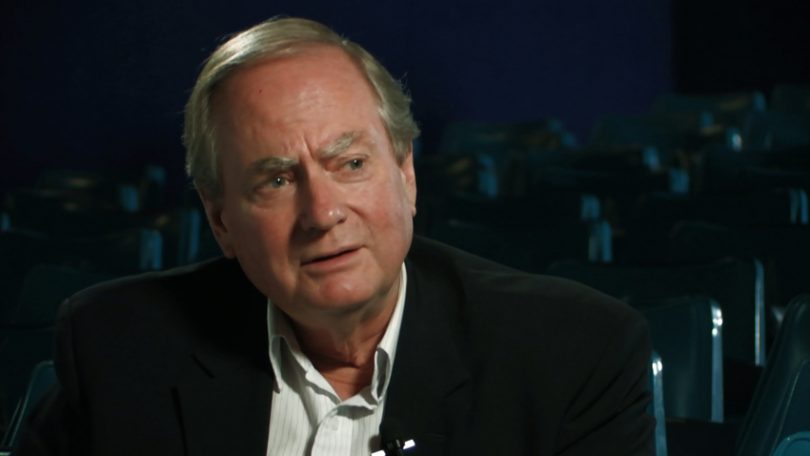 Andrew was 67-years-old when he underwent heart surgery. Such was the success of the operation, his surgeon told him he would see him 20 years later, as he didn’t foresee the now medically fit patient in front of him needing further treatment for at least another two decades.

But while it was a remarkably quick physical recovery, Andrew’s psychological health was anything but sound.

“We are getting longer lives,” he told me over coffee on a wintery day in Canberra’s north in May this year.

“But to achieve that, medical science is using invasive surgery that has a long-term effect on the mental health of the person who gets the longer life.

“And what we are not doing is looking at the quality of those extra years that medical science is giving us.”

In Andrew’s case, nightmares, panic attacks and a general sense of disorientation formed the bane of his new existence.

“I ticked all the boxes and still do, in terms of cardiac health,” he explains.

“But what I wasn’t prepared for, was the psychological and emotional after-effects of draconian surgery of this kind.”

Andrew was told by his cardiologist and GP that his response to the surgery was perfectly normal and that the negative side effects would soon subside. But they went on for longer than he could bear, and attempts at telling himself to toughen up didn’t help.

A Google search on trauma following heart surgery led to Andrew discovering the ‘Pumphead syndrome,’ a colloquial term used by some medical professionals, to refer to the intense emotional experiences of many patients who undergo open-heart surgery.

While some describe the phenomenon as a form of post-traumatic stress disorder, Andrew believes that is much too vague a term, and would like to see a specialised approach to the problem.

His latest film production project, Pumphead, Living with Modern Miracles, is a documentary motivated by a concern over the lack of literature and information available to people who find themselves struggling with the psychological trauma of having their chest ripped open.

As Andrew has discovered, out of 660 Australian cardiac rehabilitation programs run by hospitals and health centres for people recovering from heart surgery, ‘very few deal with this problem in a substantial way.’

Thoroughly researched and including case studies ranging from relatively young people to those travelling through late middle age and beyond, Andrew hopes the Pumphead-themed film will facilitate an awareness of the problem among general practitioners, their patients and others.

Interestingly, he says academics made a connection between open heart surgery and psychological issues some 50 years ago, when the procedure was in its infancy.

“In 1967 an academic research article discussed the syndrome,” he said.

“So pretty much from the beginning of open heart surgery being performed, psychologists were picking up the problem.”

But many patients and their carers remain uninformed, and at the very least, Andrew believes GPs should be making printed literature available to them.

He is aware of valuable research under way at the Australian Centre for Heart Health, at the Royal Melbourne Hospital, and is quietly hopeful his latest project will help fast-track the opening of clinics specifically designed to help people experiencing the Pumphead syndrome.

As far as Andrew is aware, such clinics do not exist anywhere in the world, so the prospect of Australia paving the way in this regard is enormously exciting.

In the meantime, Andrew is looking for more people to come on board in terms of funding his Pumphead film. To support the project, tax deductible donations may be made at https://www.documentaryaustralia.com.au/films/818/pumphead

Julie Maynard - 2 minutes ago
Daniel Duncan rates have actually gone down. View
Rainer Busacker - 4 minutes ago
Andrew "Gunna Do" and his colleagues making promises that they could have carried out years ago with the Green Bins. View
Joshua Nash - 1 hour ago
i see the liberals are already recycling this policy View
Food & Wine 9

@The_RiotACT @The_RiotACT
Penrith coach Ivan Cleary's been handed a $20,000 fine for questioning the integrity of referee Gerard Sutton in his side's 28-12 win over the @RaidersCanberra https://t.co/YXBr6BVHUI (25 minutes ago)