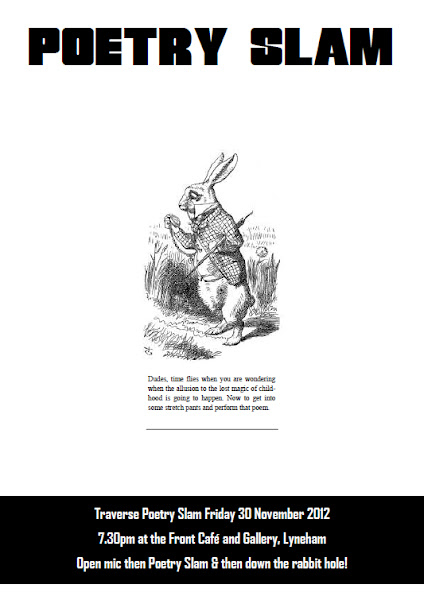 Not going to Corinbank until Saturday?

well we want you! Come along to the last front Slam for 2012!

The theme is “Undecided between Blues or Valhalla.”

The night opens with the open mic at 7:30 followed by the slam at 8
Join the slam and compete for cash prizes!

The features will be Steve Smart & Kim Jeffs from MELBOURNE!

The Slam will include the music of beauty and passion from
THE NIGHT CAFE, a latin/gypsy/jazz ensemble who will improvise intro/outro music for slammers and melt your nerves with their sultry sound.

Over the past fifteen years Steve has performed his work and that of others thousands of times in hundreds of venues across the world. He’s more famous than most people you know, but much less famous than Ryan Moloney who plays Toady in Neighbours.

Career highlights include ‘Mouth Off’ at the Sydney Opera House; the one man show ‘Wild Optimist: rises and falls of a performance poet’ (Brisbane Festival Under The Radar); performing at Bar Open’s 10th Birthday celebration (Fitzroy); winning the audience award for 24 Hour Fix (short theatre competition); and co-featuring at the Berkeley Slam in California. Upcoming events include feature performances at the 2012 WA Poetry Festival and the Queensland Poetry Festival.

Kim Jeffs’ writing began as a response to the Black Saturday fires – as therapy. She set out to create a small book of memories for her children. Instead, she found poetry. Or perhaps, says Jennifer Compton, poetry sent a wildfire to chase Kim to its arms.

Epicormic growth is the new shoots thrust out by trees burnt by inferno. It is the tree’s desperate attempt to remain alive – for without leaves for photosynthesis the tree will assuredly die. After catastrophe, we must grow. To remain static is to invite death. Kim’s poetry mirrors her recovery – intense, painful, bleakly humorous, but not without moments of joy.

It’s on at The Front!

Fiona Carrick - 7 hours ago
Hi Peter We are singing from the same song sheet. It is time the Government looked after our Town Centres! The Woden Town Cen... View
Community 8

Fiona Carrick - 7 hours ago
Great article Bethany Many people do not see the work volunteers do in the community. I was the president of the Woden Valley... View
Acton - 11 hours ago
A defence of conflutes means being out of touch with the majority of Canberrans who hate the things. Insulting their intellig... View
Opinion 9

Bill Gemmell - 8 hours ago
Jayne Bobby isn't it going to be a burn out pit? View
Jayne Bobby - 16 hours ago
Coolo Park would have been the perfect spot for a beautiful Floriade garden .... hopefully next year 🌹🌷💐🌺🌸🌼... View
News 4

tfx1 - 9 hours ago
A now bankrupt Australian economy and therefore the tax collecting Australian government is being asked to pay additional mon... View
Cary Elliot Johnson - 19 hours ago
Hmmmm. Sounds like a case could be made from the ACT Government and Shared Services who continually under pay penalties and a... View
Best of Canberra 28

Justin Bathurst - 11 hours ago
Have been seeing Kyle now for over a year. He's the only podiatrist I've seen who's taken time to work on the problem in an o... View
Property 1

Nick Swain - 12 hours ago
Mr Georgalis might like to check the extent to which the high rents being sought by some landlords in Kingston are keeping th... View
News 12

Capital Retro - 12 hours ago
I believe that is unprecedented. View
News 4

J D - 12 hours ago
My difficulty with Hare-Clarke is that IF that 'Election ACT' youtube video explanation is accurate, then the 'surplus' is re... View
ACT Election 49

russianafroman - 17 hours ago
Not about making the city "bland". It's about limiting pollution. I don't see how "using their own money" is a valid argument... View
Sport 11

russianafroman - 17 hours ago
In that case, why would you suggest we combine the two? Doesn't sound very fair to the mountain bikers to have their course d... View
Breaking 2

Ol L - 17 hours ago
He will be back when it’s all blown over, a classic politicians tactic View
Community 4

Maya123 - 18 hours ago
Wonderful project. Another project links people with compost, but nowhere to put it (they might live in an apartment for exam... View
News 82

Vandn Vandn - 18 hours ago
No...you merely need to be Tom Hanks or our precious Kylie to enter into Queensland and choose your place of self isolation..... View
show more show less
*Results are based on activity within last 7 days

@The_RiotACT @The_RiotACT
If you've rediscovered birds during COVID-19, what can you do with photos of everything from kookaburras to currawongs? Here's a call for citizens scientists contributions to the Canberra Nature Map https://t.co/yuVF7pnr5D (8 hours ago)

@The_RiotACT @The_RiotACT
Honey, I shrunk the trees: inside the small, but perfectly formed National Bonsai & Penjing Collection at the National Arboretum https://t.co/aMtOnCfrRT (9 hours ago)

@The_RiotACT @The_RiotACT
Canberra’s largest provider of children’s services is freezing its fees for the remainder of 2020 to help families during the COVID-19 pandemic https://t.co/hO225xgSZF (10 hours ago)