Now you can join Tim the Yowie Man’s adventures online 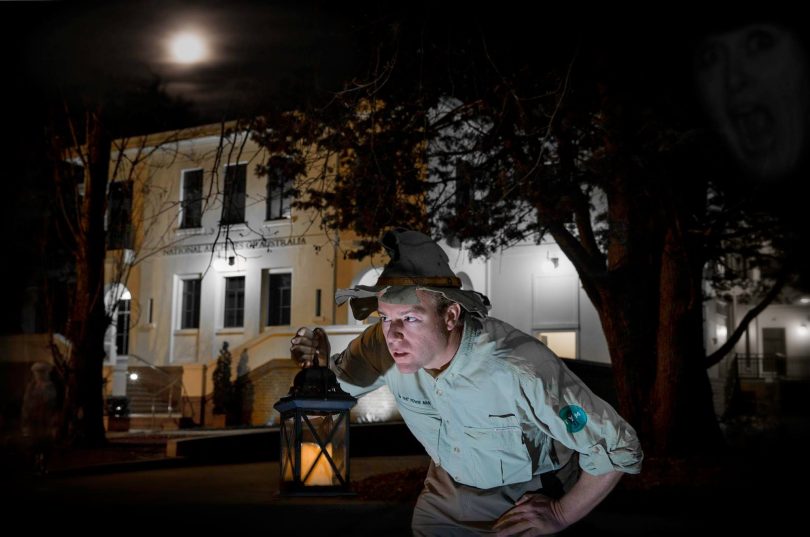 After two decades of seeking out the weird and wonderful, Canberra’s favourite paranormal adventurer is now moving into the digital space with Tim the Yowie Man, the Series.

But a select audience will preview the series at a special event at the National Sound and Film Archive on 18 October.

Mr Bush said the goal was to showcase the capital region’s lesser-known secrets and historical facets to the world, with an entirely Canberra assembled cast and crew.

“Tim’s taken his favourite stories from his 20-year career and rescripted them into eight 15-minute episodes for his series channel on YouTube,” he said.

There will also be three 2-3 minute ‘minisodes’ that focus on a person or a story, with the first – Under the Ice, Australia’s Trout Snorkeller – already up and running on YouTube.

Then there are the Yowie bites on Facebook – 10 x 60-second videos where Tim answers a question from his unusual career.

The main series includes the mystery of Lake George, the region’s Great Aussie Pies and the haunted mysteries of Burnima Homestead at Bombala, the original residence for the Governor-General and a proposed site for the national capital.

A second series planned for 2018 will be more Canberra focused, taking in the haunted locations of the national capital, hovercrafts at Wee Jasper, and stories from Collector.

Mr Bush said that a few years ago he had helped with an aborted Tim The Yowie Man TV pilot but had advised Tim at the time that his next move should be online.

When Tim retired from the Public Service last year to focus on his Yowie Man role he came back to Mr Bush and the past 12 months has seen them workshopping, scripting and creating, with the focus on YouTube and Facebook.

“It’s been a case of getting people re-interested in Tim,” Mr Bush said. “I told Tim ‘you need to offer yourself to the younger generation who don’t know you’.”

They have funded the project together and drawn on friends to crew the production.

There might be revenue streams down the track if YouTube takes off or if the project attracts corporate sponsorship, but there are also opportunities to plug into the local tourism market.

“But we have to have something to show them,” Mr Bush said. “The long-term plan is to have more of a community reach and involve local tourism bodies in the series.”